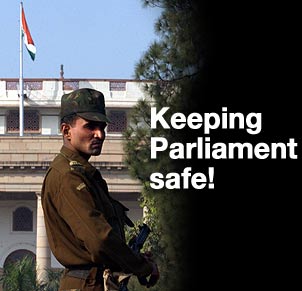 The daring attack aimed at the heart of India -- Parliament -- was as swift as it was unexpected. Five terrorists firing AK-47 rifles and lobbing grenades breached the security perimeter around Parliament House, but failed to enter the building. In the battle that followed, the terrorists, six security personnel, including a woman constable of the Central Reserve Police Force, and a gardener were killed.

India then promised itself that December 13, 2001, would never be repeated.

Home Minister L K Advani, who has since become the nation's deputy prime minister, was given the task of strengthening security measures around Parliament.

"A positive fallout of the [home ministry's] consultative committee meetings in the wake of December 13 was that parties across the political spectrum realised that terrorism was a global menace," says Minister of State for Home I D Swami. "One could no longer aim for political mileage by contending that terrorism was a bogey."

Opposition parties have consistently targeted the government on this issue, claiming that its 'apprehension' and focus on the 'bogey of terrorism' was just an excuse to 'foist' the radical Prevention of Terrorism Act on the nation. Over the last five years, the two sides have had bitter debates in Parliament on this issue.

While the attack on Parliament changed their stance on terrorism, many opposition members still believe that the ruling National Democratic Alliance coalition -- and the Atal Bihari Vajpayee-led Bharatiya Janata Party in particular -- 'clings to its penchant' for victimising Muslims by throwing up the spectre of terrorism. "Terrorism is a reality, but so are democratic rights. We will not allow the government to run amok," says veteran opposition leader Somnath Chatterjee of the Communist Party of India, Marxist.

Chatterjee adds that a vibrant opposition can never lower its guard when it comes to 'monitoring the government's omissions and commissions'.

The upshot of this tussle was the formation of a parliamentary committee to oversee security measures in and around Parliament House. The government, meanwhile, decided that access to government buildings and installations had to be restricted to discourage miscreants. Barring MPs, officials, certified journalists, technicians and peons having valid identity cards, all others are disallowed entry. Visitors to Parliament need security clearance from parliamentarians themselves, thus becoming their responsibility. These measures have been put in place to prevent unauthorised entry.

The joint parliamentary committee went abroad to shop for the latest security technology that would help secure Parliament House.

A Lok Sabha member, who declined to be identified, said the committee travelled to European countries since these countries lead the world when it comes to state-of-the-art security technology. Eventually, the Bangalore-based firm Ibex Gallagher Private Limited, which has a joint venture partnership with the New Zealand-based Gallagher Group Limited, was given the contract of installing a perimeter protection system around Parliament House and its adjacent office annex. The Lok Sabha member said the company's technology at high security sites around the world -- including military bases in Europe, prisons in Australia, and a diamond mine in Africa -- swung the decision in its favour.

According to the firm's Web site, 'fully tested by the Central Power and Research Institute for conformance to prescribed national and international standards and also by other recognised bodies like the Border Security Force Academy, Field Ammunition Depot, the Ibex-Gallagher Power Fence stands fully endorsed by the Intelligence Bureau for application at sensitive and terrorist-prone locations, including the central secretariat/Parliament House.'

New Zealand Trade Commissioner Peter Hobbs told rediff.com that while the installation of the security system is being done by Ibex Gallagher, the intellectual property for the fence belongs to the Gallagher Group Limited.

He explained that the electrified security system sends active pulses around the fence every 1.2 seconds. The fence is divided into 30 zones, each of which is monitored individually. Would-be intruders coming into contact with the fence receive a short, painful, but safe shock. Any tampering with the system activates an alarm and the affected side is immediately pictured on a central control computer that is monitored round the clock.

The new security measures that have been put into place mean that even MPs and ministers, no matter how influential, cannot take them for granted.

Only the prime minister, the deputy prime minister, the Lok Sabha speaker and deputy speaker and Rajya Sabha chairman and deputy chairperson are allowed to drive up to Parliament House. All other ministers and MPs have to walk to the main entrance after leaving their cars at the parking enclosure located more than 150 metres away. This rules out the possibility of any kind of suicide mission using an explosive-laden automobile.

The ministers and MPs, however, enter Parliament without being frisked or having to pass though the ubiquitous metal detectors.

Everyone else has to submit to these security measures. This includes accredited journalists. They also have to use a separate entrance and leave their vehicles outside the Parliament House complex.

The guards inside Parliament are trained to recognise the assistants accompanying ministers and MPs as well as Parliament staff like official reporters, stenographers and clerks. The latter, all of whom are government servants, have security clearances.

The guards are also trained to recognise the gardeners, sweepers and other personnel working inside the Parliament House complex. All of them, without exception, carry identity cards and are cleared by the home ministry, which periodically repeats the security checks.

Security personnel deployed in Parliament during the monsoon session were pulled up for allowing Balbir Singh, a small-time actor and lookalike of Union Health and Family Welfare Minister Shatrughan Sinha -- who was then minister for shipping -- to enter the Parliament House complex, walk about a while and leave undetected. The security personnel thought he was the minister because, like Sinha, he was walking around with his mobile phone glued to his ear.

"All this is the past," said a senior home ministry official, who is stationed in Parliament when it is in session. "We now take care that only bona fide people, whether they are ministers, MPs or members of the press, are allowed to enter the Parliament complex."

A secretary-level official in charge of ensuring the security measures told rediff.com that hidden sharpshooters man Parliament's terrace since October 2001.

On October 3, 2001, an alarm was raised that hijackers had seized an Alliance Air (Indian Airlines subsidiary) Boeing 737 en route to New Delhi from Mumbai on a late-night flight. The news caused much panic. Coming as it did on the heels of the September 11 attacks in the United States, it was believed that the hijacked aircraft could be crashed into the prime minister's residence or Parliament.

The secretary-level official, who spoke on condition of anonymity, added that Central Reserve Police Force jawans, their weapons at the ready, are also positioned at the various entrances to Parliament House. Parliament's inner security has been entrusted to the armed Watch and Ward staff, whose members are handpicked from the Delhi police.

Grateful parliamentarians never tire of recounting the bravery of Watch and Ward staff member J P Yadav, who was killed trying to protect his charge, Rajya Sabha Deputy Chairperson Najma Heptullah, on December 13. Yadav had challenged an unauthorised car (which was carrying the terrorists) heading towards Gate 2. The inmates of the vehicle replied with a hail of AK-47 fire. Yadav died within minutes.

Parliamentarians have been co-operating wholeheartedly with the strict security measures. "After all it is for the security of our country, our Parliament, and ourselves," said Samajwadi Party Lok Sabha member Akhilesh Pratap Singh.

CRPF jawans man Parliament's outer security cordon. CRPF Director General S C Chaube has told his troops that Parliament's security is in their hands and any trouble should be promptly and determinedly quelled.

The security of other government buildings and installations like the various ministries, Shastri Bhavan, India Gate, All India Radio and Doordarshan has been entrusted to jawans of the Central Industrial Security Force.

The CISF was earlier looking after the security of public-sector undertakings. But after some PSUs were privatised, the force found itself in financial trouble. To maintain the cash flow and put the force to good use, it has been asked to take care of the security requirements at Delhi's international and domestic air terminals and in other government installations in the capital. Soldier missing in Kashmir, may have been kidnapped