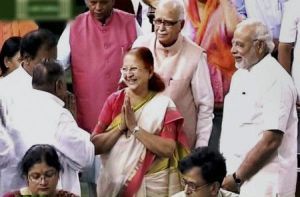 The Congress demand for being accorded the status of Leader of Opposition to its group chief in Lok Sabha was on Tuesday rejected by Speaker Sumitra Mahajan.

"I have gone by rules and tradition," she told PTI on her decision not to recognise the Congress leader in Lok Sabha as the Leader of the Opposition.

The Speaker's decision rejecting the Congress demand has been conveyed in a letter to the Congress party. Congress President Sonia Gandhi had written to Mahajan seeking the status of the Leader of Opposition to Mallikarjun Kharge who is the party's group leader in the House.

The Speaker had also taken the opinion of Attorney General Mukul Rohatgi who had said that Congress does not have the numbers so that its floor leader can be granted the status of Leader of Opposition.

Congress is the second largest group in the Lok Sabha with 44 seats after BJP's 282 and has been insisting that it should be given the status of Leader of Opposition.

However, citing rules, the Speaker has conveyed to the Congress that she was not in a position to give the party Leader of Opposition status because it fell short of the minimum 55 seats required for staking claim to the post.

Mahajan is also believed to have cited the precedents in 1980 and 1984 when there was no recognised Leader of the Opposition in Lok Sabha.

The Leader of the Opposition in both the Houses of Parliament enjoys the status of a Cabinet minister.

Reacting to the decision, Kharge said he would consult Congress high command and the AICC legal cell before giving his opinion.

"Being recognised as Leader of the Opposition is one thing and functioning as floor leader is another," he said.

The status of Leader of Opposition gains significance in the context of requirements of law relating to appointments of statutory bodies like Central Information Commission.

The appointments of CIC and Central Vigilance Commissioner are done by the President on the basis of recommendation of a three-member committee consisting prime minister, Home minister and the Leader of Opposition in Lok Sabha.

The chairperson and members of Lokpal are selected by a committee headed by prime minister and four members -- Lok Sabha Speaker, Leader of Opposition in the Lower House, the Chief Justice of India or a judge of the apex court nominated by him, and an eminent jurist who could be nominated by the President or any other member.

The Speaker had said yesterday that she does not have any personal discretion and that the House can change rules if it felt it was necessary.

"A Speaker is supposed to follow rules. I have to go by rules. There are 'Directions of the Speaker' which mandate ten per cent strength for a party in Lok Sabha to be recognised as Leader of the Opposition.

"If anybody wants a change in them, then a committee can be formed to look into them. But I need to follow the rules. I cannot do any thing on this," Mahajan had told PTI.

She had said that her decision on granting the status of LoP to any party was on the basis of the directions, which guide the functioning of the Lok Sabha chief, and precedents followed by others.

"The directions of the Speaker are very clear to decide on the LoP. I also took legal opinion before deciding on the matter," the Lok Sabha Speaker said.