Sonia Gandhi is cracking the whip on errant party MPs. She has made it clear that the strategy of confrontation with the government and disruption of Parliament proceedings will continue. Kavita Chowdhury reports. 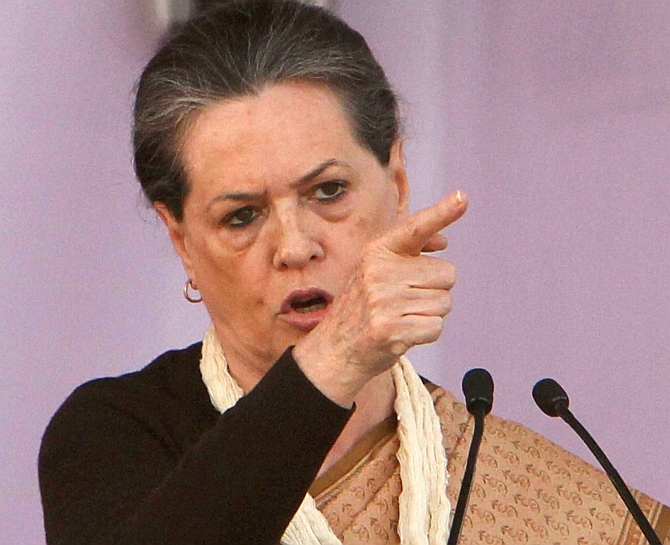 Congress President Sonia Gandhi is resolute that the party take on the government aggressively in Parliament on the 'ModiGate' issue and is no mood to have the party be portrayed as going soft on the government or on external affairs minister Sushma Swaraj.

Gandhi surprised party MPs at a meeting of its Lok Sabha members on Wednesday morning by angrily snubbing Shashi Tharoor, reportedly saying "You always do this, it's become a habit with you", while accusing him of breaking discipline and speaking to the media out of turn.

Media reports had said Tharoor was not keen on disruption of Parliament.

At the meeting, Gandhi also took up the issue of 'misinformation' -- of a supposed protest to be held by the Congress at the base of the Gandhi statue.

With no such protest planned, the party has asked that it be determined who and how this misinformation was spread to the media, with the perception being that it was scaling down its aggression.

Within minutes of the meeting, Tharoor attempted to allege that fellow party MPs had been revealing internal discussions to the media and misrepresenting his argument that the Congress should opt for debate on the floor of the Parliament and shaming the government, rather than disrupt the proceedings.

An angry Sonia Gandhi then cut him off by stating it was he more than other Congress members who interacted with the media and routinely broke party discipline.

Vice-President Rahul Gandhi then tried to ease the tension by referring to other issues. Sonia Gandhi later ignored Tharoor in the lobby at noon.

The Congress president, say sources, has dug in her heels and made it clear there would be no change in the strategy.

This is the reason she has been chairing daily meetings with Lok Sabha MPs, since the Congress is handicapped with a poor strength of 44.

At the meeting Gandhi minced no words and made it clear the government had to be made accountable and there was to be no easing of the pressure.

Speaking to reporters outside Parliament, when asked about the fusillade of charges by the ruling Bharatiya Janata Party against the Congress, she said, "Let them say what they want. We will continue to protest."

Tharoor is not liked by many fellow Congress members. The fact that he had spoken more in once to commend a move by the Modi government and was subsequently chided by the party for it is known fact.

More, he is known to share cordial relations with Sushma Swaraj.

So, his argument that the Congress should not disrupt Parliament but go for debate found few takers.

Incidentally, Swaraj had gone on record to acknowledge Tharoor’s effort as chairman on the standing committee on external affairs towards the land boundary agreement with Bangladesh and its unanimous report that the constitutional amendment in this regard be ratified.

Tharoor's attempt to ensure diplomatic behaviour in the present confrontation was regarded as being “non-political” by colleagues.

The signal had also gone out that not all in the Congress were on board with this stance for disruption and resignations.

As for the speculation on the non-holding of the protest march earlier mentioned, party sources said resorting to this in front of television cameras on the second day of Parliament would amount to exhausting all its ammunition at the outset, when there were another 16 more days to go.

The high command has, for now, read the riot Act to all and will be calibrating its position on a day to day basis, said party insiders.