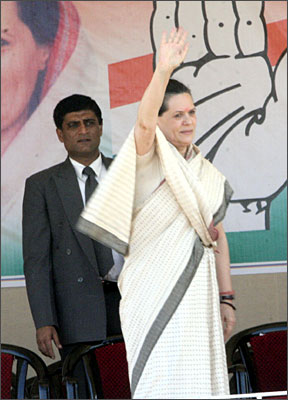 Sonia Gandhi is set to become Congress president again and her election will be ratified at the next AICC plenary which is likely to be held in Mumbai by the year-end when the party will mark 125 years of its formation.

Sonia, who has remained at the helm for 12 years, has created a record of being the longest-serving party president. She took over the reins of the Congress in April 1998 following the exit of Sitaram Kesri after the party's dismal showing in the Lok Sabha polls.

Congress leaders from Maharashtra, where the party has been in power for over a decade, have already approached the central leadership to hold the plenary in Mumbai where the party was formed way back in 1885.

Chief Minister Ashok Chavan and PCC President Manikrao Thakre met Sonia yesterday and discussed the preparation for the celebration of 125 years of the party and also the organisational elections in the state.

While no decision has been taken on the venue for holding the plenary, it is significant that Mumbai had hosted the 1985 centenary of the Congress when Rajiv Gandhi was the prime minister.

It was in Mumbai in August 1942 that Mahatma Gandhi had launched the Quit India Movement which eventually resulted in Independence five years later.

Party sources said that though 63-year-old Sonia was initially supposed to take over as party chief for the third consecutive time by the end of July, the process could be delayed slightly as Congress Working Committee is yet to finalise the election schedule.

There is, however, no immediate official word from the party on when the CWC would meet.

Party leaders said there was no "tight schedule" for the election as it depended on the report of the Pradesh Returning Officers of various states and the election of AICC delegates.