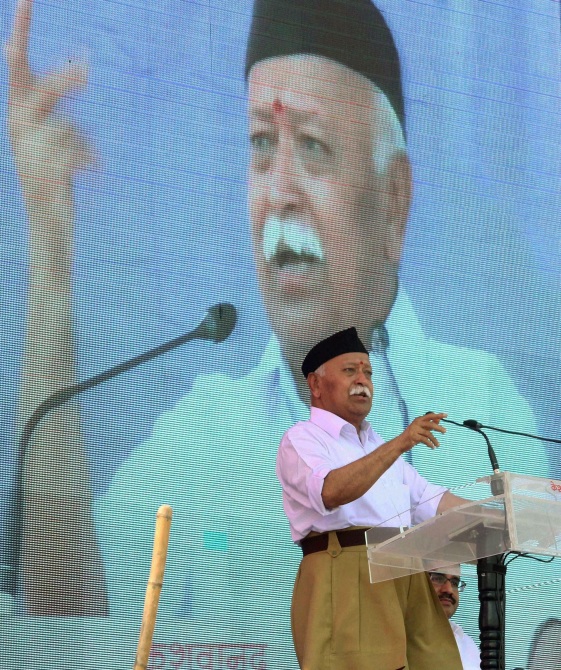 In his annual Dussehra address at RSS headquarters in Nagpur, Bhagwat hailed Dalit ikon B R Ambedkar for making provisions in Constitution to remove social and economic inequality faced by the weaker sections, a reference to the quota system, whose review he had recently suggested that pushed the Bharatiya Janata Party on the backfoot in Bihar polls.

In his 55-minute speech, telecast live by Doordarshan for the second consecutive year, he also called for a holistic discussion on population, saying its continuous rise becomes a burden.

"Small episodes happen. They get exaggerated and presented in a big way... Small incidents keep happening but it does not distort Indian culture, Hindu culture. Since time immemorial, it respects diversity, coordinates among diversities to establish unity... This is Hindutva," he said.

"Our country has stood as one and will stand as one. The Sangh has been doing the work of keeping the nation one on the basis of Hindutva for the last 90 years," he said

Bhagwat, however, refrained from making any direct reference to recent incidents of communal and caste tensions.

With several fringe Hindutva elements repeatedly demanding a curb on Muslim population, Bhagwat, without naming any community, favoured a "uniform population policy which is applicable to all".

He deplored that no holistic discussion has taken place in the country on controlling population.

"With rise in population, the burden on the country will grow. Population growth can be an asset too. If we have more mouths to feed, we will also have more hands to work. We have to plan for 50 years hence. How to provide for the education and health of the people," he said.

Praising the Centre, he said it had brought about hope and confidence among people that had hit rock bottom under the previous government and spoke about the pet schemes of the Modi government such as Jan Dhan, Swachh Bharat and Mudra bank.

Referring to rapid population growth, Bhagwat called for a dialogue to change the mindset of the people as mere enactment of laws was not enough.

He said the RSS "united" the society on its three beliefs of "Hindu culture, Hindu forefathers and Hindu land" pervading the Indian nation and insisted that this is the "only way".

"These three beliefs that unite our society will have to be established. This is what the Sangh has been working for. This is the only way that will result in something. This is the time," he said as he asked people to join the RSS as volunteers.

Bhagwat lauded the Modi government's performance on the global stage.

"A balance has to be struck...as we extend our hand of friendship, we have to protect our own interests too. This is what we are doing today," he said.

"In times of crises and natural disasters like the earthquake in Nepal, water crisis in Maldives or evacuation of people of various other countries from war-torn Yemen, India played a good role," the RSS chief said.

"Today, India's Yoga, Geeta and Tathagat are being discussed the world over," he said.

Bhagwat said India's external security was threatened by "enmity-minded" Pakistan and "expansionist" China, besides emergence of fundamentalist organisations like ISIS.

"We have to guard against them. Some young people are also getting misguided by the ISIS ideology. In his speech, Bhagwat repeatedly called for a dialogue for settling contentious issues.

Apparently referring to the Rajasthan high court's recent ruling declaring "Santhara", the Jain practice of voluntary fast-unto-death, as a punishable offence, a judgement which was later stayed by the Supreme Court, Bhagwat said, "There are Acharyas in every religion. There should be discussion with them before any change is made to their traditions....it hurts people," he said.

Amid accusations of attempts at saffronisation of the education system, Bhagwat said there was a need for reforming the sector to make it affordable to the common man.

"Commercialisation of education must stop. In the present times, a common man cannot even dream of pursuing many courses. The country cannot progress with education that only helps fill the stomach. It should be based on the social needs, it should inculcate values and conscientiousness," he said.

Calling for "greater synergy" among the government, administration and the society, Bhagwat said feedback from the ground was necessary for policies to succeed.