Slogans rent the air as Gen Rawat, wife are cremated

The plaintive strains of bugles sounding the last post broke through the hush, men in uniform clicked their heels and a 17-gun salute rang out as Gen Bipin Rawat and his wife were cremated on Friday evening -- the sun setting on a day written into India's military history and on the life of its most senior military officer.

India's first chief of defence staff (CDS) and his wife Madhulika Rawat were given a send-off with full military honours at the Brar Square crematorium in Delhi Cantonment, two days after they were killed with 11 others, all from the armed forces, in a helicopter crash in Coonoor, Tamil Nadu.

As millions watched on television and hundreds packed into Brar Square, the couple's two daughters Tarini and Kritika conducted the last rites of their parents taken away from them so brutally.

On a day of barely held back tears framed by the solemnity of the formal pageantry of a tri-services ceremony, thoughts were also with the families of those whose last rites could not take place because their bodies are at the Army Base Hospital awaiting identification.

Only three of the 13 bodies have been identified so far. Earlier in the morning, Brigadier L S Lidder, who was also on the Russian made Mi17V5 chopper and was defence assistant to the CDS, was cremated with honours at Brar Square.

Underscoring the enormity of the tragedy that had befallen the armed forces -- and India -- the evening was for the Rawats' last rites. About 800 service personnel were in attendance for the military funeral of their CDS.

Defence Minister Rajnath Singh, Law Minister Kiren Rijiju as well as politicians, diplomats and others paid their last respects to Madhulika Rawat and 63-year-old Bipin Rawat, who was tasked to bring in theatre command and jointness among the three services and was pushing it with a tough approach and specific timelines.

As a priest chanted Sanskrit shlokas, the 17-gun salute rang out in accordance with protocol and the twin pyres were lit.

Outside the Brar Square, where the funerals were conducted with military precision, huge crowds of mourners gathered to say their goodbyes. People showered flower petals and as the flower-bedecked gun carriage carrying the late general's mortal remains, wrapped in the tricolour, entered the crematorium, the only sounds that could be heard were slogans and chants in praise of him.

As the cortege wound its way through the streets of Lutyen's Delhi towards Brar Square, about 10 km away, surging crowds jogged alongside. It was a sea of people, some holding the tricolour aloft and others their mobile phones to capture the moment.

At one point, a man in a white kurta pyjama was seen running along the biers trying to take a selfie. Slogans of ‘Vande Mataram’, ’Gen Rawat Amar Rahe’  and ’Bharat Mata ki Jai’ could be heard too.

Military personnel drawn from all the three services marched on the streets as drummers played along in tribute to India's first CDS.

At several points through the journey, mourners stood with flowers in their hands to offer in tribute. And at some points, groups of people could be seen exchanging places with those who were accompanying the funeral procession on foot.

At the Rawat home in the morning, Union Home Minister Amit Shah, National Security Advisor Ajit Doval, Congress leader Rahul Gandhi and Chief Justice of India N V Ramana the host of people, including seers,  who laid wreaths on the mortal remains of Gen Rawat and his wife. Among them were some who belonged to Uttarakhand, the general's home state.

"After the cremation today at Delhi Cantonment's crematorium, we will be taking his 'asthi' (ashes) to Haridwar tomorrow," the Rawats' younger daughter Tarini told PTI.

The sisters, who stood in sombre silence next to the mortal remains of their father and mother as the large number of visitors streamed in, performed traditional rituals at their home before the funeral procession began around 2.20 pm.

Jaipur-based Vijay Rawat, 60, Gen Rawat's younger brother was there too.

"I had spoken to him before he went to Tamil Nadu to attend the function at Wellington. Had never thought fate would take him away from us," he said.

The Lidder family also spoke briefly of their grief.

Geetika Lidder, wife of Brig Lidder, 52, told reporters after the cremation that she feels more pain than any pride.

"Life is too long to spend but if this is the wish of God, we will live with it. This is not the way we wanted him back. It is a big loss," she added.

Her daughter Aashna Lidder said she is 17 and will keep all the good memories of the 17 years she spent with her father.

"I am happy he did not have to suffer. It is a national loss. My father was a hero," she said, adding that her father was a happy-go-lucky person and her best friend.

Gen Rawat, the country's first tri-services chief who would have completed two years at the end of this month in the new post after serving as the Army chief, was on his way to Wellington when the crash took place on a hilly, wooded area near Coonoor.

The lone survivor was Group Captain Varun Singh, who is undergoing treatment in Bengaluru. IMAGE: Kritika and Tarini, daughters of late Chief of Defence Staff (CDS) Gen Bipin Rawat and Madhulika Rawat, look on during the cremation of their parents at Brar Square crematorium, in New Delhi, Friday, Dec. 10, 2021. General Rawat was killed along with his wife and 11 armed forces personnel in an Indian Air Force (IAF) helicopter crash near Coonoor in Tamil Nadu on Wednesday. Photograph: Arun Sharma/PTI Photo IMAGE: Kritika and Tarini during the funeral ceremony of their parents. Photograph: Arun Sharma/PTI Photo IMAGE: Daughter of Chief of Defence Staff (CDS) Gen Bipin Rawat and his wife Madhulika Rawat during the cremation of her parents. Photograph: ANI Photo 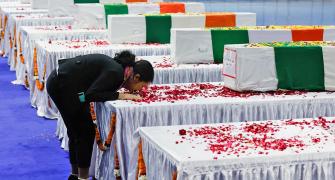 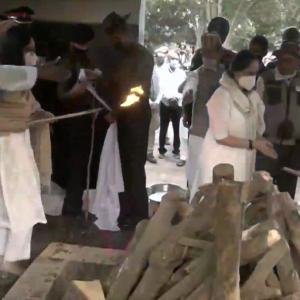 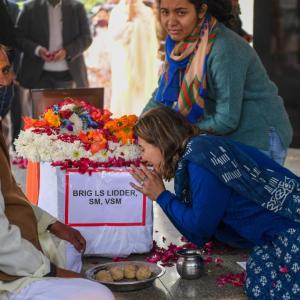