Locked in a neck-and-neck battle, Hillary Clinton and Donald Trump have made a last minute dash to key swing states to woo undecided voters as major polls on the final weekend before the election day showed the race for the White House was too close to call. 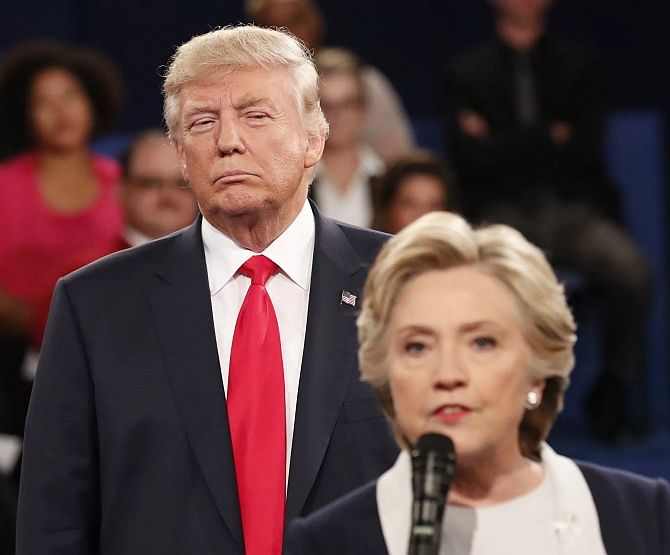 While Clinton is banking on star power to lock in her narrow poll lead, hosting weekend pop concerts with Beyonce and Katy Perry, Trump has embarked on a cross-country blitz through Iowa, Minnesota, Michigan, Pennsylvania, Virginia, Florida, North Carolina and New Hampshire.

Clinton and Trump -- along with their surrogates -- crisscrossed battleground states in their final push to rally voters and announced additional stops till late Monday.

Clinton, 69, would deliver her final address at a mid-night rally in Raleigh, North Carolina.

"Clinton will lay out her plans to create an economy that works for everyone, not just those at the top, and her vision for an America that is stronger together," her campaign said.

However, a bigger rally has been reserved for earlier in the night when Clintons -- Hillary and Bill -- would be joined by the Barack and Michelle Obama in Philadelphia. They will also be joined at the event by Jon Bon Jovi, who will perform.

Clinton will urge Pennsylvanians to elect her president on Tuesday and continue pushing for the "American ideals of progress, inclusion, equality and strength," that were enshrined in the Constitution in 1787, it said in a statement.

"Along with President Obama, she will also lay out how the division and dangerous views espoused by Donald Trump in his campaign make him unqualified, unfit and unworthy to lead this great nation," it said.

In a security scare, Trump was bundled off stage by Secret Service agents at a rally in Nevada after someone in the crowd shouted "gun" which led to a commotion.

A Secret Service spokesperson said in a statement that there was commotion in the crowd at the rally here when an "unidentified individual" shouted "gun," though no weapon was found after a "thorough search".

Clinton (44 per cent) and Trump (43 per cent) are in a fierce battle among likely voters nationally -- including those who are undecided yet leaning towards a candidate or who have already voted, McClatchy-Marist poll said.

In September, Clinton led Trump by six percentage points in the same poll.

Libertarian candidate Gary Johnson has the support of six per cent, and Jill Stein of the Green Party garners two per cent. Three per cent support another candidate, and two per cent are undecided, it said.

As per RealClearPolitics, which keeps track of all major polls, the Democrat leads the Republican by 1.7 percentage points.

Clinton leads 45 per cent to 43 per cent in a Fox News survey, within the poll's margin of error. Libertarian Gary Johnson earns 5 per cent and Green Party nominee Jill Stein takes 2 per cent.

Obama would continue with his election blitz by addressing rallies in New Hampshire, Michigan, and Florida.

Clinton's meetings are scheduled in Ohio, New Hampshire, North Carolina, and Michigan, while her husband Bill, a former US president, would seek vote for her in Michigan.

Senator Bernie Sanders, who lost to Clinton during the Democratic primaries, too has been campaigning extensively.

Trump may not have Clinton's celebrities, but he has relied on his family for public support at times. However, the electoral college might present a different picture, given the nature of presidential elections.

Lee M Miringoff, director of The Marist College Institute for Public Opinion, said: "Although Clinton and Trump are separated by the slimmest of margins, the Electoral College can present a very different picture. Close popular votes can, but do not necessarily, translate into tight battles for 270 electoral votes," he said.