Sign in  |  Create a Rediffmail account
Rediff.com  » News » 'Only after coming to power will we decide who will be the chief minister'

As Maharashtra Chief Minister Prithviraj Chavan celebrates three years in office, the BJP and Shiv Sena which hope to oust him when the state goes to the polls next year have reached a pact that they will stay silent on who the Opposition alliance's chief ministerial candidate will be, state BJP President Devendra Fadnavis reveals in an interview to Rediff.com

Devendra Fadnavis is one of the Bharatiya Janata Party's youngest presidents in Maharashtra, clearly chosen with an eye to woo the youth vote. 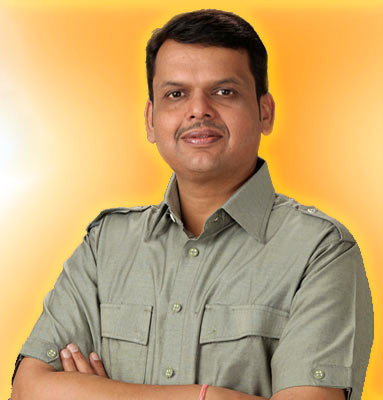 In a freewheeling interview with Rediff.com's Prasanna D Zore, the articulate Fadnavis, 43, discusses the forthcoming general and assembly elections in Maharashtra and if his party has a plan to get its long-time ally, the Shiv Sena, and the Raj Thackeray-led Maharashtra Navnirman Sena on the same platform so as not to split the state's Marathi votes in crucial urban centres like Mumbai, Thane, Pune, Kalyan and Nashik.

How are you going to sort out your differences with the Shiv Sena as far as seat sharing is concerned and the emotive issue of formation of Vidarbha as a separate state is concerned?

The Shiv Sena, after all, is vehemently opposed to the division of the state on the basis of regional identities.

So far as seat sharing is concerned, there are no differences between the Shiv Sena and the BJP.

We have agreed with the 26 for the BJP and 22 seats for the Shiv Sena in the Lok Sabha polls. We may discuss the exchange of a couple of seats and not more.

At the state level we will go with 119 for the BJP and the rest for the Shiv Sena (the Maharashtra legislative assembly has 288 seats).

For the state level, you will stick to the 119: 169 formula. The BJP will not ask for more seats?

As of now, the assembly is out of question. We are not discussing it; it is not on our agenda. As of now, we are focusing our discussions on the Parliament elections for which both parties have agreed on it (the 26:22 seat sharing).

'Mr Pawar's statement is directed towards the Congress'

There is a fear within some sections of the Shiv Sena leadership that the BJP might ally with the NCP (Nationalist Congress Party).

NCP President Sharad Pawar has stated that 'Nobody is an untouchable in politics' and that is causing heartburn among Sena leaders.

Absolutely baseless, absolutely untrue and by no stretch of imagination would we go with the NCP.

Mr Sharad Pawar's statement has nothing to do with allying with the BJP, but is directed towards the Congress to understand that he has his options open.

That's his signal to the Congress, not the BJP or the Sena.

So, the state BJP will not ally with the NCP for the assembly election?

Not at all. No question of tying up with the NCP.

'This is not the right time to discuss alliances'

What kind of role will the BJP play when it comes to the split of Marathi votes between the Shiv Sena and the MNS?

As of now, we have decided to fight this election in alliance with the Republican Party of India and the Shiv Sena. It will be the SS-BJP-RPI fighting as a cohesive unit.

If at the time of (state) elections, if things change, we will think about it.

Have you outlined the issues based on which you are going to fight the state elections?

Most of the national issues like corruption, non-governance, and non-performance also prevail at the state level.

If the SS-BJP-RPI alliance comes to power in Maharashtra in 2014, to which party will the chief minister belong?

Both the parties have decided that right now we will not decide upon the chief minister. Earlier we used to say that whoever gets more seats would claim the right for chief ministership. But that has proved to be counter-productive.

So, we reached an agreement that right now let us not focus on the issue. Let us focus on coming to power and defeating this corrupt government.

At the national level you have given clarity that Mr Narendra Modi will be your PM. Why not give the same clarity to Maharashtra's voters?

That is totally clear to the people -- in the Shiv Sena Uddhav Thackeray will lead and Gopinath Munde will lead the BJP in the state.

When Mr Nitin Gadkari was the national president he had declared that in Maharashtra the Lok Sabha as well as assembly elections would be fought under Mr Munde's leadership.

You have no consensus yet on who will be the state chief minister if the SS-BJP-RPI alliance comes to power?

So, what is that consensus?

I told you that is the consensus. Only after coming to power will we decide who will be the chief minister.

'The RSS works hard to create and build national character'

Also, the relationship between the state BJP and Shiv Sena have not been good of late with the latter feeling you may ally with the NCP or ditch them for the MNS.

I don't agree with your assessment. We have very good relations. We have been excellent allies for the last 35 years. It is okay that on certain issues we have difference of opinion. But this happens even within a party and we are two different parties.

We have come together on the larger issue of ideology that is Hindutva. So, ultimately we have our points of views and they have theirs on certain issues.

The Shiv Sena daily newspaper Samna says the BJP does not believe in Hindutva as staunchly as it once did.

Samna is a newspaper. As a newspaper they write these things. They have their freedom to do so. We would react or answer only if Mr Uddhav Thackeray says such things and not the newspaper.

Your clean image as a politician is being touted as the boon of being a RSS Swayamsewak. What kind of influence has the RSS played to shape your brand of politics?

The RSS is an organisation that works hard to create and build national character and patriotism of Indians. They believe in India's deep-rooted cultural ethos and staunchly believe in patriotism. These are the two mainstays of the RSS. That is the RSS's ideology.

When you talk of building a person's character the RSS feels that in every walk of life we should have honest people, honest leaders who are patriotic and believe in cultural nationalism.

I have been brought with this fundamental RSS ideology. And just because of this ideology I can practice clean and honest politics.