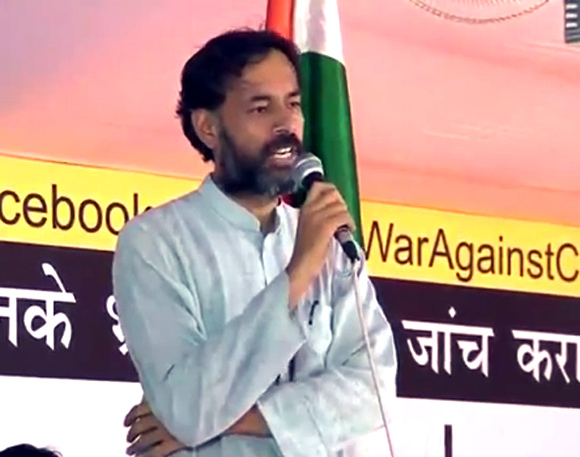 Given the nature of opportunity and feedback received during our membership campaign, I feel the people of the country are saying something to us, says Yogendra Yadav, senior leader of the Aam Aadmi Party. Somesh Jha reports

In his first television interview on Monday, Rahul Gandhi said the difference between the Congress and your party is that they have a structure. Do you think Congress is better off in this regard?

I don’t know who is better off but definitely Congress and other big parties have very settled structures. They have organisational roles, responsibilities, duties very clearly delineated and very large apparatus, which we don’t have. We are an evolving party where the shadow of the movement is very strong on us. We are still a bunch of amateurs struggling to see our way in the wilderness of politics. That is certainly a correct description.

President Pranab Mukherjee in his speech said populist anarchy can’t be a substitute for governance. Before that, Arvind Kejriwal had accepted the criticism that he is an anarchist. How would you react to the President's statement? Does the country need anarchy?

What would happen to language if irony is taken away from it? The statement that Arvind (Kejriwal) had made that day was obviously a statement meant to be ironic and the intent was nowhere hidden. If we begin to strip all the statements of this intent and read them as flat statements, we would live in a very poor world where there would be no humour, no irony and sarcasm.

As for the President, he can never be wrong, just as the Queen can never be wrong. The President’s address is a formal declaration open to interpretations. I refuse to believe that the President of our Republic would indulge in petty partisan politics and that he had any one party in mind, let alone a small party like ours. I also refuse to believe that the President fears people. I am sure he had in mind widespread corruption, unaccountable political practices, criminals dominating political proceedings and economic policies unaccountable to people. 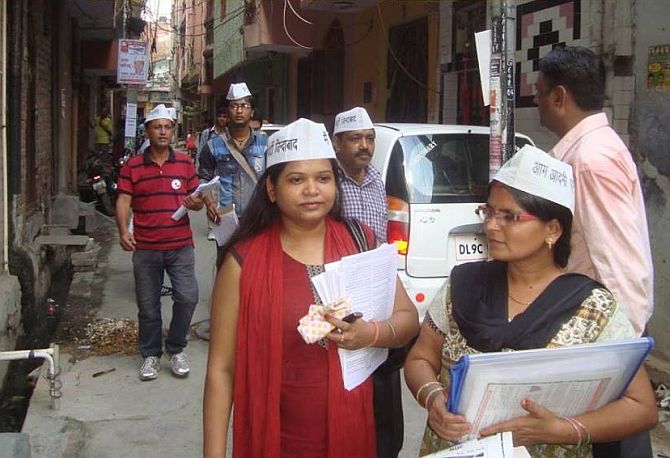 But Somnath Bharti had accepted it as a directive towards the party?

Talking of Bharti, the language he uses in public is something many are not comfortable with. In his tweet, he also mocked Mukherjee saying “Agitation? Lol. A good joke Mr President !!!” He has also made offensive comments about the Opposition. Many say he is the Digvijaya Singh of AAP...

We have officially reprimanded Bharti on his use of language and officially apologised to (BJP leader Arun) Jaitley and (lawyer Harish) Salve. These are his views.

AAP has been in government for just one month and it has plenty of trouble in hand. Binny's expulsion, Bharti’s case and divergent views on many issues. Don’t you think it is too soon for AAP to step into the national arena? Don't you think you should have waited to complete a single term to prove what you could do and fight bigger elections?

If we could shape the political calendar of India, no doubt this is what we would have liked. We would like to fight municipality elections first, followed by state elections in five years and Parliamentary elections five years thereafter. But unfortunately, opportunities and moments of history are not created by individuals who benefit from them. Actors are too small a people.

To quote a famous philosopher, ‘Men make their own history, but they do not make them in circumstances of their own choice’. So, the opportunity entrusted upon us is much bigger than what we had designed and what we were prepared for. To let this opportunity go away would be easy for us and bring relief to us personally. However, to those who think the opportunity will keep waiting for us and that millions of Indians, who for the first time can think something good can be done in politics, keep waiting for five years and have the same degree of enthusiasm five years from now, is a very simple view of history. That is not how history goes. 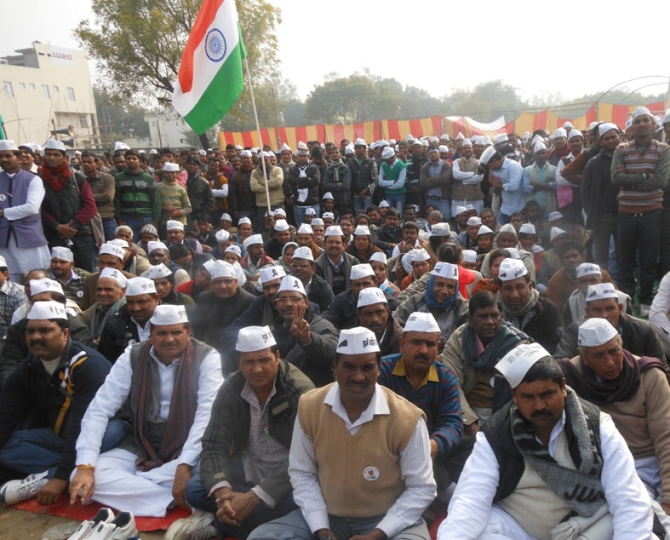 Image: Supporters of the AAP attend the rally in Amethi
Photographs: Sandeep Pal

But don’t you think the party, instead of fighting “as many seats” as it claims to contest, should go for good, limited seats with efficient candidates? Now the party has no time to examine all the candidates...

These are two legitimate views of our political strategy and there are pros and cons for both the views. If we contest fewer seats, we can be too sure, target our resources and can be safer. At the same time, there is a danger of missing a very large opportunity to speak to people of the country and offer an alternative.

On the second strategy, the advantage is that we can spread our message wide but there is also a danger of committing mistakes in the process. So, given the nature of opportunity and feedback received so far during our membership campaign -- touching a crore within 14 days, I feel the people of the country are saying something to us and which we cannot turn deaf ears to. There are risks and challenges, but we have to confront them.

Ever since 1984, the country has not seen a single term, which has been a majority government. Surely someone must have been responsible for unstable government other than AAP in the last 30 years. Surely we are not inaugurating a new era of instability in India’s political life.

AAP had sought to change India’s political system. It has got outside support from the Congress in Delhi. To bring in stability, can the AAP look to form an alliance in Parliament? Don't you think a bipartisan system like in the US is better than the Indian one?

On the last question, I have written over the years that I personally think that the fascination of some Indian intellectuals and commentators for the US-style two-party system is infantile because they have no understanding of the complexity of this country.

In a complex and large polity like ours, political power will always be coalitional in nature. It needn’t be a coalition of parties; it can either take the form of coalition among different parties or it can take the form of parties which are coalitional internally. That is how power has always been and therefore, government instability is not a big thing, political instability is a problem.

'We do not see ourselves either as Leftist or as Rightist' 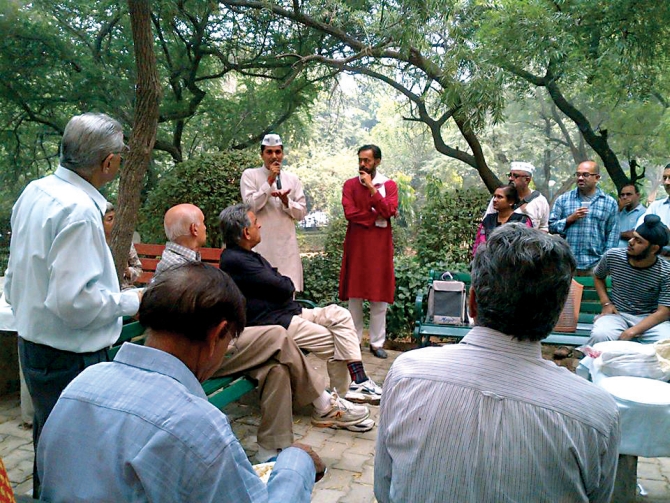 Can AAP look to form a coalition if it gets the opportunity to?

Our principal task is to create an alternative kind of politics in the country. Forming a government is the secondary objective in the process. Given the nature of mainstream parties and the politics they practice, it makes no sense for us to enter into coalition with any one of them. I would wish to underline we have not formed a coalition government, nor a tie-up, not even an understanding.

On economic policy, AAP’s stance suggests it finds no harm in giving doles to people. It also opposes foreign direct investment in the set-ups it finds inconvenient. Then how is it different from the Congress, which brought in FDI in multi-brand retail with a condition that states should agree to it?

I am surprised people think FDI is central to economic policy. It can be central to some but not to the Indian economy. I am surprised that one decision of the Delhi government is seen as a window to our economic philosophy. It is not the fulcrum of economic policy. Our party is yet to firm up its policy on economy and one or two declaration by Delhi government must not be seen as window of our economic philosophy. We do not wish to follow any of the doctoring of the past. We do not see ourselves either as Leftist or as Rightist. We do not believe in the magic of all powerful states, nor do we believe in the magic of unbridled market.

Your party has said that opposing FDI in retail is not its final position. Given the dole for water and electricity, could you fine-tune your policies at a national level for these things, too?

We have not announced any national policy on water and power subsidy. Subsidy is not our policy. It is only one of the mechanisms to achieve policy objectives. In some cases, it is a good way of doing it and in many other cases it is the most ineffective way of reaching to target audience. It has to be judged on the merits of a particular case.

On the recent dharna by Kejriwal, people seem to have a divided view on whether it was the right thing to do or not. An ABP- Nielsen survey showed that 50 per cent did not agree with this method. Even people at Kejriwal's alma mater IIT Kharagpur are divided on this. Also, it caused inconvenience to the public as three metro stations were shut. Do you believe the party should reconsider doing such things in the future?

Doing dharna or not is not our policy. We had clearly said in our Delhi manifesto that bringing law and order, police and land under the Delhi government is our policy and for that, we will take to the path of struggle. People do not read our manifesto and when they did, they were surprised. We had clearly said if we are in governance, we will take to the path of struggle, which is not to say that we will resort to it on issues of water, electricity, schools, which we are meant to run.

Dharna is the government going back to the people on an issue. It is different from a government which hits the street everyday, which is not what we wish to do. In the past month, we have responded to everything other than this one question without going for any street protest. It would be ridiculous for the government to say it will protest against itself on the issue of water.

Given the very strange situation in Delhi, where the elected government has no control over law and order and because that absurdity is written into the law, we have no option but to take to popular mobilisation to be able to remedy this. There is an absurdity and hypocrisy of all political parties, which say something in manifesto and do not implement it.