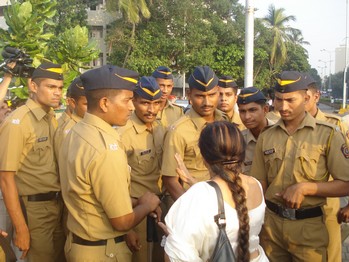 Image: Anuradha Gore (back to the camera) argues with a bunch of policemen at Marine Drive in Mumbai
Photographs: Abhishek Mande Abhishek Mande Mumbai
Mothers of soldiers killed during anti-terrorist operations in Jammu and Kashmir share their stories of loss. Abhishek Mande reports.

They stood on the side as a well-rehearsed event unfolded on the promenade opposite Hotel Trident in south Mumbai on the second anniversary of the 26/11 terror attacks last Friday.

As Bollywood numbers blared through the speakers, the emcee -- a young man in his late 20s -- urged the audience 'to show how patriotic you are'.

The crowds responded by throwing their hands in the air and shouting 'Jai Hind'.

One of them, Anuradha Gore, dressed in a white sari, walked up to the organisers and insisted on getting on to the stage.

Her angry demands met with little or no reaction as the programme went on. Bollywood music continued to blare and the crowds waited for the rally to be flagged off.

The star of the show -- Bollywood actress Raveena Tandon -- was unsurprisingly running behind schedule.

Gore tried her best to make it to the stage, unsuccessfully. Finally she gave up and sat on the promenade with the other four.

The group introduced themselves as 'Shaheed families,' a phrase used to refer to families of slain soldiers.

They were here to protest against the show of solidarity for those killed during the 26/11 terror attacks.

Gore said their grouse was against the citizens of Mumbai, their tokenism and the absolute apathy towards those brave men who had made the ultimate sacrifice to defend India.

Two of the women from the group shared their stories of loss and the sense of betrayal they felt from Mumbaikars.

These are their stories: 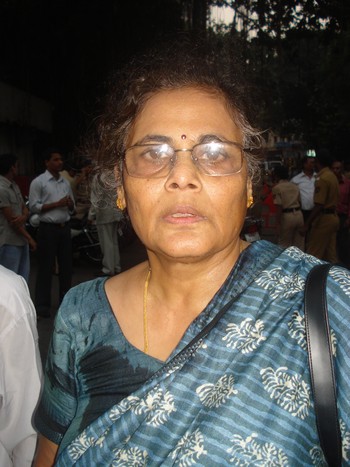 Geeta Kapadia walks with the zest of a person on a mission.

Not surprisingly, you discover she is a trekker. Along with her husband, the well-known mountaineer Harish Kapadia, she has visited the remotest parts of the country.

Her son Nawang once spent six weeks in the Siachen area. When he returned, he told his parents he had found his goal. Nawang wanted to join the army.

The disbelief in his mother's voice is evident ten years after she lost Nawang.

Nawang was a member of the Fourth Batallion, Third Gorkha Rifles, posted to Jammu and Kashmir to counter terrorists being sent into India from Pakistan.

On November 10, 2000, his battalion received information about terrorists hiding in the forests of Rajwar near Kupwara.

The next morning Lieutenant Nawang Kapadia led a platoon to locate the terrorists when they came under fire. It was 11 am.

As a jawan fell mortally wounded, the lieutenant instinctively rushed to rescue his colleague when a bullet was fired into Nawang's face.

It was his first encounter with the traders of terror dispatched from Pakistan.

Nawang was only 25 years old.

Kapadia recalls with some bitterness the headlines doing the rounds in local newspapers when her son came home for the last time.

"For three days after his death the only stories we read were of a corporator's death and lovers being killed. The media doesn't bother," she says. "They only remember us on January 26 and August 15."

"For you (Mumbaikars), Kashmir is so far removed, isn't it? What happens there doesn't concern you."

"But don't you see the children who died there are not just my children? They are yours too. Don't you see it?"

Kapadia pauses as if to search for words. You notice she is trying to hold back her tears.

ALSO READ: In memory of an army officer slain in battle

When she heard the knock, she knew 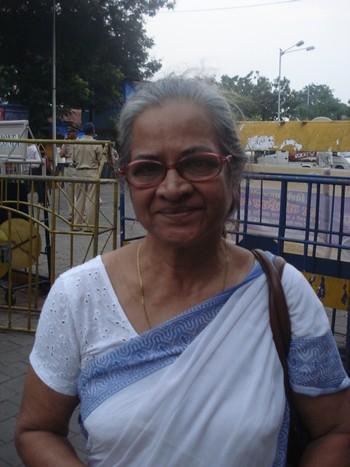 Image: Grace Acharya
Photographs: Abhishek Mande
Back in the 1960s when a young Catholic decided to marry a Hindu priest's son, it created a ruckus.

Grace Acharya lost her husband early, but decided to stick her thumb out at life.

She raised three children -- two girls and one boy -- all by herself.

In college, her son Yashen decided he wanted to join the army.

Acharya remembers the day "as if it were yesterday."

Yashen was posted in Pulwama, Jammu and Kashmir. Along with his troops, he had laid siege to a site where the terrorists were hiding.

"He was with two of his men. When the soldier in front of him was shot, he stepped in to take his place." Yashen was shot in the chest and palm, and died later. His other colleague was also killed.

"I was at Chennai with my daughter-in-law and grandson when they came."

Acharya heard the knock on the door and knew something was wrong.

Her son had told her what officers went through when they had to inform the families of martyrs.

Seeing the officers on her doorstep, Acharya realised it was her turn. She fainted.

Sitting by the sea, Grace Acharya says she has no regrets. "Yashen means success," she says. "He achieved it before he went away. That is all that is important."