The present Lok Sabha witnessed a 'general decline' in the number of sitting days, but spent 32 per cent of its time on legislative business, which was higher than the average of previous Houses, a think tank said on Wednesday.

During the 16th Lok Sabha, 180 bills were passed and 45 ordinances promulgated.

Some of the major issues discussed in Parliament were the agrarian crisis in the country, inflation and various natural calamities.

According to data compiled by PRS Legislative Research, the present Lok Sabha during its various sessions between June, 2014 and February this year sat for 331 days.

On average, past full term Lok Sabhas sat for 468 days.

Wednesday was the last day of the Budget session, the last session of the National Democratic Alliance government ahead of Lok Sabha elections due this summer.

According to Parliamentary Affairs Minister Narendra Singh Tomar, the present Lok Sabha passed 205 bills and the productivity was 85 per cent.

For Rajya Sabha, number of sittings was 329, and it passed 154 bills. The productivity was 68 per cent, Tomar said.

The productivity of Lok Sabha was 89 per cent and 8 per cent for Rajya Sabha in Budget session which ended Wednesday. The January 31 to February 13 session had 10 sittings.

Compared to the first Lok Sabha, later ones spent less proportion of time on legislative business.

This Lok Sabha spent 32 per cent of its time on legislative business, higher than the average of other Lok Sabhas, which was 25 per cent.

The 16th Lok Sabha spent 13 per cent of its time on question hour, 10 per cent on short duration discussions, and 0.7 per cent on calling attention motions.

In the 16th Lok Sabha, a no-confidence motion was moved against the government and discussed in the Monsoon Session of 2018.

This was the 27th time a no-confidence motion was discussed since the first Lok Sabha. It was discussed for 11 hours 46 minutes and was defeated.

According to the government, 180 bills were passed in the past five years.

The data said, 32 per cent of the bills were discussed for more than three hours in Lok Sabha. This is higher than the previous two Lok Sabhas (22 per cent and 14 per cent in the 15th and 14th Lok Sabha respectively).

Although more bills have been discussed for longer, this Lok Sabha has referred a significantly lower proportion of bills to standing committees for scrutiny.

In the 16th Lok Sabha, 25 per cent of the bills introduced were referred to standing committees, much lower than 71 per cent and 60 per cent in the 15th and 14th Lok Sabha respectively, the data said. 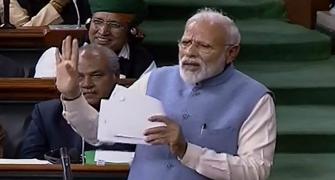 In his final address to 16th LS, Modi mocks Rahul over Rafale, hug 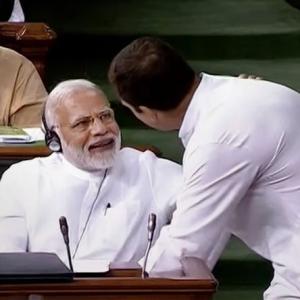