Recognising the threat posed by outfits like the Al Qaeda, Lashkar-e-Tayiba and the Dawood Ibrahim network, India and the United States have agreed to deepen cooperation in fighting terrorism and asked Pakistan to bring to justice the 2008 Mumbai attack perpetrators. 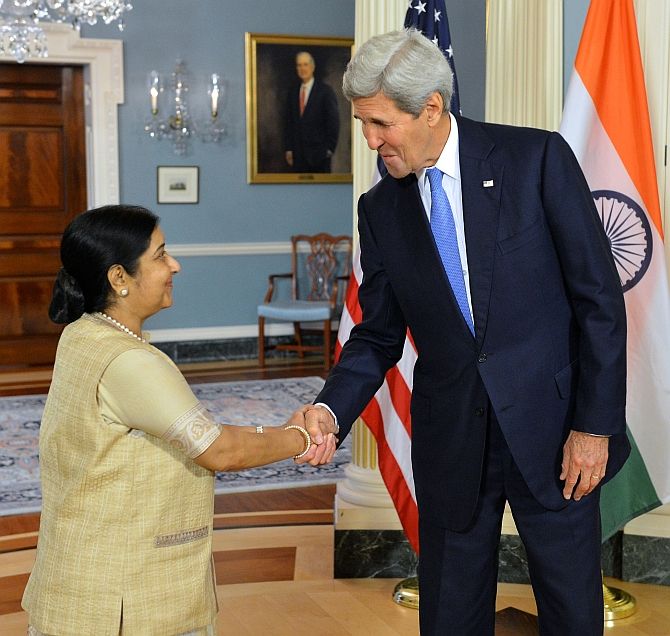 US Secretary of State John Kerry and External Affairs Minister Sushma Swaraj co-chaired the first India-US Strategic and Commercial Dialogue that ended with the important takeaway of a joint statement on combating terrorism, recognising the threat posed by terror groups operating from terror safe havens within the South Asia region.

India and the US decided to take their counter-terrorism cooperation to the next level in view of the continued danger faced from terror groups and the emergence of the new global threat from the Islamic State.

At the conclusion of the dialogue, India and US issued a separate joint statement on counter-terrorism co-operation, pledging to fight terrorism together.

Swaraj said the joint statement reiterates commitment of the two countries on common approach against terror groups like LeT, Haqqani network and the D-Company.

"We (India and the US) reiterate that the threat posed by Al Qaeda, Lashkar-e-Tayiba, Jaish-e-Mohammad, D-Company (Dawood Ibrahim), Haqqani network and other regional groups undermines stability in South Asia. And we call on Pakistan to bring to justice the perpetrators of the 2008 Mumbai terrorist attack," Swaraj told media persons while reading from the joint statement.

"We (India and the US) strongly condemn the July 27, 2015 terrorist attack in Gurdaspur, Punjab, and August 5, 2015 attack in Udhampur," she said of the terror assaults in India which were carried out by terrorists based in Pakistan.

Swaraj said the joint statement states that the two countries are determined to fight terrorism to the end.

In response to a question, Kerry said the two countries are committed to bringing all their efforts together in this fight against terrorism.

Another significant outcome of the parleys coming just ahead of Prime Minister Narendra Modi's meeting with US President Barack Obama in New York next week was that both sides set up a new mechanism of dialogue between India's foreign secretary and US deputy secretary of state on regional and global issues.

After the talks, Swaraj listed six key points as takeaways from the dialogue with the most important one being stepping up cooperation in fighting terrorism.

The two countries also decided to elevate the secretary-level trilateral with Japan to a ministerial-level. Kerry and Swaraj would meet their Japanese counterpart in New York next week on the sidelines of the UN General Assembly session.

Responding to questions, both Kerry and Swaraj refuted reports that the India and US meeting was aimed at China.

"It has nothing to do with China," Kerry asserted. There is no message intended to be sent to China through this strategic and commercial dialogue, he said.

Swaraj said China did not figure in the talks at all.

"This is a bilateral dialogue," she said, adding that any apprehension about India and US coming together against China is mistaken.

There is no effort about India and US coming together to increase their influence in any part of the world, she said. 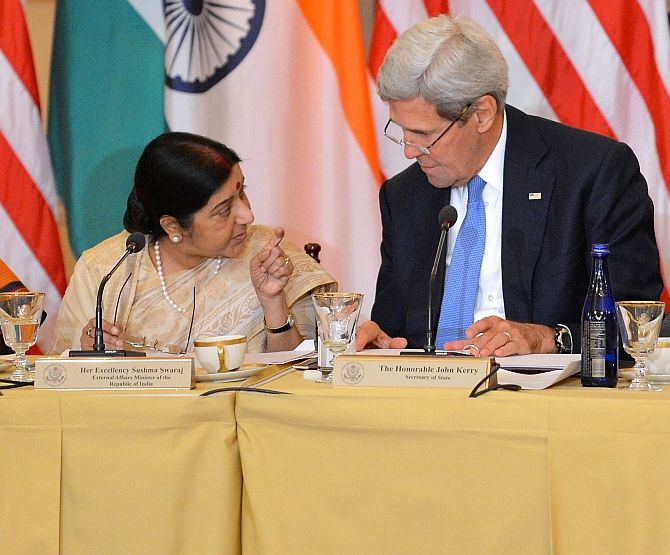 Kerry also announced that India and the US have also signed a memorandum of understanding on cooperation in the field of climate change and renewable energy. It also decided to launch a Fulbright Climate Fellowship programme.

In another important outcome, India and the US decided to train troops in six African countries before they are deployed on a UN Peacekeeping mission. Kerry described this as a milestone.

The two countries reaffirmed their commitment to a secure and stable Afghanistan and agreed to launch an Ocean Dialogue, an issue close to Kerry's heart.

Both Swaraj and Kerry described the meeting as "meaningful and productive".

"Our discussions have been most productive and fruitful and allowed us an opportunity to assess and review all the good work being done on both sides in different fields. We have also charted new ideas and initiatives to further strengthen our bilateral cooperation in different domains," Swaraj said in her statement at the press conference of First India-US Strategic and Commercial Dialogue.

Swaraj said that in her meeting with Secretary Kerry, they shared India-US' strategic priorities, interests and concerns on issues of mutual interest including security and
counter-terrorism, convergences in India's Act East policy and the US re-balance in Asia.

"We have agreed to step up our cooperation in fighting the menace of terrorism. We have recognised the threat posed by Lashkar-e-Tayiba and other groups operating from safe havens in our region and the need for Pakistan to bring to justice the perpetrators of the 2008 Mumbai attacks," Swaraj said.

"A main take-away from our discussions includes our shared view that we need to keep the big picture, the strategic framework of relationship in mind, especially when it comes to our strategic security and political interests, regionally as also internationally, as also when we deal with transactional issues," she said.

"We also talked about creating new substantive underpinnings to deepen bilateral engagement including in the fields of defence, security, cyber, energy, climate change, science and technology, space, health, and other areas of economic development," she added.

The Indian side also welcomed US' reiteration of support for India's membership of the four major multilateral export control regimes including the NSG.

"We spoke of India's aspiration for greater participation in internet governance organisations such as ICANN and related bodies. We agreed to convene a Track 1.5 programme to further cooperation on internet and cyber issues in this regard," Swaraj said.

"We recognise climate change as one of the most pressing challenges of our times. We have agreed to maintain close consultation in the run-up to the COP-21, the Paris Conference of Parties under the UN Framework Convention on Climate Change," she said.

Swaraj said the two sides are also looking at an early extension of the US-India Technology Safeguards Agreement to facilitate US satellite components on Indian commercial space launch vehicles for another 10 years.

"To sum up, we have had a most productive exchange of views today on bilateral regional and global developments. In our assessment the dialogue would drive forward the strategic relationship and advance domain specific bilateral functional engagement," she said.

"I have also invited Secretary Kerry and his other Cabinet colleagues to visit India next year for the second round of the Strategic and Commercial Dialogue. We look forward to continuing our discussions with the US leadership," she added.

US Commerce Secretary Penny Pritzker said remarkable progress has been made in the strategic and commercial ties, which would help realise the full potential of bilateral trade and increase it to USD 500 billion.

Pritzker welcomed the decision of the Indian government to purchase Apache helicopters from Boeing. This she said reflects Modi government's commitment towards ease of doing business.

In a tweet soon after the conclusion of the dialogue, Kerry thanked Swaraj.

"Grateful to my friend and colleague Sushma Swaraj and her team for joining us in another productive US India Strategic and Commercial Dialogue," the top American diplomat said.

"Much accomplished at US-India S&CD," he wrote.

"US India relationship one of most important bilateral relationships in the world," Kerry tweeted.

Apart from terrorism, five other important takeaways from the meeting highlighted by Swaraj were -- new mechanism of dialogue between India's Foreign Secretary and the US Deputy Secretary, US reiteration of support for India's membership of the four major multilateral export control regimes including the NSG, internet governance, climate change cooperation and space cooperation. 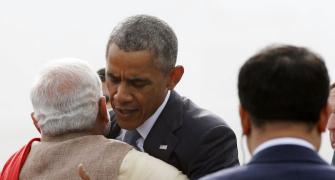 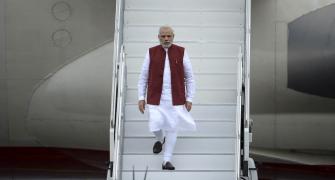 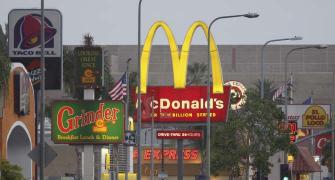 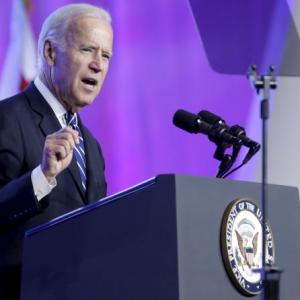 Come on board on climate change: Washington tells Delhi