Canada's Parliament came under attack on Wednesday with a barrage of gunshots fired both inside and outside the building as a soldier was killed in the assault and a man with a rifle was gunned down by security forces.

Parliament Hill came under attack when a man with a rifle shot a soldier standing guard at the National War Memorial in downtown Ottawa, before seizing a car and driving to the doors of building's Centre Block nearby. The injured soldier later succumbed to his wounds.

"Condolences to family of the soldier killed and prayers for the parliamentary guard wounded. Canada will not be terrorised or intimidated," Employment Minister Jason Kenney said on Twitter.

"One shooting victim succumbed to injuries. He was a member of the Canadian forces. Our thoughts and prayers are with his loved ones," the Ottawa Police and Royal Canadian Mounted Police said.

"One male suspect has also been confirmed as deceased," they said.

The motive of the attack was not known but it came two days after a recent convert to Islam killed one Canadian soldier and injured another in a hit-and-run before being shot to death by police. Ottawa police confirmed shots were fired in three locations: the war memorial, inside Centre Block of the Parliament and at the Rideau Centre.

Police said an investigation was continuing and did not confirm earlier reports that more gunmen were involved.

In a chaotic scene, witnesses said a sustained volley of shots was fired as startled security personnel and political staff scrambled to take cover in the limestone alcoves with bullets flying past. 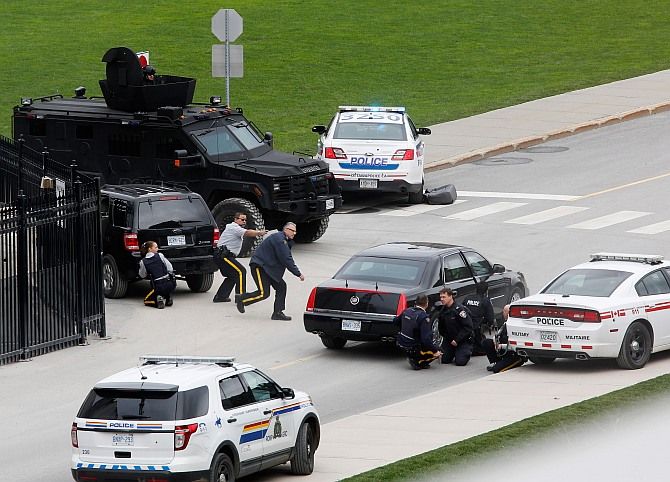 Alain Merisier, who works at the cafeteria in one of the Parliament Buildings, said he saw a man in a car at the Centre Block with a long gun.

There were unconfirmed reports that a person was injured outside the Library of the Parliament.

"We were waiting there for a city tour and suddenly I heard four shots," said Jan Luchtenburg, a tourist visiting Ottawa from Holland.

"Suddenly I saw a small guy with long black hair... with a long rifle, and he ran away after the shots, across streets in the direction of Parliament Hill," he said. The National War Memorial stands in Confederation Square in the heart of downtown Ottawa. The Parliament Buildings are to the northeast.

Scott Walsh, who was working on Parliament Hill, said he saw a man running with a double-barrelled shotgun, wearing a scarf and blue jeans.

The US Embassy was also locked down after reports of shots being fired.

The US and Canadian air defenses were placed on heightened alert after the shootings.

The attack came two days after a recent convert to Islam killed one Canadian soldier and injured another in a hit-and-run before being shot to death by police. 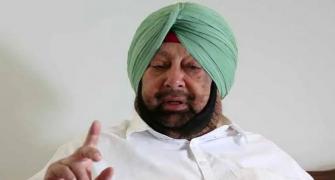