A journalist, who had hurled a shoe at Union Home Minister P Chidamabaram, on Wednesday alleged he was roughed up outside a Delhi court following the hearing in anti-Sikh riots cases against Congress leader Sajjan Kumar.

Jarnail Singh filed a written complaint with Karkardooma court police post apprehending threat to his life and alleged that one Atma Singh Lubana and others used abusive words against him and tried to push him around this afternoon.

"Lubana, who is alleged to have won over witnesses in 1984 anti-Sikh riots cases, also threatened me with dire consequences in the presence of police personnel," he said in the complaint, demanding action.

Following the incident outside the gate of Karkardooma courts complex, Singh said he was taken to the police post after intervention by the policemen present at the site.

Sajjan Kumar, the former Outer Delhi Member of Parliament along with others on Wednesday appeared before a Delhi court which granted them bail in two anti-Sikh riots cases.

Scores of Sikh protesters had gathered outside the court raising slogans and demanding action against the guilty in the matter.

Singh had lobbed a shoe at a press conference of Chidambaram on April 8 last year following the Central Bureau of Investigation's clean chit to former Union minister and Congress leader Jagdish Tytler in the anti-Sikh riots case.

Source: PTI© Copyright 2021 PTI. All rights reserved. Republication or redistribution of PTI content, including by framing or similar means, is expressly prohibited without the prior written consent.
Related News: Jarnail Singh, Outer Delhi Member of Parliament, Sajjan Kumar, Atma Singh Lubana, Central Bureau of Investigation
SHARE THIS STORY
Print this article
'Why did I have to sacrifice my life for the cause of justice?' 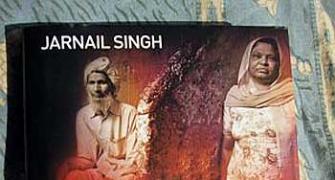 For 1984 riot victims, peace is still elusive
No relief for Sajjan Kumar in 84 riots case 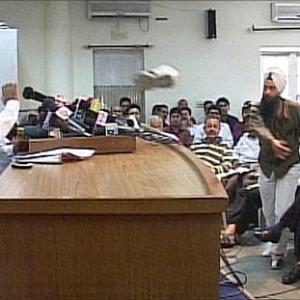