There was no 'power' for Home Minister P Chidambaram on Tuesday while the promotion of Power Minister Sushilkumar Shinde as his successor on a day when unprecedented electricity failure hit the country was described as an 'irony'.

Lights went off for a couple of seconds when Chidambaram was giving a monthly report card of his ministry during his interaction with the media at the Press Information Bureau conference hall in the heart of the Capital.

Alleging that 'good governance' is not on the agenda of the Congress-led United Progressive Alliance's, Bharatiya Janata Party's chief spokesperson Ravi Shankar

Prasad took a dig at Shinde's appointment, saying it is ironical that he has been moved to Home Ministry on a day when grid failures affected half of the country's population.

"It is an irony that the reshuffle has happened on a day when power failure has happened," the BJP leader said.

Just hours before he was moved to the finance ministry, Chidambaram ducked a question on reports that he would soon get back his old portfolio, saying he was 'content' with his current job.

"I don't think so. I am very happy to meet you once in a month. I am content to do the job I am doing and we will meet next month," he told reporters when asked whether Tuesday's media interaction would be his last press conference as home minister.

About reports that a notification has gone to Rashtrapati Bhavan for the approval of President Pranab Mukherjee to appoint him as the new Finance Minister, Chidambaram said "I am too small a person for the President to tell me". 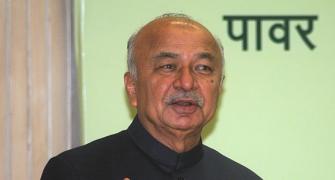