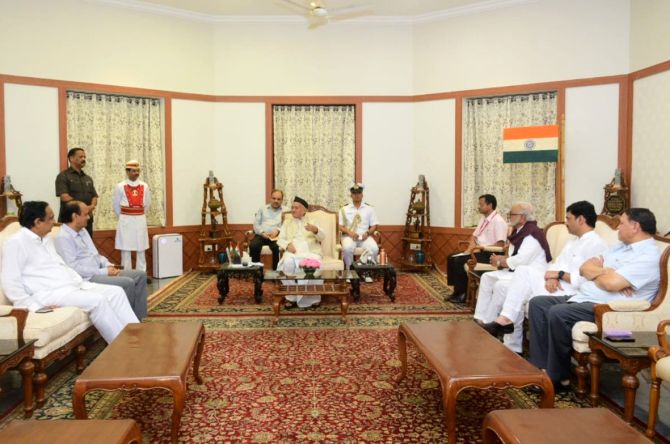 He said the NCP will discuss the issue with its ally, the Congress, and get back to Koshyari by or before 8:30 pm on Tuesday.

Patil, however, didn't mention government formation while talking to reporters.

The Sharad Pawar-led NCP has 54 MLAs in the 288-member assembly which is the third largest party after the Bharatiya Janata Party (105) and the Shiv Sena (56).

"As per the procedure, the governor has given us a letter being the third largest party in the state of Maharashtra and therefore, we have suggested to him that we will have to talk to our alliance partner. We have assured him that we will get back to him as early as possible," Patil said.

The governor called NCP hours after the Shiv Sena suffered a setback in its efforts to cobble up a non-BJP government in Maharashtra with the Congress at the last moment announcing its decision to hold more talks with ally NCP on supporting the Uddhav Thackeray-led party.

Speaking to reporters outside Raj Bhavan after meeting the governor, Sena leader Aaditya Thackeray said "two parties" (read the Congress and the NCP) have agreed "in-principle" to support the party-led government, but the governor refused additional time sought by his party to muster numbers.

Putting up a brave front, Aaditya said the Sena's claim on formation of a government still stands.

"We have initiated talks with two parties. Both the parties have expressed their in-principle support to the Sena," he said without taking names of the Congress and the NCP.

"We informed the governor about our willingness to stake a claim for government formation. Shiv Sena MLAs have already issued their support in written," Aaditya added.

He said the two parties need a few more days to complete their procedures, "hence we sought time from the governor but he refused to grant it."

Aaditya, son of party chief Uddhav Thackeray, further said they would come to Raj Bhavan soon and stake the claim for government formation.

"The process to form a government in Maharashtra will continue," he said.

Aaditya said the governor granted only 24 hours to the Sena to express its willingness to form a government.

"We want to offer a stable government in Maharashtra and we will continue our efforts," he added.

The Congress on Monday held marathon discussions and a meeting of the party's highest decision-making body, the Congress Working Committee, but remained indecisive on whether to support a Shiv Sena-led government in Maharashtra.

After hours of deliberations, the Congress decided to hold further talks with ally NCP, while keeping its options open on participation in the new government.

Sources said top leaders of the party's core group will meet at the residence of Party president Sonia Gandhi at 10 am on Tuesday to discuss the issue.

"The Congress president has spoken to Sharad Pawarji. The party will have further discussions with the NCP," a statement issued by Congress general secretary K C Venugopal said after the second meeting of Congress leaders.

After two crucial meetings, the top leaders of the party preferred to have a detailed discussions with the NCP on the political impasse in the state.

"The Congress Working Committee met this morning and held a detailed discussion on the situation in Maharashtra after which a consultation was held with Maharashtra Congress leaders," the statement further said. 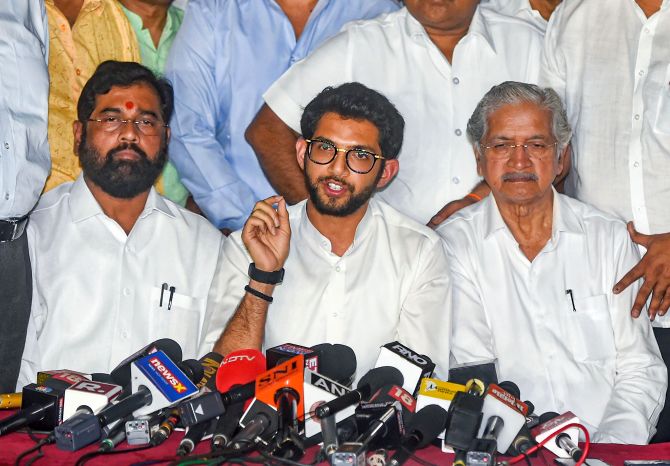 In a telephonic conversation with Sonia Gandhi, Shiv Sena Chief Uddhav Thackeray sought her party's support to form government, but she did not commit anything to him, the sources said.

Asked about the telephonic conversation between Sonia Gandhi and Thackeray, he said it was a "courtesy call" and only pleasantries were exchanged but no commitment was made.

Sonia Gandhi is learnt to have told Thackeray that she is yet to talk to Congress MLAs in the state and no decision has been taken yet on whether to lend support to the Sena, the sources said.

The CWC, comprising the top party brass, first discussed the issue on whether to extend support to the Shiv Sena and later decided to hold further discussions with state leaders on the issue. The CWC meeting did not take any decision in the morning and deferred it till evening.

After the second meeting with Maharashtra Congress leaders, the party decided to defer its decision again till further talks with NCP leaders.

Sources said that a section within the party is against extending support to the Shiv Sena which is ideologically opposite to it and the party fears suffering electoral losses in future if it is seen supporting an extreme right-wing outfit like Sena.

Insiders say the Congress is still mulling the pros and cons of support to the Sena as its party MLAs are keen to have a say in the government and do not want fresh election.

Earlier in the morning, all senior members of the Congress Working Committee met at Gandhi's residence.

However, the meeting was inconclusive and the party leadership decided to meet again at 4 pm, amid indications that the legislators were not in favour of fresh elections in the state. 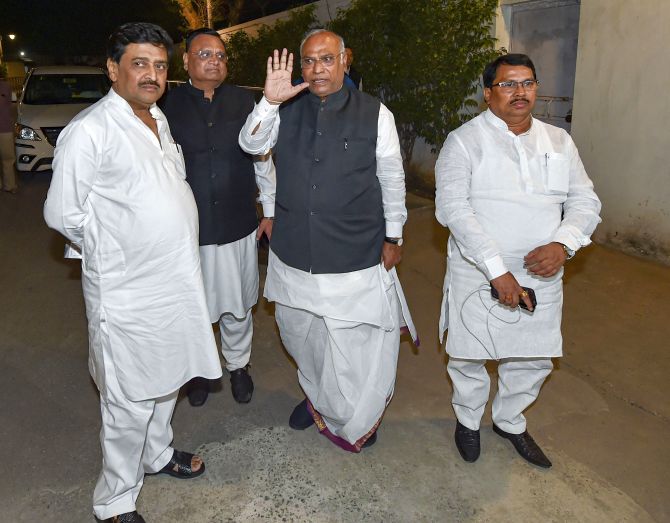 Former Maharashtra chief minister Prithviraj Chavan said no decision has been taken on whether to support Shiv Sena in Maharashtra.

He also denied that the party had taken any in-principle decision to support Sena, which Aditya Thackeray claimed.

"Neither ours nor NCP's letter has gone to the Maharashtra Governor yet. Two leaders will be sent for further discussions with Sharad Pawar. The next step will be taken after the discussions," said Manikrao Thackeray.

Earlier in the day, the lone Sena minister in Narendra Modi cabinet, Arvind Sawant, announced his resignation, a pre-condition set by the NCP.

Uddhav Thackeray met Pawar in Mumbai and requested him to support the saffron party in forming a non-BJP government.

On Sunday, the governor invited the Sena, the second largest bloc in the 288-member House with 56 newly-elected members, to stake a claim setting 7:30 pm deadline on Monday.

The governor's invitation came within hours after the BJP (105), which is the single largest party in the 288-member Assembly, declined to form a government after the Sena refused to join it.

The Sena then reached out to the Sharad Pawar-led NCP and the Congress, which collectively have 98 MLAs.