Chairman of the Press Council of India, Justice Markandey Katju, on Friday said that he was personally in favour of scrapping the sedition law. He also alleged that those who had slapped sedition charges had indulged in a serious offence and were liable to face criminal proceedings.

Aseem Trivedi was arrested by the Maharashta police and charged for sedition for his 'offensive' cartoons.

"If he had not been arrested nobody would have heard about him or his cartoons. The officers who got him arrested made him a hero. Cartooning is a part of democracy. Parliament should legislate and remove the sedition law altogether," said Katju.

Katju asked journalists to muster courage and get criminal cases registered against those who misuse the law. "If you do not have the guts then I will file criminal cases. In case trail courts refuse to register a case against offending officers you can approach the high court," the chairman of the press council of India said.

He took on West Bengal Chief Minister Mamata Banerjee for getting an ordinary citizen arrested just because he reminded her of her poll promises. Instead of him, Mamata Banerjee should have been arrested," he told reporters.

"If you do not have the courage, then follow me," he said when asked what was the way out. He lashed out at the electronic media for not agreeing to be control and instead propounding the theory of self regulation. Let them also join the press council. I am least bothered about their TRP," he said. 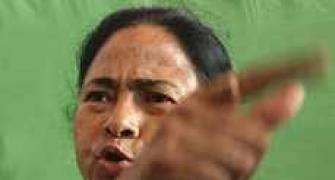 Allow states to collect tax taken away by Centre: Mamata
'Tomorrow, you will attack a filmmaker and a writer' 'Cartoonist Aseem Trivedi's arrest is a crime in itself'