The Jamaat-ud-Dawah on Tuesday beefed up security at the residence of its chief Hafiz Mohammad Saeed in the Pakistani city of Lahore after the US announced a 10-million dollar bounty for the man accused of masterminding the 2008 Mumbai attacks.

JuD leaders said they had not sought extra security from law enforcement agencies to protect Saeed and his brother-in-law Abdul Rehman Makki, for whom the US offered a two million dollar reward.

"We are relying on our own security. After the US move, we have attached extra volunteers with Hafiz sahib," a senior JuD leader told PTI at Saeed's residence.

A JuD spokesman claimed US bounty was "another attack by the US government on Muslims and Islam."

The JuD volunteers set up three barricades about 200 to 300 meters from Saeed's house.

The nine policemen were guarding these barricades while the JuD volunteers, equipped with sophisticated weapons, were on duty inside the building.

"After today's development, the JuD men asked us to be more vigilant," a police guard, who spoke on condition of anonymity, told PTI.

The JuD also maintains records of several families living in buildings adjacent to Saeed's home. Any person visiting these buildings has to undergo a body search by JuD volunteers before entering the barricaded street where Saeed's residence is located.

Saeed was not in his residence on Tuesday as he was away on a tour. He recently addressed a meeting at Faisalabad and was scheduled to visit Layyah, located about 300 km from Lahore. A Lahore Police spokesman said authorities had not received any request from Saeed for extra security.

"We have nothing to do with the US move to put a bounty on Saeed. Unless Saeed gives us a written request about a threat to his life in the wake of the US reward, we cannot provide him further security," he said.

In a related development, JuD spokesman Yahya Mujahid contended that the US had offered a 10-million dollar reward for Saeed due to his involvement in the Defa-e-Pakistan Council's efforts to oppose the reopening of NATO supply routes through Pakistan, American drone strikes in the tribal areas and trade with India.

"The head money is a strange move as the whole world knows where Hafiz sahib and Makki are living. They are not living in the forests, hills or caves," Mujahid told PTI.

"Hafiz Saeed and Makki are the most popular religious leaders of Pakistan and their relief and religious activities are not hidden from anyone," Mujahid said.

He claimed the US move was "politically motivated" and that the US government is "trying to please India".

Mujahid said the DPC was aware of "conspiracies being hatched by the US, India and their allies against Pakistan's sovereignty".

The US bounty for Saeed indicated "the negative tactics being adopted by them after the frustration of their ulterior motives and plans by the DPC," he said.

The JuD and DPC would defend Pakistan and play a pivotal role in the fight against foreign elements meddling in the country's affairs, Mujahid said.

Though Saeed was "not distressed by the US's negative tactics, their actions would further stoke anti-American sentiment in Pakistan" he claimed.

M Zulqernain in Lahore
Source: PTI© Copyright 2022 PTI. All rights reserved. Republication or redistribution of PTI content, including by framing or similar means, is expressly prohibited without the prior written consent.
Related News: Hafiz Mohammad Saeed, Unless Saeed, US, PTI, DPC
Print this article

IN PICS: Terror chiefs and the million-dollar bounties 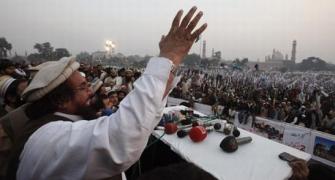