Responding with scepticism to Russia's approval of a COVID-19 vaccine, several scientists around the world, including in India, suggest it hasn't been tested properly given the time constraint and there may not be enough evidence to prove its efficacy. 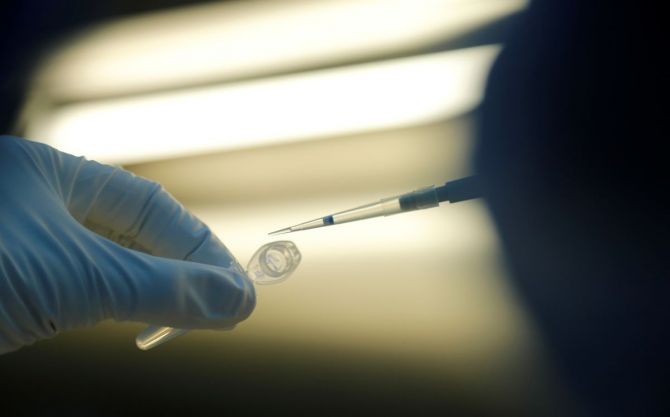 IMAGE: A scientist prepares samples during the research and development of a vaccine against the coronavirus disease at a laboratory in Saint Petersburg, Russia. Photograph: Anton Vaganov/Reuters

Announcing the "breakthrough" on Tuesday, Russian President Vladimir Putin vouched for the safety and efficacy of the vaccine, named Sputnik V, and said one of his daughters has already received a shot.

While the country hopes to start mass-producing the vaccine by October and plans to offer the first doses to essential workers, many in the science community seem unimpressed.

The announcement should be taken "with a pinch of salt", said Indian immunologist Vineeta Bal.

"Unless some data are out in the open for people to see, including clinical trial phases and numbers, it is hard to believe that vaccine efficacy studies are successfully conducted between June 2020 and August 2020," said Bal, an immunologist from the Indian Institute of Science, Education and Research in Pune.

"Are they talking about controlled human challenge studies? If yes, that evidence is also useful to examine protective efficacy," she noted.

Florian Krammer, a professor at the US-based Mount Sinai's Icahn School of Medicine, questioned the safety of the vaccine.

"Not sure what Russia is up to, but I certainly would not take a vaccine that hasn't been tested in phase 3. Nobody knows if it's safe or if it works. They are putting health care workers and their population at risk," Krammer said on Twitter.

Russian authorities seem to be depending on the generation of 'neutralising' antibodies in Phase 2 clinical trials for deciding that the vaccine candidate works, he said. A neutralising antibody defends a cell from an infectious particle by neutralising any effect it has biologically.

"While this is useful initial information, although even this is not really available in the public domain, it is not evidence of protective efficacy. So effectively they are bringing vaccine candidates into use without actual evidence of efficacy," said the immunologist from New Delhi's National Institute of Immunology.

Describing the vaccine announcement as worrisome, Rath said it may not provide protection and may interfere with subsequent vaccine responses while causing problems for the recipients.

Vaccine testing typically begins with lab and animal model studies before going on to different stages of human trials.

Phase 1 trials are small-scale, usually involving a few participants, to assess whether the vaccine is safe for humans.

Phase 2 trials often involve several hundred subjects, and mainly evaluate the efficacy of the vaccine against the disease.

The final, Phase 3, involves thousands of people to further assess the efficacy of the vaccine over a defined period of time, and can last several months.

"Efficacy is checked in Phase 2 but in a few hundred people or, in other words, in a small group. In Phase 3, this efficacy, safety etc, is checked in a larger group and monitored for infection possibilities. So, yes, finishing Phase 2 is possible but not Phase 3," Ray, a senior scientist at Kolkata's CSIR-Indian Institute of Chemical Biology, noted.

Even after the vaccine is ready, there are a lot of challenges, including whether the vaccine is effective in all populations, and if it can be used for different strains of the novel coronavirus, which might start mutating as time passes, added E Sreekumar, chief scientific officer at Thiruvananthapuram's Rajiv Gandhi Centre for Biotechnology.

A 2016 study, published in the journal JAMA Internal Medicine, that analysed 640 Phase 3 drug trials in the US found that 344, or over 50 per cent, failed.

Ray said Russian authorities might have Phase 1 and 2 results, but completing Phase 3 completion so fast will be hard to believe unless the data is publicly available.

"They started their trials in June. August is yet not even halfway through. How did they finish Phase 3? Maybe they just checked the efficacy i.e. Phase 2 and now starting Phase 3 simultaneously with the release of the vaccine," she said.

If that is the case, Ray said, people must be informed so that those who volunteer to get vaccinated know the facts.

"From Phase 1 to 3, the number of volunteers varies from tens to hundreds to thousands, hence, clearly Phase 3 remains a question mark for Russia's vaccine," said Ray.

According to the WHO, at least six other vaccine candidates -- made by Sinovac, Sinopharm, Pfizer and BioNTech, the University of Oxford with AstraZeneca, and Moderna -- have reached Phase 3 trials globally.

At least seven Indian pharma companies are working to develop a vaccine against coronavirus as they join global efforts to find a preventive to check the spread of the deadly virus.