The Supreme Court has asked the Centre to place before it a plan--in chart form--by Thursday morning as to how it will increase supply of medical oxygen to 700 MT daily for COVID patients here even as it stayed the contempt proceedings initiated by the Delhi high court against Central officials for non-compliance of its direction. "Putting officers in jail is not going to bring oxygen to the city, let us ensure lives are saved," said a bench of Justices D Y Chandrachud and M R Shah on Wednesday, terming the ongoing second wave of COVID-19 pandemic as an 'all-India' phenomenon.

It also said nobody can dispute that the central government is not doing anything to deal with the pandemic.

The apex court conducted an urgent hearing on the Centre's plea against the High Court show-cause notice on contempt and an order seeking personal appearance of its two senior officials for failing to comply with the directions to ensure supply of 700 metric tonnes(MT) of liquid medical oxygen(LMO) to Delhi.

On Tuesday, Delhi got 555 MT of the life-saving gas.

The court said it will have to find ways to ensure oxygen supply to the national capital as 'we are answerable to people of Delhi'.

"We are also in Delhi. We are helpless and have been on the phone. We can imagine what citizens are going through," Justice Chandrachud said, adding that his office is hearing cries from people including lawyers seeking help.

The Delhi high court, meanwhile, asked the Centre and the Delhi government to work together to create the oxygen buffer and streamline the distribution process, and said help of the armed forces can be sought 'as there is grave urgency'.

The court said it appeared that the Delhi government has not taken steps for creation of a buffer of LMO and for streamlining its distribution in the national capital.

A bench of Justices Vipin Sanghi and Rekha Palli also said it is for the Government of National Capital Territory of Delhi (GNCTD) to explore the various possibilities to create storage facilities for LMO and oxygen cylinders in the city.

It said the obligation to create an oxygen buffer fell on both the Centre and GNCTD as per the Supreme Court's April 30 order.

It asked Additional Solicitor General (ASG) Chetan Sharma to seek instructions with regard to seeking aid from the armed forces for 'setting up on a war footing storage tanks for LMO'.

An official from the Ministry of Defence, who later joined the proceedings, said she 'sees no difficulty in enabling the Delhi government' to set up the tanks.

While granting the stay on contempt against the Central officials, the Supreme Court court made clear that it was not stopping the high court from monitoring COVID-19 management related issues.

It directed a meeting, even virtually, between officials of the Centre and Delhi government by this evening to discuss various aspects of augmenting the oxygen supply to the national capital.

The court also lauded the efforts of Maharashtra authorities in ensuring oxygen supply to COVID patients in Mumbai and asked the Centre and the Delhi government to talk with the civic body officials of that city to learn about augmenting and managing the supply.

"Ultimately putting officers in jail and hauling them up for contempt will not help. There should be a spirit of cooperation and the lives of people are at stake... Nobody can dispute that this is a national pandemic, that people are dying, that the central government is not doing anything..." it said.

During the over two-hour-long hearing via video conferencing, the top court also asked the Centre, represented by Solicitor General Tushar Mehta and Additional Solicitor General Aishwarya Bhati, to place before it a plan - in chart form - indicating the manner in which it would comply with the order asking it to supply 700 MT LMO to Delhi.

Seeking the report by Thursday 10.30 am, the bench said it should also indicate the sources of supply of LMO, provision for transportation and 'logistical arrangements necessary'.

The top court seemed to be in disagreement with a report on oxygen demands of states prepared by an expert committee, to which AIIMS Director Randeep Guleria is also a member, which said Delhi needed 515 MT of LMO.

It said that the committee had taken note of oxygen demands linked to ICU and oxygen beds of hospitals only and did not consider the aspect such as individuals, who are not hospitalised, also need oxygen.

"The pandemic in Delhi is very critical. Our order was of May 2. We are on May 5. What you need to do is tell us how much you have allocated over the past few days," the bench said.

"This needs to be evaluated on a real-time basis. There is tremendous pressure on citizens to get cylinders and oxygen. If you can showcase the time of arrival, the amount of oxygen, please put it upfront and publicise. So that citizens know," the bench observed.

The central government officials, Piyush Goyal and Sumita Dawra, who were summoned by the high court, were comforted by the top court before being asked questions on roadblocks in supply of 700 MT LMO to Delhi.

"First and foremost, have a peace of mind. I know you are all working beyond the call of duty and the aim is not to haul up the officers for contempt and contempt doesn't help, until or unless it is absolutely willful," the bench said.

Goyal, additional secretary in the Ministry of Home Affairs, then explained the situation and answered queries and said shortage of containers is the key problem and 'production of oxygen is not a problem'.

The top court said it cannot review its order of April 30 and the Centre will have to inch towards supply of 700 MT of oxygen daily for Delhi and asked the Union government to place before it a plan by Thursday morning as to how it will revamp the supply to 700MT.

It suggested that a committee of experts and doctors including those from the private sector may be constituted to ascertain the situation in Delhi and take into account the COVID-19 situation which had been prevailing in Mumbai.

"This is not adversarial litigation. Centre, Delhi governments are elected and doing their best to serve COVID-19 patients," Solicitor General Tushar Mehta said.

"Tell us how much oxygen you have allocated to Delhi in the last three days," the bench asked at the outset. 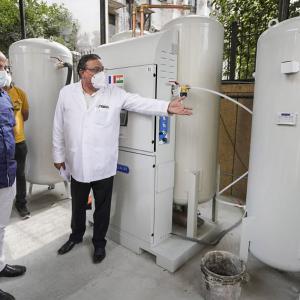 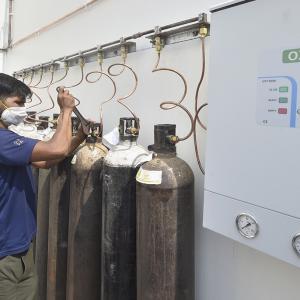