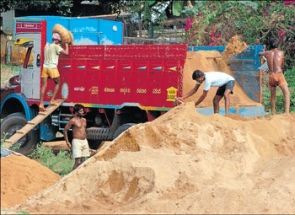 IAS officer Durga Sakthi Nagpal's suspension issue came up on Thursday in the Supreme Court which agreed to hear a PIL seeking quashing of all proceedings against her on Monday even as IPS officers joined their IAS colleagues in batting for her.

The court fixed the date after the petitioner pleaded for an urgent hearing alleging that Nagpal is suffering hardship for following Supreme Court's order on preventing unauthorised construction of religious buildings on public land and the apex court should protect her.

The petitioner, who contended that the action taken against Nagpal, a 2010-batch officer, was arbitrary, unconstitutional and malafide, also made the UP government and the Centre as respondents.

Nagpal, SDM, Sadar, Gautam Budh Nagar, was suspended for ostensibly ordering the demolition of the wall of an under-construction mosque.

Opposition parties and others alleged that she was targeted for clamping down on the powerful sand mafia in the state.

Close on the heels of the IAS Officers' Association strongly backing Nagpal, the nodal body of IPS officers on Thursday wrote a two-page letter to UP Chief Minister Akhilesh Yadav, terming the action against her as "arbitrary" and "autocratic".

The all-India association, with more than 4,000 IPS officers as its members, has requested the state government to "immediately reinstate her".

Akhilesh, in an interview to the Wall Street Journal, defended the suspension and said she was very much present when the wall was demolished.

He also regretted having posted her in Greater Noida following a request made to him by her husband, a 2011-batch IAS officer. "Now, I am wondering if I made a mistake by taking that decision," he said.

The PIL sought quashing of all proceedings against Nagpal who had moved against the mining mafia in Gautam Budh Nagar area.

Nagpal was suspended on July 27 ostensibly for ordering the demolition of the wall without following the due process.

The petition sought judicial review of the suspension order and said, "Nagpal's victimisation is a new low in a long process of the subversion of bureaucracy".

The UP government had on August 4 served a charge sheet on the officer, asking her to submit an explanation for her conduct.

Coming out in support of Nagpal, Congress President and the Chairperson of National Advisory Council Sonia Gandhi has written a letter to the prime minister, saying that she should not be "unfairly treated".

The prime minister had on August 5 said the Centre was in touch with the state authorities on the issue and laid down rules will be followed.

The IPS officers body said the background of the events leading to her suspension and what is being reported in the print and electronic media made very distressing reading.

"The apparent allegations of her having demolished a wall belonging to a religious community have been shown as false and baseless in the report of the district magistrate of the same district.”

"It has been reliably learnt from various sources that there was no communal tension or the possibility of law and order situation breaking out which led to the suspension of Ms Durga Shakti Nagpal," association secretary Pankaj Kumar Singh said in the letter.

In Bareilly, UP minister Azam Khan accused the media of "glorifying" the officer as "Durgaji".

"The media has projected Durga as Durgaji. Otherwise in such cases, officers from the level of managing director to chief engineer get suspended and not even a single line is published," Azam told reporters.

The minister said the issue of Nagpal's suspension has been blown out of proportion by the television news media and added that there would have been no dispute if the district magistrate had also been suspended.