The Supreme Court on Wednesday permitted reservation for the Other Backward Classes (OBCs) in the local body elections in Madhya Pradesh.

The apex court, which had passed an order on May 10 and noted that no reservation for OBCs can be provisioned until the triple test formality is completed 'in all respects' by the state government, permitted the state to notify the reservation pattern local body wise as delineated in the reports of the dedicated commission.

A bench headed by Justice A M Khanwilkar passed the order on an application filed by the state seeking modification of the May 10 order and permitting the conduct of elections based on recently notified delimitation.

In the application, the state government had also urged the court to permit it to notify reservation for OBCs based on the recommendation of the OBC Commission in the second report of May 12 and for the Scheduled Castes/Scheduled Tribes within four weeks.

"We also permit the state of Madhya Pradesh to notify the reservation pattern local body-wise as delineated in the reports of the dedicated commission, to be adhered to by the State Election Commission. That be done within one week from today. The State Election Commission shall issue election programme in respect of concerned local bodies thereafter within one week," the bench, also comprising Justices A S Oka and C T Ravikumar, said in its order.

'For the time being, we permit the Madhya Pradesh State Election Commission to notify the election programme for the respective local bodies keeping in mind the delimitation notifications already issued by the state government as on this date, i.e., till today; and also the reports submitted by the dedicated Commission, referred to above,' it said.

The bench said that the directions given in the May 10 order stand modified to the above extent.

'We reiterate that steps taken by all concerned will be subject to the outcome of this petition as already noted in the earlier order. This application is disposed of accordingly,' it said.

The top court noted in its order that the application is for modification of direction given in the May 10 interim order on the assertion that certain crucial facts including the subsequent events before the date of the stated order were not brought to the notice of the court.

The bench said it was urged that delimitation exercise in the state had already been completed and so notified before May 10.

It noted that report of the dedicated commission had been revised in light of the observations made by the court.

'The second (revised) report came to be submitted by the commission incorporating all the requisite issues, also giving the break-up of reservation for OBC category to be provided local body wise. This report has been submitted to the state government on May 12,' the bench noted.

It said according to the applicant, it is a comprehensive report reckoning all the factors as required to be adhered to for complying with the triple test predicated in the earlier decision of the apex court.

'To reassure ourselves, we have gone through the reports submitted by the dedicated Commission concerning the determination of the proportion of reservation to be provided for OBCs local body-wise across the state of Madhya Pradesh,' the bench said.

'The second report has focused on the proportion of local body-wise reservation, to be provisioned for OBCs while keeping in mind the maximum reservation limit of 50 per cent as enunciated by this court,' it said.

The bench further said, 'We may not be understood to have expressed a final opinion either way on the validity and correctness of stated reports.'

It said the State Election Commission (SEC) shall ensure that an election programme is issued in respect of local bodies where elections are overdue without any loss of timekeeping in mind the feasibility of conducting elections owing to impending monsoon.

'Despite issuing such election programme, it would be open to the Madhya Pradesh State Election Commission to modulate the schedule if and when the occasion arises,' it said.

In its May 10 order, the apex court had directed the MP SEC to issue a poll programme for local bodies within two weeks, saying more than 23,263 such bodies are functioning without elected representatives for last over two years and this is bordering on a 'break down of rule of law'.

The state, in its application seeking modification of the order, said the Commission had submitted its second report to the state government in respect of the percentage of reservation local body wise.

A separate application was also filed in the court seeking modification of the May 10 order.

The applicant, for whom advocate Shashank Ratnoo appeared in the court, sought modification to the extent that OBC reservations be allowed in local body polls.

In its May 10 order, the apex court had noted that if the triple test exercise cannot be completed before the issue of the election programme, the seats, except reserved for Scheduled Castes and the Scheduled Tribes which is a constitutional requirement, must be notified as for general category.

It had earlier referred to the Constitution bench verdict of 2010 which had mentioned the triple condition, including setting up a dedicated commission to conduct a contemporaneous rigorous empirical inquiry into the nature and implications of the backwardness qua local bodies within the state, which is required to be followed before provisioning such reservation for OBC category.

A three-judge bench had later reiterated the same. 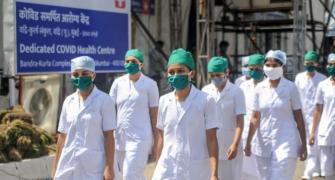