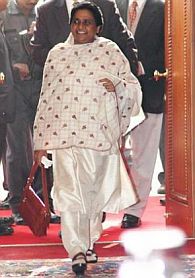 The Supreme Court on Thursday refused to reopen a CBI probe in a nine-year-old disproportionate assets case against Bahujan Samaj Party chief Mayawati.

The apex court, while pronouncing its verdict, refused to entertain a plea seeking review of its previous order quashing disproportionate assets case against Mayawati.

A bench of justices P Sathasivam and Dipak Misra, which had clarified that CBI is free to probe the BSP chief during an earlier hearing on the case, passed the order clarifying its own judgement.

The apex court bench said that its order on Mayawati was only in connection with the Taj Corridor case and the court did not go into other aspects.

The bench had said on May 1 that the FIR in the DA case was quashed because the agency proceeded against her without properly understanding its orders which were confined to the Taj Corridor case.

The court also said that judgement had not taken away CBI's power to proceed against her in a separate Disproportionate Assets case.

According to reports, the review petition was filed by Kamlesh Verma who was an intervener in the case filed by Mayawati in the apex court for quashing the DA case against her.

Senior advocate Shanti Bhushan , appearing for Kamlesh Verma, had pleaded with the court to pass order on review to bring accused to the book.

Earlier, the Supreme Court had on July 6 quashed the nine-year-long disproportionate assets case against her and had pulled up the CBI for exceeding its jurisdiction by lodging an FIR against her without any direction from it.