News
Business
Movies
Sports
Cricket
Get Ahead
Money Tips
Shopping
Sign in  |  Create a Rediffmail account
Rediff.com  » News » Kishenji, the Maoist who waged a bloody war against the state

Kishenji, the Maoist who waged a bloody war against the state 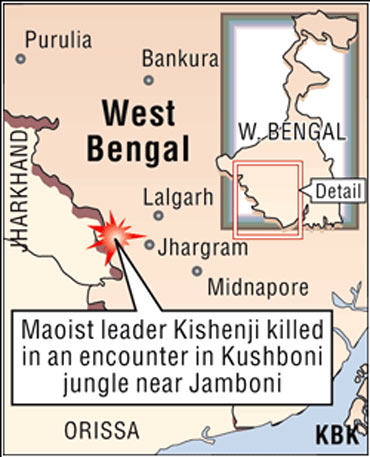 A shrewd fighter and a marksman, top Maoist leader Kishenji spent three decades of his life in hiding, waging a relentless, bloody war against the state to emerge as the biggest security headache for the West Bengal government and the Centre. However, the reported death of Kishenji has not created any ripples in his hometown of Karimnagar in Andhra Pradesh.

Born Mallojula Koteswara Rao in an Andhra village, the media-friendly 58-year-old cotton-clad savvy commander was the face of the Maoist movement in India.

Kishenji's image in public is of a man with his face covered showing only his back with a striped scarf around his head and an AK-47 assault rifle slung across his shoulder.

There had been a lot of talk that Kishenji was sympathetic towards the Telangana movement. Reports from the Intelligence Bureau suggested that naxalites were trying to be part of the movement.

However, people of Telangana have kept their distance from the man. It was alright for them as long as Kishenji was raising his voice for the farmers. However, people decided to stay away from him once he decided to give preference to the bullet over the ballot.

The people of his district today say that it was because of the naxal movement that they were able to raise their voice against the zamindar system. Kishenji's influence on the social change is something that drove the Telangana movement in the first place.

However, over the years people began to dislike Kishenji's way of functioning as he took up arms. In the bargain, people started bearing the brunt of the police force. This brought about anger among the people, as a result of which they were not ready to even provide shelter to the naxals.

Gaddar, a well-known Telangana leader, who has been associated with the Telangana movement, said that Kishenji's death was a loss. However, there have been reports of a rift as Gaddar chose a political party to fight the Telangana battle, which was not acceptable to the naxals.

Kishenji has been under immense pressure since the start of 'Operation Greenhunt' in 2009 and like counterinsurgency operations throughout the Maoist stronghold in the 'Red Corridor' that are underway at present.

Active in Lalgarh area of West Bengal, he has regularly vacillated about the concept of peace talks on the national level with the Centre all the while issuing statements that he refuses to lay down arms as a pre-condition of arriving at the negotiating table.

A politburo member of the banned Communist Party of India (Maoist) and the group's military leader, he had claimed responsibility for the Silda camp attack in West Bengal in 2010. Twenty-four paramilitary personnel of Eastern Frontier Rifles (EFR) were killed in the massacre

"This is our 'Operation Peace Hunt'. It is our retaliation against the 'Operation Green Hunt' of the government," an unrepentant Kishenji told local television stations in Kolkata after the attack. Union Home Minister P Chidambaram and Chief Minister Mamata Banerjee have dubbed Maoists worse and deadlier than terrorists.

The second in-command of the outfit and in-charge of military operations in junglemahal since 2009, Kishenji has given regular interviews to the media from an unknown location. He has previously used Prahlad, Murali, Ramji, Jayant and Sridhar as aliases.

Born in the Karimnagar district of Andhra Pradesh, Kishenji helped found the People's War Group (PWG) in 1980 and oversaw the group's merger with the Maoist Communist Centre of India to form the CPI (Maoist).

In one of the media interviews, Kishneji claimed he does not "kill easily" but the violence he has unleashed betrays his claim. Once, he had described himself as a "soft-hearted person, willing to forgive".

The rebel went underground a year after the Emergency in 1975 and came in contact with CPIM (L) leaders. In 1980, he co-founded People's War in Andhra Pradesh, rose to being politburo member and was put in charge of organising movements in the Telangana region and Dandakaranya in AP.

In the early 1990s, he moved into Bihar, then a Maoist Communist Centre of India (MCCI) stronghold.

Kishenji set about orchestrating a merger of the two radical forces. In spite of strong differences, he succeeded in unifying PW and MCC in 2004. This brought him to the tribal belt of West Bengal, where he soon showed his aggressiveness and hunger for power.

He has been accused of sidelining Maoist leaders in West Bengal and expelled several senior leaders who fell out with him. Now, he is the undisputed number 2 in the eastern region behind Ganpati.

Reports of Kishenji being missing from the front after a recent injury had led to speculation about his future in the Maoist movement but judging by his audacious, repeated public statements he displayed no intention of abating armed struggle at any time in the near future.

Kishenji often described his father in interviews as a "freedom fighter". The estimated 22,000 insurgents believed to be under Kishenji's command have traditionally used hit-and run attacks and ambushes on security forces comprised of small arms fire, laying anti-personnel and anti-vehicular mines.

In the last several years, they have become quite adept at using Improvised Explosive Devices (IED) to inflict mass casualties on their opponents who often travel and congregate in large groups.

With inputs from Vicky Nanjappa 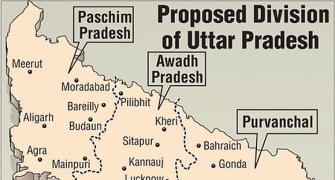 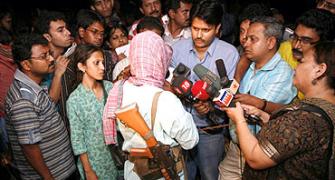 The slain Maoist is Kishenji, 99 per cent: Centre