A sessions court in Mumbai is all set to deliver its verdict on Wednesday in the hit-and-run case involving Bollywood actor Salman Khan, who is charged with killing one person and injuring four by ramming his Sports Utility Vehicle into a bakery shop in suburban Bandra 13 years ago. 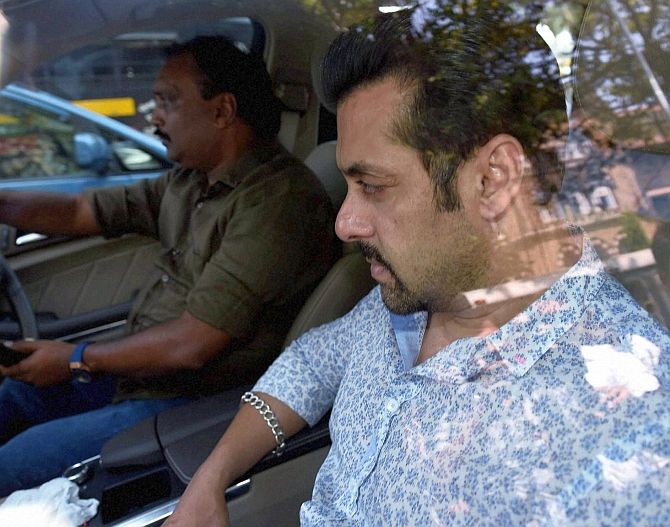 Police have geared up to provide tight security in the court to restrain the actor's fans from entering the premises with a view to avoiding overcrowding, sessions court sources said.

Only media persons, lawyers and the court staff would be allowed inside the court, the sources said.

Judge D W Deshpande had declared last month that he would pronounce the verdict on May 6.

He also summoned the actor to remain present in the court at 11.15 am on the day.

The prosecution and defence concluded arguments on April 21 in the trial which was conducted afresh after a Magistrate added the charge of culpable homicide not amounting to murder and referred the case to the sessions court.

The culpable homicide offence, which provides for punishment up to 10 years, is fit for trial by a sessions court and not by a magistrate.

Earlier, the magistrate was trying Khan for rash and negligent driving, an offence under IPC which attracts punishment up to two years.

Khan, 49, pleaded he was not driving the car at the time of mishap and that his driver Ashok Singh was behind the wheel. This has been corroborated by Singh who appeared as defence witness.

However, prosecution led by Pradeep Gharat alleged that Khan was driving after consuming 'Bacardi Rum' in a bar. The actor, on the other hand, argued he was having a glass of water and not alcohol.

While prosecution pleaded that there were three persons in the car -- Salman, his police bodyguard Ravindra Patil and singer friend Kamal Khan, the actor argued that there was a fourth person and he was Ashok Singh.

A court had in 2013 framed charges in a fresh trial against Khan for culpable homicide not amounting to murder.

The prosecution examined 27 witnesses to prove its case.

Khan's lawyer Srikant Shivade argued that post-mortem report of the deceased suggested that he had received crushing injuries and it had been caused when a crane called by police could not lift the heavy SUV in one go and dropped it on the victims.

The defence lawyer argued that the mishap had occurred as the car crashed into a shop after its left tyre had burst. He also alleged that road was being repaired near the shop where the mishap occurred and stones were scattered at that place.

The prosecution said it was relying upon the statement given by Khan's police bodyguard Ravindra Patil to police saying he had warned the actor not to drive in a rash and negligent manner but he did not heed to his advise.

Patil, who passed away during the trial, had also said that Khan was under the influence of liquor when he met with the accident. However, he has not said a word about Khan's claim that his driver Ashok Singh was behind the wheel.

Khan's lawyer argued that the evidence of Ravindra Patil, an eyewitness, should be discarded as he had passed away and was not available for cross examination.

On the other hand, the prosecution argued his evidence should be considered as he had seen Khan driving the car and was a key witness.

The defence lawyer also argued that police had not obtained finger prints from the steering wheel to find out who was driving the car.

However, Khan claimed that he was not driving the Toyota Land Cruiser and it was his driver Ashok Singh who was behind the wheel.

He said "Ravindra Patil was a liar and was sleeping in the car at the time of mishap."

The defence lawyer also disputed the prosecution's claim that it took 30 minutes for Khan to drive his car from J W Marriot Hotel to the accident spot at a speed of 90 km per hour after taking drinks on September 28, 2002.

The lawyer argued that it would not take him 30 minutes because the distance between the two destinations is not much.

It would take Khan only ten minutes, he said, adding that the prosecution's case was "false".

The prosecution also alleged that Khan was driving the car without holding a licence. It produced RTO records to show that the actor had procured a licence only in 2004, two years after the mishap.

The actor, however, pleaded that this was not the first licence obtained by him.

The court would also pass the order on Wednesday on an application filed by activist Santosh Daundkar alleging that police had committed perjury (giving false evidence) by examining a wrong set of doctors and delaying the trial by three years.

The application alleged that police had not examined a key witness -- Kamaal Khan, singer and friend of Khan -- who was in the car along with the actor at the relevant time.

He is charged under IPC sections 304 part II (culpable homicide not amounting to murder) which attracts upto 10 years in prison; 279 (rash and negligent driving) which stipulates six months jail; 337 & 338 (causing hurt by act endangering life and causing grievous hurt respectively) with punishment up to two years, and 427 (mischief causing damage to property) with maximum punishment of upto two years.

Under Motor Vehicle Act, the actor is charged with Sections 34 (a), (b) read with 181 (driving vehicle in contravention of rules) and 185 (driving at great speed after consuming alcohol).

Khan is also charged under sections of Bombay Prohibition Act relating to driving under influence of alcohol with maximum six months' jail.