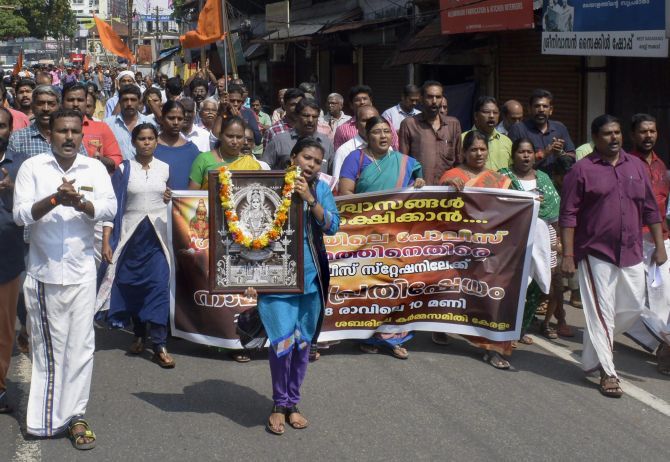 Prime Minister Narendra Modi on Sunday lashed out at the Communist Party of India (Marxist)-led government in Kerala and said the Sabarimala issue had shown to the people of the country how the communist government was trying to disrespect the culture of the state.

He said the opposition parties could abuse him as much as they wanted but should not mislead farmers.

The prime minister said the opposition should not create hurdles in opportunities for the youth.

"Sabarimala got the attention of the entire nation. The people of India are seeing the manner in which the communist government of Kerala are disrespecting all aspects of Kerala's culture The UDF (United Democratic Front) too is just like the Communists.

"Why is the government undermining the culture of the state? Unfortunately, the cultural ethos of Kerala is under attack. It's been done by a party which is governing the state," Modi told a huge gathering at a Yuva Morcha meet in Thrissur.

Modi said his government had made efforts to make all kitchens in the country smoke free.

"When we came to power, we made efforts to make all kitchens smoke free. At that time, only 55 per cent of houses had gas connections. But today we have achieved 90 per cent," he said.

The prime minister also termed as the 'biggest joke,' the Congress and Left parties talking about democracy.

Modi slammed the Congress and the Left parties, saying they had no respect for institutions, including the Election Commission.

He said the mindset of the Emergency still lived in the minds of many Congress leaders.

"Congress and communists talking about democracy is the biggest joke. What is happening in some parts of Kerala.. political workers are killed just because their ideology is different from the communists," he said.

The prime minister this culture has now spread to Madhya Pradesh, where BJP workers were being attacked.

He said the Congress was even questioning the Election Commission.

"Be it Congress or communists, they have zero regard for any institution. For them every institution, the armed forces, police, CBI, the CAG, everybody is wrong, but they are right."

He also referred to the recent hacker's press meet in London over the alleged hacking of EVMs in the 2014 Lok Sabha elections.

"And who was participating in the press conference? A top-most Congress leader. Is this your respect to our institutions and our democracy? 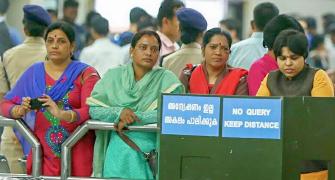