At least 100 pilgrims returning from Sabarimala Ayyappa temple were killed and about 100 injured late Friday night when a jeep ploughed through the devotees in a narrow forest stretch at Pullumedu in Idukki district of Kerala, triggering a stampede.

"55 bodies have so far been recovered from the site," which is a remote area on the border with Tamil Nadu, Kerala Education Minister M A Baby said.

Baby said most of the people died in the stampede which broke out after the accident at 8.15 pm.

"We are not in a position to specify at this stage how many were killed by the jeep and how many perished in the stampede", he added.

Baby said most of the pilgrims involved in the tragedy were from Tamil Nadu and other states who were returning to their homes to celebrate Pongal after having a darshan of the deity at the hill shrine.

There were also a few Malayalees among the dead, he said, adding that Chief Minister V S Achuthanandan had directed the Idukki district administration to provide speedy relief to the injured.

Sabarimala Special Commissioner Rajendra Nair said a jeep had ploughed through the pilgrims, who were returning from 'makara samkrama pooja', using a narrow trekking path in a heavily forested hilly area, about 7km from Sabarimala hilltop shrine.

Nearly 1.5 lakh pilgrims were estimated to have left by the forested route for home.

The hilly terrains and forests at the accident site hampered rescue operations.

Thousands of devotees had turned up for worship at the hill shrine during the 'makara samkrama pooja' on Friday evening, marking the finale of two-month pilgrimage to the famous Lord Ayyappa temple.

They were returning after 'makara jyoti', held as a divine light by the devotees, which flickered across the eastern horizon above the Ponnambalamedu after the pooja.

Ten years ago, a stampede at Pampa on way to the hill shrine killed 50 people on the occasion of Makar Jyoti.

Defence Minister A K Antony has offered Kerala government all the help from defence forces for rescue operations.

A special team of the National Disaster Response Force has left for the spot. 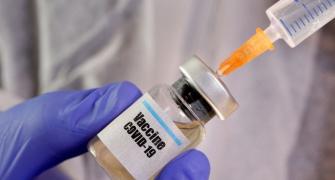