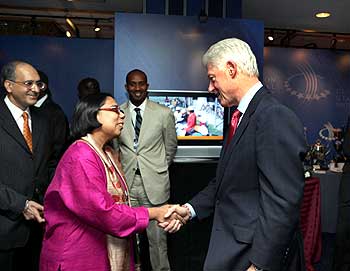 In a glittering ceremony, former United States president Bill Clinton Thursday evening presented six individuals, including New Delhi-based Ruchira Gupta -- journalist, activist and policymaker, who for the past 25 years has worked relentlessly for women's and girl's rights, especially the ending of their sex trafficking -- with the 2009 Clinton Global Citizen Awards.

Gupta is best known for her work with Apne Aap Women Worldwide, a grassroots organisation she founded in 2002 along with 22 women who were featured in her sex-trafficking documentary, 'The Selling of Innocents,' which won an Emmy Award in 1997.

Apne Aap ('self-help' in Hindi) combats trafficking by building up the capacity of girls and women through small 'self-help' social and economic cooperatives. Through these cooperatives, the organization has provided access to education, income generation, training and legal protection. Apne Aap now protects women and girls through 67 such cooperatives and has a goal to reach 200 cooperatives, with 3,000 girls and women participating, in one year's time.

The ceremony took place during the Fifth annual meeting of the Clinton Global Initiative, which convenes leaders from across sectors of society, giving them a forum for develop and then implement workable solutions to some of the world's most pressing challenges.

Clinton in his welcoming remarks, said, "Our honorees see hope where others see despair. The come from different countries and play different roles in society. But all six have fostered positive partnerships and relationships and used them to change the world."

"We owe them for their commitments, which embody the spirit of CGI," he said.

Earlier, in his letter to Gupta, informing her of the award, Clinton wrote that he would be "pleased to pay tribute to your leadership in civil society and your extraordinary role in our common mission to address global challenges."

He said, "Your relentless effort to end human trafficking and gender-based violence in outstanding, and I can't think of anyone more deserving of this award."

Clinton said the "Clinton Global Citizens Awards have been a remarkable highlight of our annual meetings, and it offers us a terrific opportunity to celebrate outstanding leaders like you."

"Your remarkable efforts have inspired so many people around the world," he added.

Award winners were nominated by a collection of global leaders and "selected for their visionary leadership, demonstrated impact, and sustainable and scalable work in solving pressing global challenges," the Clinton Foundation--of which CGI is a particular project-said.

Actor Ben Stiller was the emcee, which included musical performances by Alicia Keys, co-founder of Keep A Child Alive and Juanes, founder of the Mi Sangre Foundation.

The presenters were General Wesley Clark, former NATO Commander, Lisa Ling, correspondent on the Oprah Winfrey Show and ABC's Nightline, Usher Raymond IV, founder and chairman of Usher's New Look, and actress Demi Moore, co-founder of the Demi and Ashton Foundation. Moore presented Gupta and said, "Courageous, resilient, persistent Gupta was working as a journalist in 1994, when she traveled to Nepal and realized that many of the villages she passed through had no women between the ages of 15 and 45."

"The missing women and girls had been sold into sexual slavery, often by their parents and often when they were as young as eight or nine years old," she said.

Moore spoke of how "Gupta spent the next 18 months working on a documentary about the global sex trade. She found that girls were beaten and raped repeatedly until they stopped fighting back. When they were old enough to have children themselves, their babies were taken from them -- the boys, to be raised as servants and pimps, and the girls to join their mothers in the sex trade."

She spoke of how while Gupta was producing the film, her car was stoned and she was threatened by a man with a knife, "but the women she met wanted to tell their stories. Gupta persevered, and her documentary, The Selling of Innocents, won an Emmy in 1997".

Moore said that after this assignment, "Gupta could not return to life as an impartial observer. With 22 women who had helped her with the documentary, she founded Apne Aap Women Worldwide," to alleviate the lot of these women and girls.

"She also began to actively campaign for laws to protect girls and women from the traffickers and to punish the perpetrators," she added, and said Gupta's "testimony to the US Senate (in 2000) helped in the passage of the US Trafficking Prevention Act in 2000."

Besides helping countries like Thailand, Cambodia, Laos, Vietnam, and Kosovo, "develop plans of action against trafficking," Moore said Gupta was "currently campaigning to change her own country's laws to dismantle the prostitution and trafficking system." 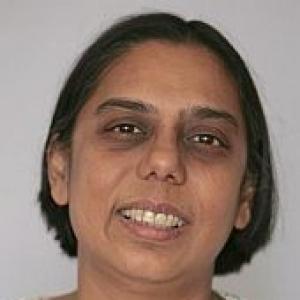