RLD launch in Telangana being watched with great interest

Many in the Telangana region have shown some interest in the RLD and depending on how honest they are to the cause they would think of supporting them, says Vicky Nanjappa.

An interesting development in Telangana is taking place with the launch of the Rashtriya Lok Dal on Sunday. The party, headed by Ajit Singh, will launch the Telangana wing of the RLD. Terming it as a sub regional party, the RLD will focus only on the Telangana region and will not make its entry into the rest of Andhra Pradesh.

The RLD is an known party in south India, but the decision to launch a sub regional party only in Telangana is being watched with a great deal of interest. Singh had from the beginning spoken in favour of smaller states and he had also in the past supported the cause of Telangana. For many in the Telangana region it is being seen as a ploy to form an alternative to the Telangana Rastriya Samithi. Many in the region have been complaining about the Telangana Rashtra Samithi and have often accused it of deliberately delaying the formation of the state as it fears it would lose an agenda for the elections.

Many in the Telangana region have shown some interest in the RLD and depending on how honest they are to the cause they would think of supporting them. The RLD which is going to start building its base will also prepare for the 2014 elections.

During Singh's meeting with the Telangana JAC, he was assured that the party would get support provided they worked honestly for the cause. The JAC members however made it clear that they do not have any particular inclination towards any party but would support anyone who worked for the cause.

The RLD on the other hand is expecting members from the TRS and also some in the Congress to join them. The logic of the RLD is that the TRS and the Bharatiya Janata Party would be avoided by many people. TRS has been accused of delaying the cause and joining hands with the BJP in the region would mean putting to risk the chance of a win in at least 30 seats which are dominated by Muslims in the Telangana region.

It does realise that the TRS could be a big opponent and hence the launch of the RLD would only help the Congress split the TRS.

The TRS on the other hand appears to be a worried bunch. It does sense a larger game by the Congress on the issue. K Chandrasekara Rao who was missing during the recent Telangana march is now in Hyderabad and meeting with all persons involved in the Telangana movement. He met with the employees association of Telangana and would be meeting the student's union as well. During his meeting with the employees he had said that they could expect the formation of Telangana by the October 24. He said he has positive information regarding the same. However, sources say that by the 24th there will not be a decision on the formation of the state, but only a process to lay down a road map would commence. Rao also told the employees association that he had heard from his sources that Sonia Gandhi had directed Ghulam Nabi Azad to keep the leaders from the Seema Andhra regions under control. He said that this was done to ensure that no ruckus was caused once Telangana was formed on the October 24.

However, leaders in the JAC feel that this is misinformation being parted by KCR. He does realise that the Congress is trying to take the credit away from him. Earlier, he had delayed the formation and today he wants it immediately since he could use that issue to fight the elections. Moreover, by conveying this message, he wants to keep his flock together by giving the impression the Telangana issue has been sorted out and there is no need to seek the support of the RLD for the same. 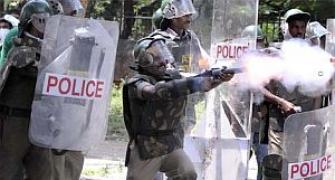