Images of the events that shaped the world in March. 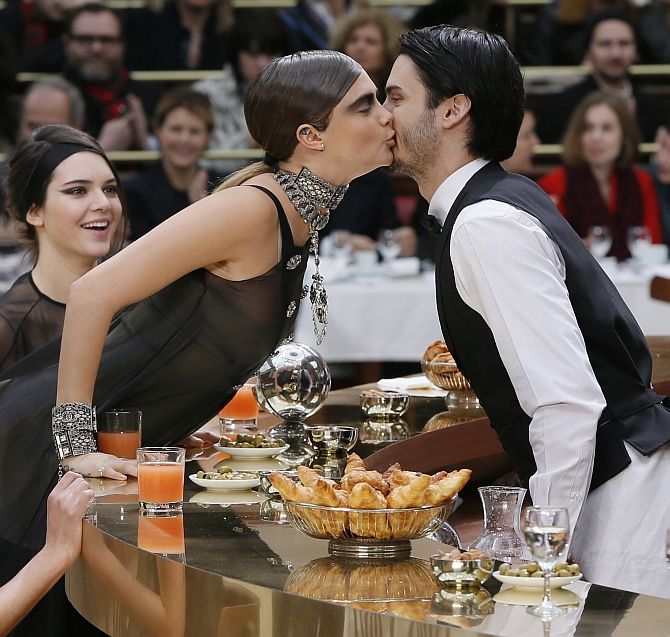 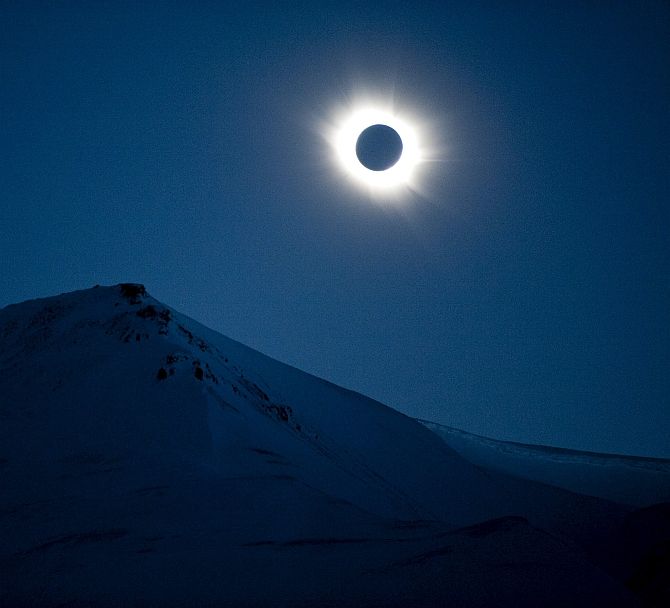 Image: A total solar eclipse is seen in Longyearbyen on Svalbard March 20, 2015. A partial eclipse was visible on Friday, the first day of northern spring, across parts of Africa, Europe and Asia. The total eclipse of the sun was only visible in the Faroe Islands and the Norwegian archipelago of Svalbard in the Arctic Ocean. Photograph: Jon Olav Nesvold/NTB scanpix/Reuters 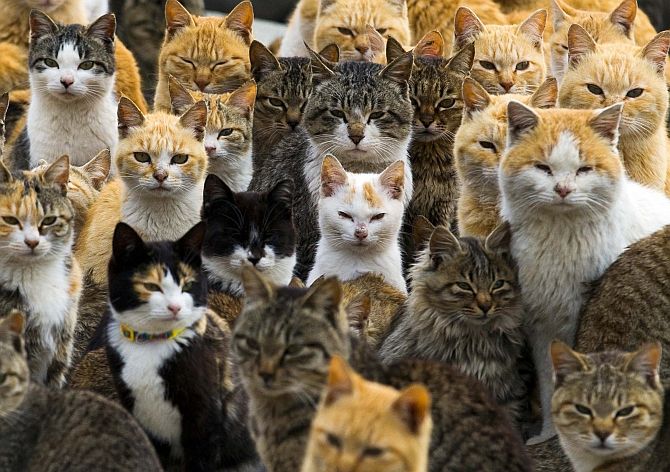 Image: Cats crowd the harbour on Aoshima Island in the Ehime prefecture in southern Japan February 25, 2015. An army of cats rules the remote island in southern Japan, curling up in abandoned houses or strutting about in a fishing village that is overrun with felines outnumbering humans six to one. Photograph: Thomas Peter 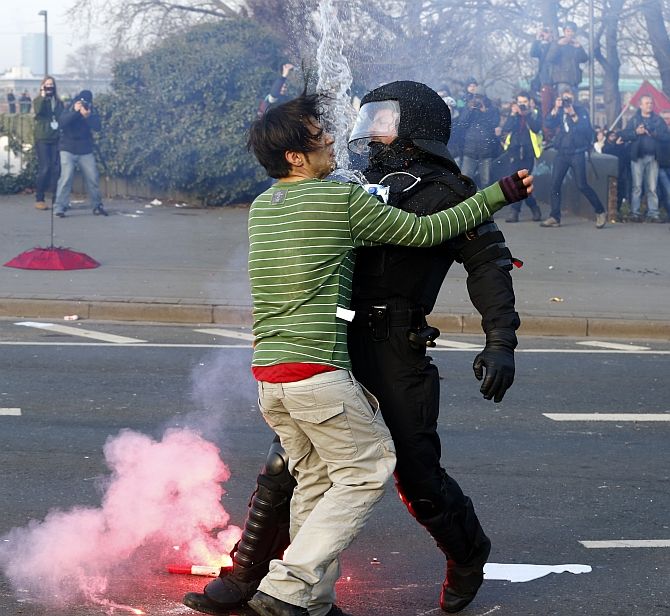 Image: A policeman stops a 'Blockupy' anti-capitalist protester near the European Central Bank building before the official opening of its new headquarters in Frankfurt March 18, 2015. Photograph: Michael Dalder/Reuters 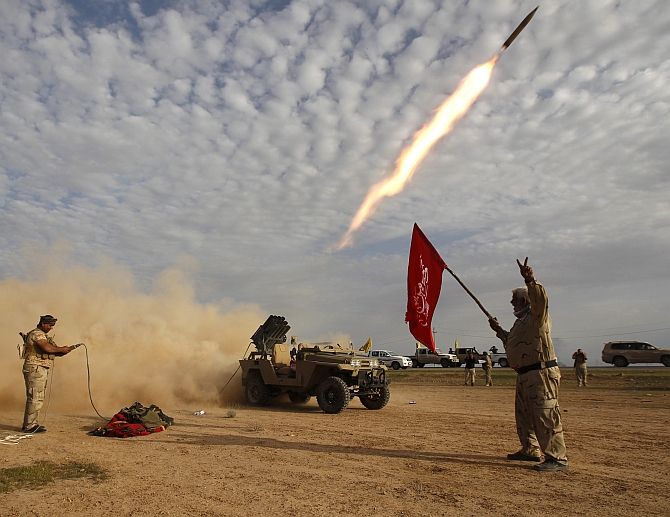 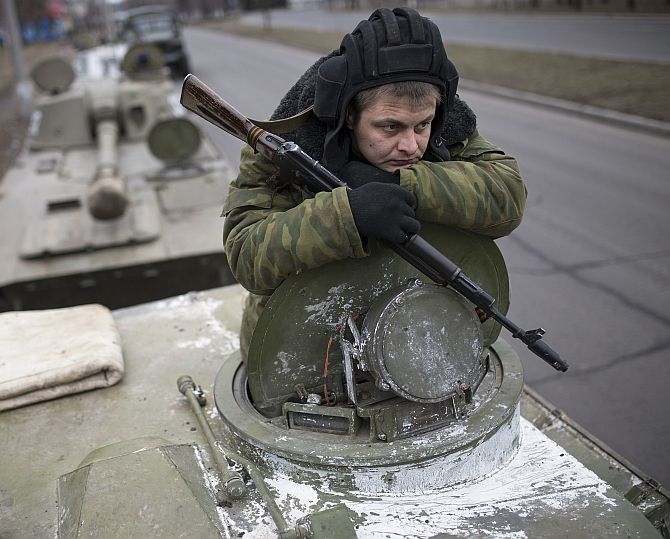 Image: An armed man of the separatist self-proclaimed Donetsk People's Republic army waits on top of a mobile artillery cannon for a convoy to start pulling back from Donetsk February 28, 2015. Photograph: Baz Ratner/Reuters 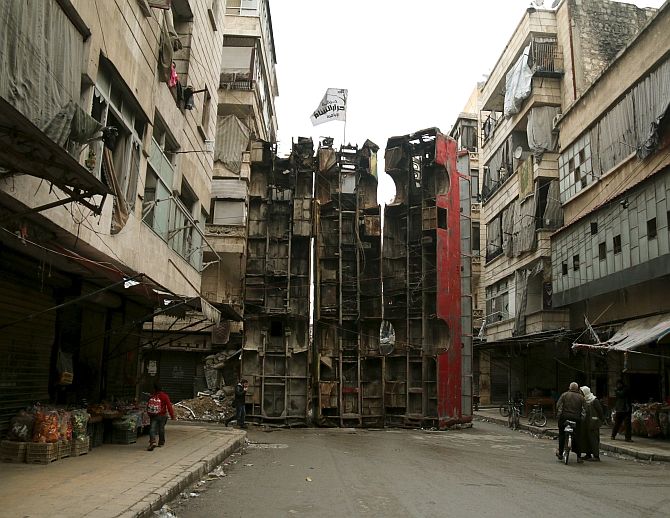 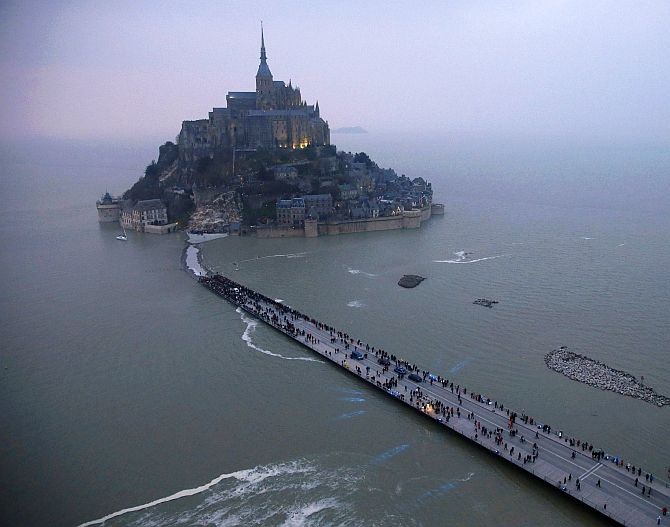 Image: An aerial view shows the Mont Saint-Michel off France's Normandy coast March 20, 2015. The Mont Saint-Michel 11th century abbey is expected to be entirely surrounded by the English Channel following exceptionally high spring tides. Parts of the French coast will be on alert for the so-called "tide of the century", with tidal coefficients of 118 and 119 respectively on March 20 and 21. Photograph: Pascal Rossignol/Reuters 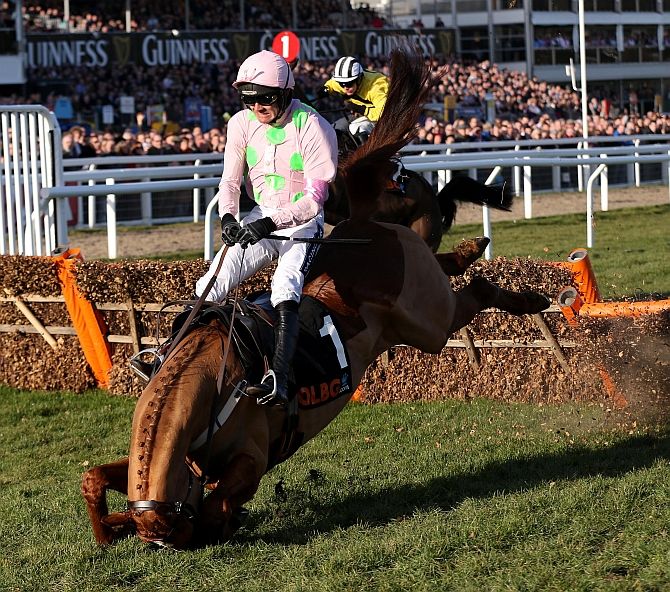 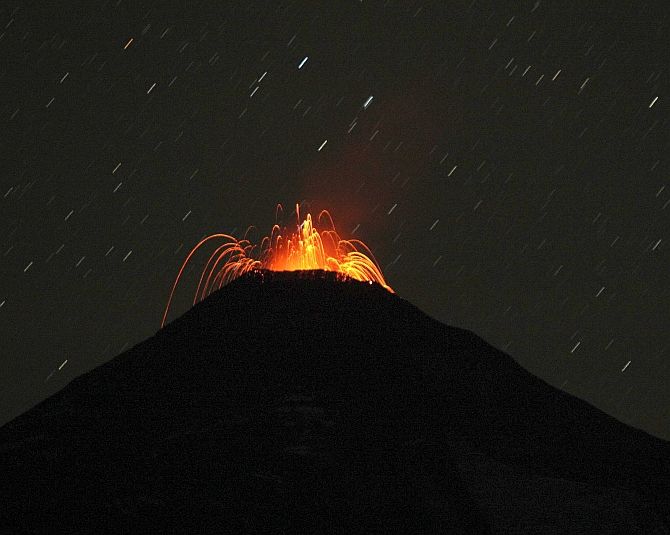 Image: Smoke and lava spew from the Villarrica volcano, as seen from Pucon town in the south of Santiago, Chile on March 27, 2015. The Villarrica Volcano expelled smoke as scientists warn the concentration of lava, contained within the structure, is close to the crater. On March 3, a short-lived eruption of ash and rock led to the evacuation of thousands from the nearby area. Authorities have restricted access to the area within 5 kilometres of the crater and have put the area under an orange alert, which means that an "eruption is probably in the short-term." Photograph: Cristobal Saavedra/Reuters 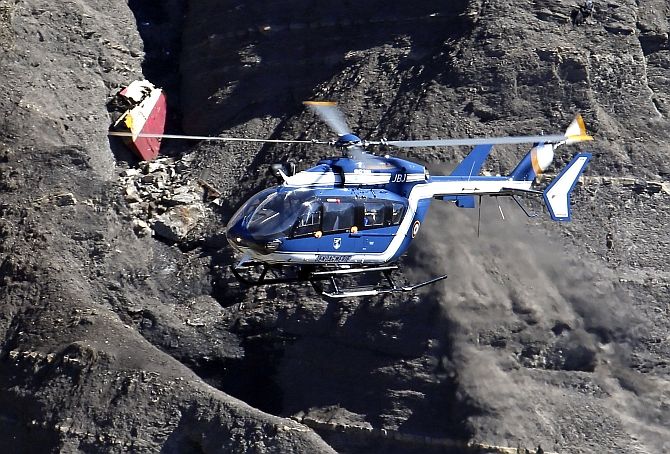 Image: French Gendarmerie rescue helicopter flies over the debris of the Airbus A320 at the site of the crash, near Seyne-les-Alpes, French Alps March 27, 2015. A young German co-pilot barricaded himself alone in the cockpit of Germanwings flight 9525 and apparently set it on course to crash into an Alpine mountain, killing all 150 people on board, including himself, French prosecutors said on Thursday. The pilot Andreas Lubitz, 27, who crashed a plane in the French Alps had received a sick note from doctors showing he suffered a health condition that would have prevented him flying the day of the crash, which he apparently hid from his employer, German prosecutors said. Photograph: Emmanuel Foudrot/Reuters 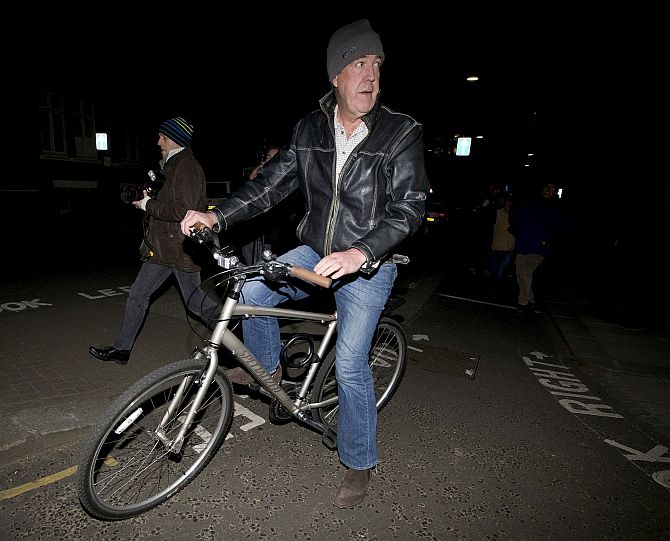 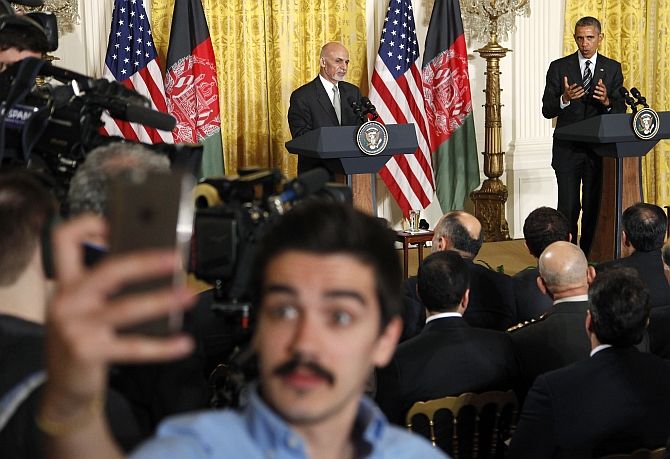 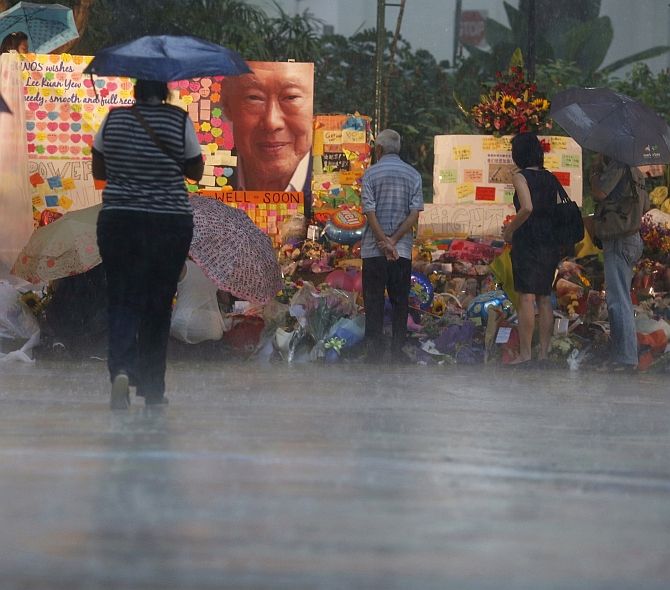 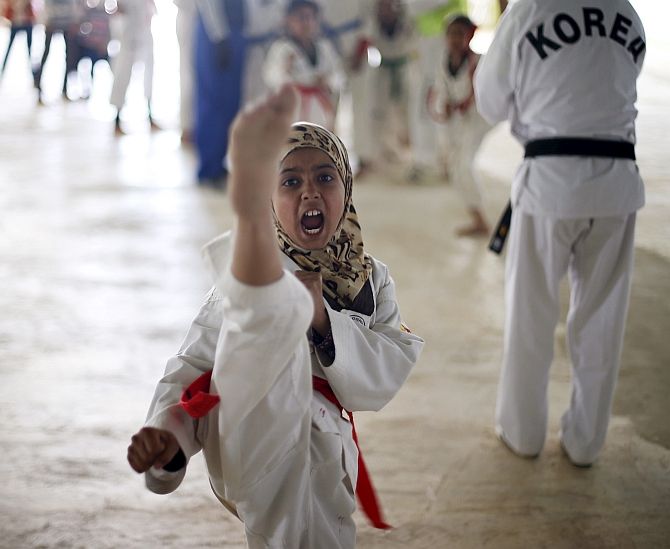 Image: Syrian refugee girls undergo training in the Korean Taekwondo Academy For Syrian Children at the Al Zaatari refugee camp in the Jordanian city of Mafraq, near the border with Syria March 24, 2015. According to the academy, which was founded in 2013 for Syrian refugee children and is affiliated to the Korea Food for the Hungry International relief organization, they have about 300 Syrian children taking martial arts classes that are held four times a week.. Photograph: Muhammad Hamed/Reuters 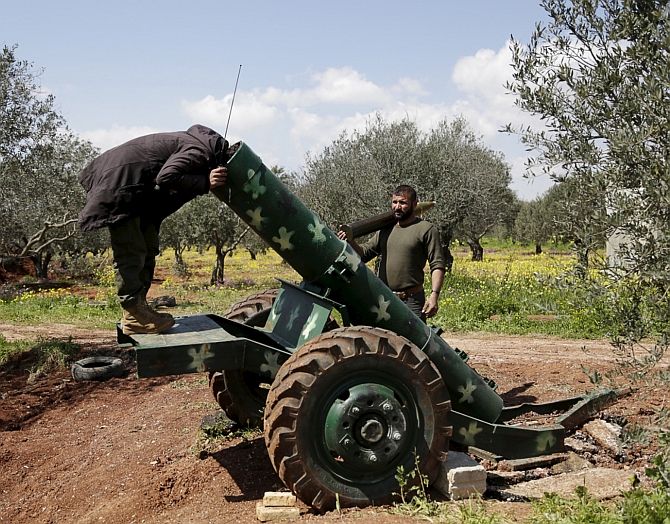 Image: A Syrian rebel fighter looks inside a cannon on the frontline of Idlib city in northern Syria March 23, 2015. Photograph: Khalil Ashawi/Reuters 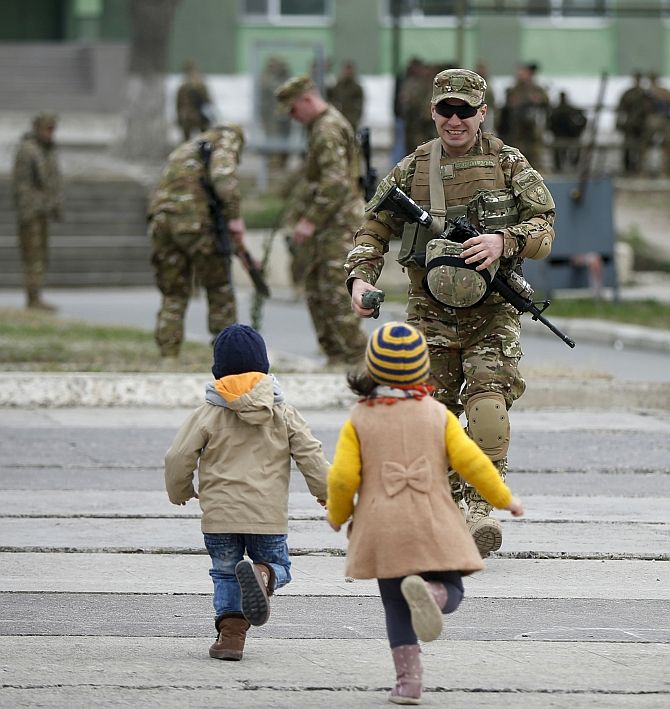 Image: A serviceman runs to meet his children after a farewell ceremony at the Vaziani military base outside Tbilisi, Georgia. According to Georgia's Defence Ministry, the 43rd battalion from the IV mechanized brigade of the Georgian Armed Forces is departing to Afghanistan to join a NATO-led mission called Resolute Support. Photograph: David Mdzinarishvili/Reuters 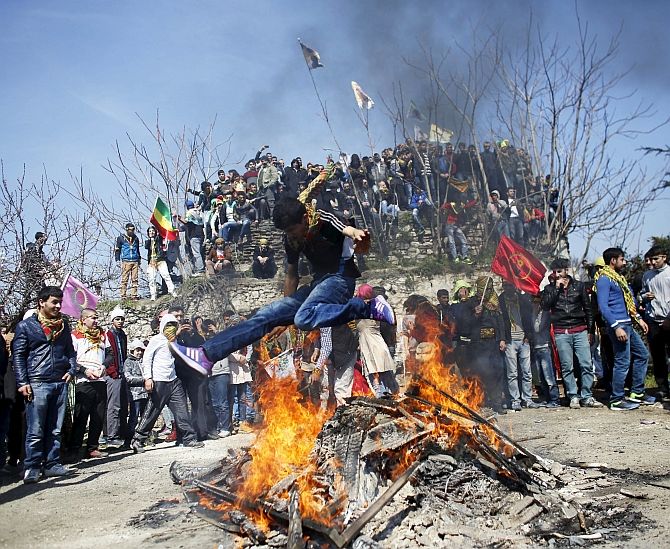 Image: A Turkish Kurdish man jumps over a bonfire during a rally celebrating Newroz, which marks the arrival of spring and the new year, in Istanbul March 22, 2015. Photograph: Murad Sezer/Reuters 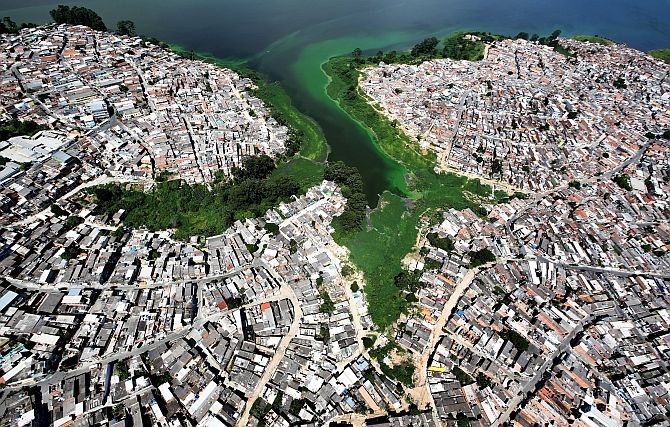 Image: An aerial view shows illegally built slums on the border of the polluted water of Billings reservoir in Sao Paulo February 12, 2015. According to local media, the Billings dam supplies 1.6 million people in the Greater ABC region of Greater Sao Paulo and the state government wants to treat the water to be adequate for human consumption, adding to the complexity of securing safe water supply during the drought. Brazil is facing its worst drought in 80 years and its economy is already expected to post zero growth this year. Worse yet, since Brazil depends on hydroelectric dams for about three quarters of its electricity, power shortages are also possible due to the drought, federal officials have said. Photograph: Paulo Whitaker/Reuters 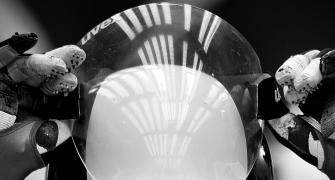 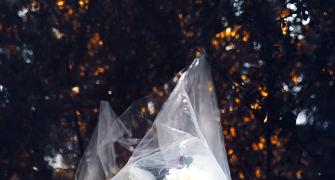 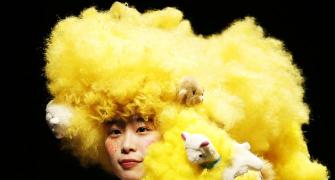 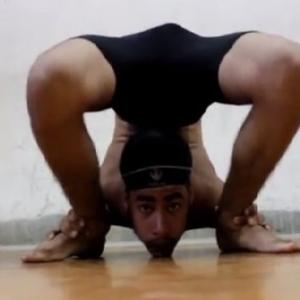 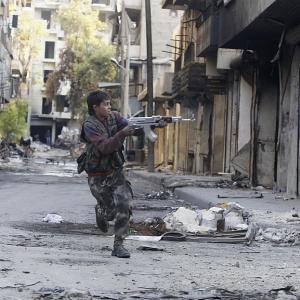