Restrictions to continue in Kashmir on I-Day 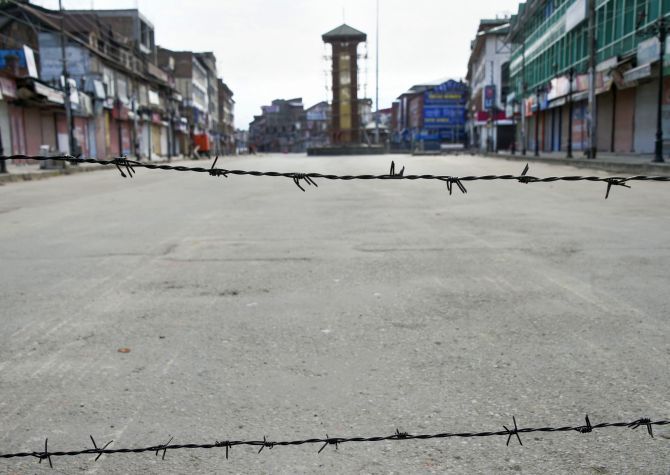 IMAGE: A view of a deserted street during restrictions at Lal Chowk in Srinagar,. Photograph: S Irfan/PTI Photo

He said further relaxations in prohibitory orders has been given in a large number of areas, including Srinagar.

"Local authorities, as before, are keeping a close watch on the situation and offering relaxations wherever the situation warrants it," he said, adding there has been no major report of any untoward incident in the Valley while civil supplies continue to be normal.

"Restrictions imposed in Jammu have been completely removed and schools and other establishments there are functioning. Restrictions will continue in some places of Kashmir for sometime," he told reporters in Srinagar.

He said there were 'localised incidents' in parts of Srinagar and other districts in the Valley, but these were contained and dealt with locally.

There have been no major injuries to anyone, he said at a press conference.

Khan said there were a few pellet injuries in the Valley that have been treated.

"Our biggest endeavour is to ensure there is no civilian casualty," he said

Kansal said arrangements to celebrate the Independence Day are complete in all the districts of Jammu, Kashmir and Ladakh.

"The general view is that the situation has been calm, relaxed, there have been no reports of untoward incidents which prompted relaxations. Based on local assessments, there will be some relaxations tomorrow and the general policy is to relax as much as possible," he said.

Asked about the number of people detained, Khan said he would not talk about individuals.

"In a law and order situation like this, there are different kinds of detention... preventive detention to ensure the established miscreants do not vitiate the peaceful atmosphere... so you have to take preventive steps," he said.

The main focus of the administration and the police is now on Independence Day celebrations on Thursday, the officer said.

"All arrangements are in place to ensure peaceful celebrations throughout the state," he added.

Meanwhile, former IAS officer and chief of J&K Peoples Movement party Shah Faesal was detained in Srinagar under the Public Safety Act (PSA) after he was sent back to Kashmir from the Delhi airport, officials said.

Faesal, who was bound for Istanbul, was detained at the airport during the intervening night of Tuesday and Wednesday, they said. His purpose of visiting Turkey was not immediately known, they said.

Asked about Faesal, Kansal said any detention or arrest is based on local assessment of law and order. "We do not comment on any individuals," he said.

The official insisted that sometimes reasonable restrictions are necessary in order to ensure that public order is not disturbed.

He said other major aspects including civilian supplies, medical facilities, availability of both normal and emergency medicines, power supply continue to be normal.

"We give you the information that we have, you are free to carry out your own verification and form your opinions," he said.

Kansal said Jammu and Kashmir has seen difficult time in 2008, in 2016 and on many occasions in the past.

The officer said a large number of devotees offered prayers on Eid on Monday and there was no report of any untoward incident.

Referring to the facilities offered by the administration, he said in Srinagar alone, almost 14,000 phone calls have been made by people through public call points.

Additional Director General of Police of Jammu and Kashmir Police Javed Gillani, who also spoke to the media in the evening, said there have been detention under the Public Safety Act (PSA) and some people have also been shifted out of the state

"As of now, as we speak, there are only two people in the hospital with some injuries, rest of them had got some minor injuries and discharged," he said.

Gillani also said the administration has put reasonable restrictions to prevent any law and order situation.

Restriction on movement and communication were imposed on August 5 when the Centre stripped Jammu and Kashmir of its special status and split it into two Union territories. 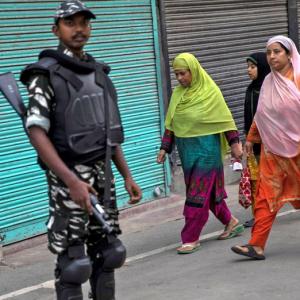