A day after meeting the family of a Dalit woman who died after she was assaulted and allegedly gang-raped in Hathras, Congress general secretary Priyanka Gandhi Vadra on Sunday demanded removal of the district magistrate and an investigation into his role in the entire matter. 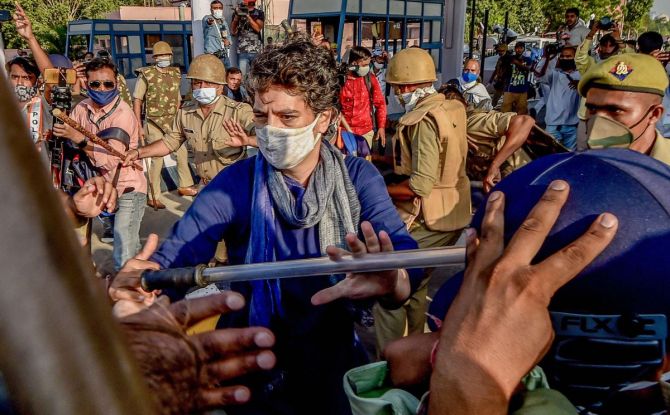 IMAGE: Congress leader Priyanka Gandhi at Delhi-Noida border as she attempts to move towards Hathras to meet family members of the 19-year-old woman who died after she was gang-raped, in New Delhi, on Saturday. Photograph: Ravi Choudhary/PTI Photo

Priyanka Gandhi said that according to the family, the district magistrate meted out the worst treatment to them, and asked who was protecting the officer.

In a tweet in Hindi, the Congress leader said, 'According to the aggrieved family, the worst treatment meted out to them was by the district magistrate. Who is trying to save him? He should be immediately suspended, and his role in the entire matter should be probed.

'When the family is demanding a judicial probe, then why is noise over CBI probe and SIT probe is going on.'

'If the UP government has even slightly woken up from its slumber, it should listen to the point of view of the family,' she said in another tweet.

Congress leaders Rahul Gandhi and Priyanka Gandhi met the family Saturday evening and declared that they would fight for ensuring justice to them.

"We will fight against injustice, and fight till justice is done."

Rahul Gandhi said, 'No power on earth' can stop the voice of this family.

Later on Twitter, he said the UP government will not be able to have its way as the entire country has now risen for justice to 'this daughter of the nation'.

After the Gandhis' visit to the family, Uttar Pradesh Chief Minister Yogi Adityanath on Saturday recommended a Central Bureau of Investigation probe into the alleged gang-rape and death of the 19-year-old Dalit woman that triggered a nationwide outrage. 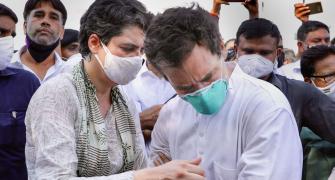 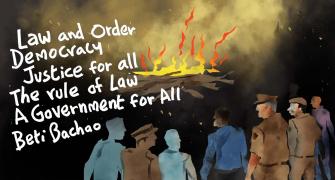 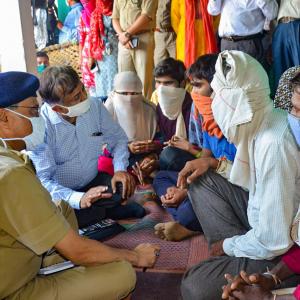 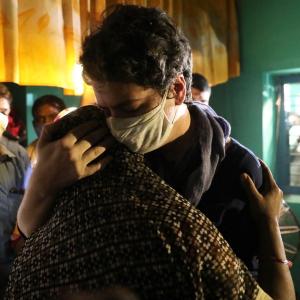