Multi-hued images of the country's rich cultural heritage and military prowess were showcased at the magnificent Rajpath in Delhi on Saturday as the nation celebrated the 59th Republic Day amid tight security.

The colourful parade, the main attraction of the national celebrations, marched down the street connecting magnificent Rashtrapati Bhavan and India Gate as President Pratiba Patil took the customary 21-gun salute.

A large number of enthusiastic people came to witness the parade that culminated at the historic Mughal monument of Red Fort.

Minutes before the parade began, the prime minister, Defence Minister A K Antony and chiefs of Army, Navy and Air Force laid wreaths at 'Amar Jawan Jyoti', the war memorial at India Gate where an eternal flame burns in memory of those who laid their lives defending the frontiers of the nation.

A massive ground-to-air security apparatus was put in place in Delhi in the wake of intelligence warning about possible strikes by terrorists.

Snipers of National Security Guards were deployed at all high-rises along the parade route.

Around 20,000 security personnel were deployed across the city while the commandos of the Indo-Tibetan Border Police and Delhi police kept vigil at important locations.

President Patil and her French counterpart arrived at Rajpath escorted by the President's bodyguards riding horses.

Following this, the parade began as four Air Force helicopters flew past unfurling the national tricolour as well as those of the three defence services.

The army then showcased its impressive armoury before the nation with indigenously developed frontline T-90 battle tanks, the Indian version of BrahMos, and surface to surface Agni missiles making its maiden appearance at this year's Republic Day parade.

The Israeli-upgraded 155 MM artillery guns also made its first appearance at this year's parade along with Dhanush Missiles and the long-range Smerch Rocket system.

Smartly-dressed navy personnel came along with a tableau depicting a model of INS Brahmaputra and INS Delhi, besides submarines.

The naval tableau, in keeping with its theme, 'Indian Navy: Professional Team, Proud Force' displayed all the arms of the navy -- surface, sub-surface and air.

The history of the Indian Air Force was unfolded as it displayed three historic milestones of the country's air prowess.

A model of Wapiti aircraft, the 1,732 kg single-engine fighter plane inducted in the IAF in 1932, multi-role combat Sukhoi fighter jets procured by the force in early 2000 and world-class frontline warships of Talwar Class Frigate were displayed by the air force.

A model of fighter Sukhoi, a globe and a satellite depicting the aerospace command and having air superiority by the induction of the multi-role aircraft into the IAF were other features of the IAF contingent.

An ex-servicemen's contingent and 13 Param Vir Chakra and Ashok Chakra awardees participated in the parade as four teams of the army band provided music for the march.

The Border Security Force's colourful camel contingent and the camel band, one of its kind in the world, also drew cheers from the thousands assembled.

About 80 students from eight countries, who are in the country as part of NCC's 'Youth Exchange Programme', also witnessed the parade.

A major draw was the breath-taking show by motorcyclists of the BSF who performed awe-inspiring stunts including 'bordermen salute', 'balancing, 'the guldasta' and 'pyramid'.

The grand finale came in the form of the zooming front-line flying machines of the Indian Air Force.

The Mi-26 and Advanced Light Helicopters were followed by a 'Big Boy' formation by an IL-76, two AN-32 transport aircraft and two Dornier planes.

Source: PTI© Copyright 2021 PTI. All rights reserved. Republication or redistribution of PTI content, including by framing or similar means, is expressly prohibited without the prior written consent.
SHARE THIS STORY
Print this article
List of Padma award winners
Peace time awards for braveheart Majors 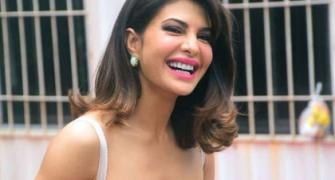