According to police officials, Mantu alias Monu was arrested from Jamshedpur in Jharkhand in connection with the killing.

Top police officials in police headquarters privately admitted that the police will disclose the name of people behind Mukhiya's killing in a day or two.

"We had identified the people behind the killing; the Special Investigation Team is collecting evidence before disclosing their names," a police official said.

"The SIT has brought the arrested man to Bihar for interrogation," an official said.

Two days ago, the SIT had arrested seven people from different villages in Bhojpur district in connection with the case, a police official said.

Singh, in his 70s, was killed by unidentified gunmen last week in Ara town.

The slain chief's close supporters had reportedly told the SIT and police officials including the state Deputy Inspector General of police Abhyanand that they strongly suspected Pandey's role, an MLA from Terari assembly constituency.

They also had suspicions about his brother Hulas Pandey, who is also a JD-U member of Legislative, a police official associated with the investigation in the case, told rediff.com on the condition of anonymity.

However, officially, the police is yet to confirm it. 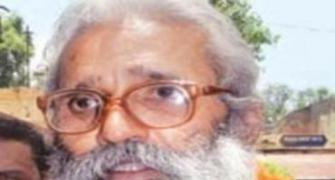