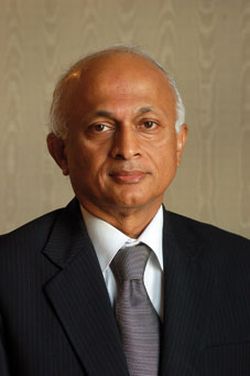 Veteran diplomat Ranjan Mathai on Monday assumed charge as new Foreign Secretary succeeding  Nirupama Rao and said he would try and work to restore "trust and confidence" in Indo-Pak relations.

Mathai, a 1974-batch Indian Foreign Service officer, moved into his office in the Ministry of External Affairs in South Block at around 9.25 am and assumed charge of the top post. He said maintaining an era of constructive cooperation in the immediate neighbourhood will be one of his priority tasks as Foreign Secretary.

On Indo-Pak relations, 59-year-old Mathai, who will have a two-year fixed tenure, said the mandate for the Foreign Secretary is to pave the way for a substantive dialogue with Pakistan on all issues.

"We have to try and work to restore trust and confidence...This is the mandate which has been given to me. Foreign Secretary is as much an institution as an individual. So I will continue this effort," he told mediapersons after taking charge.

"Continuity will be my watch word," he said. To a question whether composite dialogue is the "right ay" between India and Pakistan, the foreign secretary said, "The mandate is substantive dialogue on all issues of common concern."

Mathai, who has served in Indian missions in Vienna, Colombo, Washington, Tehran and Brussels, said India should develop "strong and cooperative relationship" with all global players.

"We need to keep in mind the need for very, very strong relations with countries in Latin America, Central Asia, South East Asia and the Gulf region," he said. Outgoing Foreign Secretary Rao has been appointed India's Ambassador to the United States.

Mathai said he was "greatly honoured" to take up the assignment which is a "very complex one and full of many challenges."

"We are in a world of flux and we have to be innovative and adapt to the situation as it develops. But at the same time, we have to be clear about what are our national priorities and interests, many of which remain permanent," he said.

In dealing with foreign policy challenges, Mathai said one has to take a holistic view of the political, strategic, economic, commercial, cultural and public aspects. He said he would like to give "considerable priority" to public services dimension of the Ministry of External Affairs like passport and consular services.

"I think this is an area that needs particular importance," he said.

He said the Ministry has to be administered according to the regulations and there is a management system which has to be addressed while keeping in mind the morale of the personnel.

After completing post graduate studies in political science at the University of Poona, Mathai joined the Indian Foreign Service in 1974. As Joint Secretary in the Ministry of External Affairs in New Delhi between January 1995 to February 1998, he headed the division dealing with India's relations with Bangladesh, Sri Lanka, Myanmar and Maldives.

He also served as Indian Ambassador to Israel from February 1998 to June 2001 and was the Indian envoy in Qatar from August 2001 to July 2005. He held the post of Deputy High Commissioner of India in the United Kingdom from August 2005 to January 2007.