News
Business
Movies
Sports
Cricket
Get Ahead
Money Tips
Shopping
Sign in  |  Create a Rediffmail account
Rediff.com  » News » We will take names of those who looted India: Ramdev

We will take names of those who looted India: Ramdev

Yoga guru Ramdev on Saturday deferred by a day the "big" announcement on his next course of action on black money and Lokpal Bill. He did not specify whether his fast was also being extended.

"Tomorrow, there will be an announcement on the big revolution to be staged in the country. We are waiting (for government's response) till this evening. Many things will happen tomorrow, not only in Ramlila Maidan here, but across the country," he told his supporters.

He said the agitation will move in a "new direction" on Sunday with the youth joining his movement.

Ramdev's announcement came after long meetings with his close aides during the day at the protest venue.

General V K Singh, who spoke at Team Anna's indefinite fast before ending it, will join the yoga guru at the protest venue on Sunday, a Ramdev aide announced at the venue.

Media was heckled at the venue as angry supporters objected to what they alleged was biased coverage of the protest. The crowd had dwindled from over 20,000 on the first day to less than half on the third day.

Earlier in the day, Ramdev said, "we will wait till evening (to hear from the government on our demands). Our three day deadline ends then. After that period is over, a roar will arise from this very Ramlila Maidan".

"We have not been taking names. But after that, we will take names who looted the country's wealth," he said.

Ramdev also said he will submit support letters collected from gram sabhas and Members of Parliament to President Pranab Mukherjee and urge him to put pressure on the government to act.

Source: PTI© Copyright 2022 PTI. All rights reserved. Republication or redistribution of PTI content, including by framing or similar means, is expressly prohibited without the prior written consent.
Related News: Ramlila Maidan, Members of Parliament, Lokpal Bill, K Singh, Ramdev
Print this article
'PM must show political will to get back black money'
Poster on Ramdev's aide triggers controversy 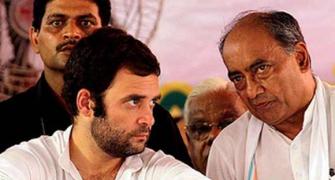 Digvijay is piece of garbage, Rahul his disciple: Ramdev 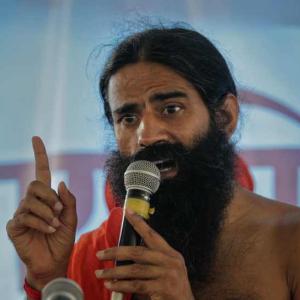