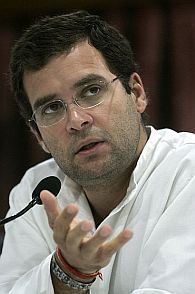 Both Joshi and Maken had resigned from the Manmohan Singh cabinet to be a part of Rahul’s team.

While Maken was handpicked by Rahul to head the party’s media department, which has now been renamed as the communications department, Joshi is in charge of Bihar, Assam and West Bengal and now he will be part of the strategic think tank of Rahul in the run up to the 2014 Lok Sabha elections.

Joshi has been close to Rahul for some time now, as he is known to be good with numbers and is also a straight talker who calls a spade a spade.

Sources say that Rahul has been impressed by the way Joshi uses the computer to cull out figures and facts. His knowledge of statistics is also said to have impressed the Congress vice president.

With Rahul and Maken holding a two-day media workshop, which concluded on Tuesday with the former emphasizing the need for the party to speak in one voice, highly placed sources say that the party is of the view that so-called controversy about Shakeel Ahmed’s tweet regarding Modi and the Indian Mujahideen being a fallout of the 2002 Gujarat riots, is more fuelled by BJP leaders.

Shakeel met Congress president Sonia Gandhi and Prime Minister Manmohan Singh on Tuesday. It is learnt that none of the two leaders mentioned the tweet which the BJP has been seething about. It is obvious that the party leadership does not disapprove of his comments as is being made out.