Seeking to court the Patel community, a section of which is up in arms against Gujarat's Bharatiya Janata Party government, Congress leader Rahul Gandhi on Tuesday invoked Sardar Patel's legacy as he took his campaign through Patidar dominated areas of Saurashtra region in the poll-bound state.

Hitting out at the BJP on the second day of his three-day tour, Gandhi accused the state government of perpetrating atrocities on the members of the Patel community during their quota stir.

On his arrival at Dhrol town enroute to Rajkot, Gandhi even wore the signature 'Patidar cap', with the slogan 'Jai Sardar-Jai Patidar' emblazoned on it, given to him by members of the Patidar Anamat Andolan Samiti, an organisation of politically influential Patel community led by Hardik Patel.

"It was you (the Patel community) who gave the country Sardar Patel. But the BJP government committed atrocities on you. Bullets were also fired on Patels. This is not the style of the Congress. We believe in moving ahead by keeping all the communities together," said Gandhi.

Interestingly, Gandhi's assault on the saffron party came on a day when the state government invited quota stir leaders and representatives of other communities to the state capital to try and reach a compromise formula to mollify them ahead of the assembly polls due later this year. A large number of PAAS members, along with others, gathered at Dhrol to listen to Gandhi.

Gandhi paid brief visits to several villages and towns having concentration of Patels.

The Congress vice president was greeted by Hardik Patel as he began his campaign on Monday.

Hardik had recently said the community should give a chance to the main opposition party if it promises to recognize Patels as OBC and give quotas for them in government jobs and educational institutions if voted to power.

After his speech at Dhrol, Gandhi stopped for a while at Latipur and Otala village, where he stepped up his attack on Prime Minister Narendra Modi over his government's policies and also took a jibe at the Gujarat model of development.

"Vikas Gando Thayo Chhe (Vikas has gone crazy)," replied the crowd when Gandhi asked them what has happened to 'Vikas' in Gujarat.

"It seems that vikas (development) has gone mad because some people lied too much about it. We all need to develop Gujarat in the real sense," said Gandhi.

"You (PM) are busy in floating 'jumlas' and making tall promises. That is your style of doing things. We in the Congress do not indulge in such things. As the PM, it is your job to give employment and solve problems of the country. If you can't, then Congress will do after that coming to power," Gandhi said.

The Congress vice president on Monday slammed Modi over issues like note ban, GST, farm policies and the 'Gujarat model' of development.

He also expressed confidence about his party winning the assembly elections, claiming that there was a strong undercurrent in favour of the Congress in Gujarat. 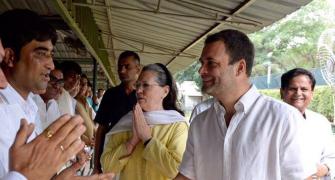 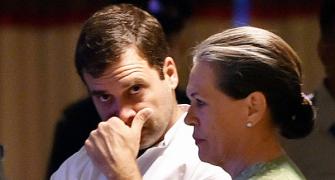