Rahul visits temple sacred to Patels ahead of Gujarat rally 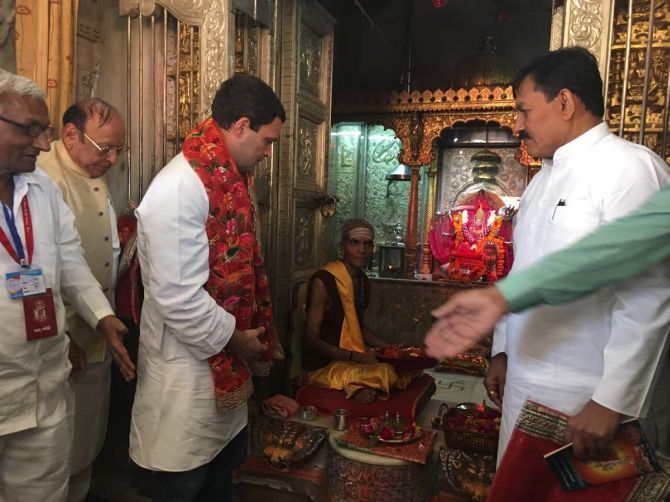 Congress vice president Rahul Gandhi on Wednesday visited the Umiya Mata temple in Unjha town of Mehsana district and offered prayers ahead of his rally.

Gandhi landed at Ahmedabad Airport around 1.30 pm and went straight to Unjha by helicopter to visit the Umiya Mata temple, where performed ‘aarti’ along with senior state Congress leaders, including Shankarsinh Vaghela, Bharatsinh Solanki and Siddharth Patel.

He was greeted by Congress workers into the temple premises where he was also offered some mementos.

Gandhi later left for Mehsana town where he is expected to address a rally.

The Patel community, a decisive vote bank in Gujarat, has two main sects -- Leuva and Kadva. Maa Umiya is the reigning deity of Kadva Patel community.

Gandhi’s visit to Umiya Mata temple at Unjha, which is around 25 km from Mehsana, holds significance in the wake of the agitation by Patel community for reservation under other backward castes category.

The entire north Gujarat belt, including Mehsana, has a sizable Patel population. The region witnessed some of the most violent protests against the Bharatiya Janata Party government on the issue of reservation as well as death of at least 12 Patel community youths during the violence in August last year.