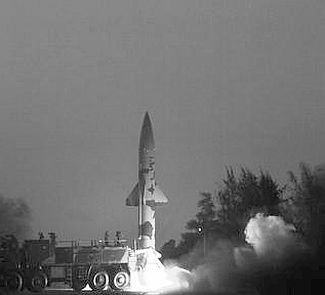 Two Prithvi-II nuclear-capable ballistic missiles with a strike range of 350 km were successfully test-fired in an hour's gap on Wednesday as part of user trials by the Army from the Integrated Test Range (ITR) at Chandipur off Orissa coast.

The missiles, mounted on mobile launchers and aimed at different targets, were test-fired from launch complex-3 in the ITR at around 0815 and 0915 hrs, defence sources said.

The test-firing of the sleek missiles, already inducted into the armed forces, were routine trials conducted by personnel of Strategic Force Command (SFC), they said.

"The entire trajectory of the twin trial was tracked by a battery of sophisticated radars, electro-optic telemetry stations and ships launched in the down range impact point area in the Bay for post-launch analyses," the sources said.

During the last user trial from the same launch complex on September 24 this year, the missile had failed to perform due to some technical problems.

"Prithvi-II missile had proved its robustness and accuracy repeatedly during many trials earlier," a Defence Research and Development Organisation (DRDO) official said.

The missile, having required features to deceive any anti-ballistic missile, had demonstrated flight duration of 483 seconds reaching a peak altitude of 43.5 km during user's trial in 2008. Similarly, as part of operational exercises by armed forces, two Prithvi-II missiles, aimed at different targets at 350 km from launch point of ITR were successfully launched within minutes of each other on October 12, 2009 and all mission objectives were met, sources said.

The twin trials conducted on Wednesday proved the accuracy and precision capability of Prithvi-II and would go a long way in further development of the missile, experts said. Prithvi, the first ballistic missile developed under the country's prestigious Integrated Guided Missile Development Programme (IGMDP), is propelled by liquid propulsion twin engine.

With a length of nine meter and one meter diameter, Prithvi-II uses an advanced inertial navigation system with manoeuvring trajectory. The sleek surface-to-surface missile had proved its accuracy when the army test-fired it in a 'salvo mode' on March 27 and June 18 this year from ITR, Chandipur. It was the fourth successful Prithvi-II flight within a period of eight months.