Seeking 'judicial statesmanship', senior advocate Rajeev Dhavan on Tuesday urged the Supreme Court not to make Prashant Bhushan a 'martyr' by punishing him for contempt over his tweets criticising the judiciary after the activist-lawyer rejected fresh suggestions from the court for an apology. 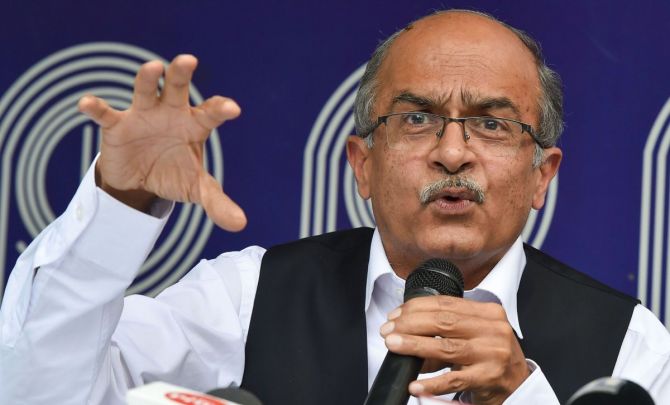 As the top court reserved its verdict on the sentence to be awarded to Bhushan, Justice Arun Mishra, who presided over a three-judge bench, at the fag end of the nearly three hour-long hearing also asked why he cannot seek an apology and what was wrong in using this word.

Dhavan, representing Bhushan, suggested that the top court recall the August 14 verdict convicting him for contempt of court and not impose any sentence and urged it to not only close the case but also to bring an end to the controversy.

Attorney General K K Venugopal requested the court to forgive Bhushan with a message that he should not repeat this act.

The bench that included Justices B R Gavai and Krishna Murari, which in the forenoon also gave 30 minutes to Bhushan to 'think over' on withdrawing his statements made in the court, said he made 'disparaging remarks against the institution and the judges'.

"The AG has suggested reprimand but that would be extreme. My humble and most respectful submission is that do not make Prashant Bhushan a martyr. The effect of the punishment could be that he will become a martyr. Please do not do that. He has not committed murder or theft. Don't make him a martyr," Dhavan said.

"We all want this controversy to end. This can end only by judicial statesmanship," he said, suggesting that 'the convicting judgment should be recalled and no sentence should be imposed. I am making a statement on my client's behalf'.

Venugopal said Bhushan, who has been refusing to tender unconditional apology for the tweets, should withdraw all statements and express regret.

The bench on August 20 had granted time till Monday to Bhushan to reconsider his 'defiant statement' and tender 'unconditional apology' for the contemptuous tweets.

"Tell us what is wrong in using the word apology. Why cannot he seek apology? Will that be his reflection of the guilt? We are not talking about Prashant Bhushan but generally. Apology can heal many things. Even Mahatma Gandhi used to seek apology," Justice Mishra said.

Referring to Bhushan's statements and his refusal to apologise, the bench told Venugopal that mistakes were committed by all but they needed to be accepted and said that here Bhushan was not willing to accept that.

"We have to be respectful to each other and tolerant. We are not separate from you (lawyers). We have also come from the bar. We are open to criticism but we cannot go in public," the bench said during the hearing.

Justice Mishra said that judges cannot go to the press to speak their mind.

"We are not carrying prejudice against anyone. Don't think we are not tolerating criticism. There are several contempt petitions pending but tell us has he (Bhushan) been punished ever. It is painful to see such things happening at the time when I am demitting office," he said.

Venugopal said that one more chance be given to Bhushan for expressing regret as the top court has said in the Arundhati Roy contempt case that 'shoulder should be broad enough to shrug off the comments against the court'.

The AG said he (Bhushan) has not hesitated in saying that he has the greatest respect for the Supreme Court, so if the activist-lawyer expresses regret then according to him it should be the end of the matter.

Dhavan referred to the August 20 order in the matter and said it appeared that the contemnor was being coerced to tender an unconditional apology to get away from the case.

"This is a wrong jurisprudence. This court never does so. An apology cannot be made to escape the clutches of law. An apology has to be sincere," he said.

"All of us are troubled by what has happened in the past six years in the Supreme Court but though I am equally proud when the courts have taken a stand during this period," he added.

Dhavan said reprimanding Bhushan like don't do it again as suggested by the Attorney General will not be correct and instead a statesman like message should be there like 'Mr Bhushan though we disagree with many things but from next time you should be more responsible'.

In a reprieve to Prashant Bhushan in another matter, the Justice Mishra-headed bench decided to refer to another bench the 2009 contempt case against him and journalist Tarun Tejpal to deal with certain larger questions related to freedom of speech and levelling of corruption charges against the judiciary.

The apex court in November 2009 had issued contempt notices to Bhushan and Tejpal for allegedly casting aspersions on some sitting and former top court judges in an interview to news magazine Tehelka. Tejpal was the editor of the magazine.

The court was told by Dhavan that 10 questions of constitutional importance have been raised by him and they needed to be dealt by a Constitution bench.

It did not undertake the hearing due to paucity of time as Justice Mishra is demitting office next week.

In the contempt case relating to Bhushan's tweets, Justice Mishra said that it appears to be a systematic attempt to denigrate the institution as statements even before it is made in court reaches the press and is all over the media.

Justice Mishra said that one can criticize the judgments but he cannot attribute motive to the judges.

Bhushan had in his statement had refused to offer an apology to the Supreme Court for his two tweets against the judiciary, saying what he expressed represented his bona fide belief which he continued to hold.

"Bhushan says the Supreme Court has collapsed, is it not objectionable," asked the bench, adding that 'a person should realise his mistake, we gave Bhushan time but he says he will not apologise'.

The court can speak through orders only and even in his affidavit, Bhushan has made disparaging remarks against the judiciary, it added. 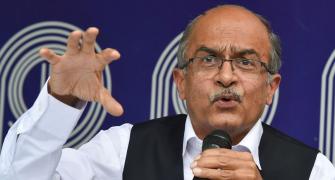 SC refers 2009 case against Bhushan to other bench