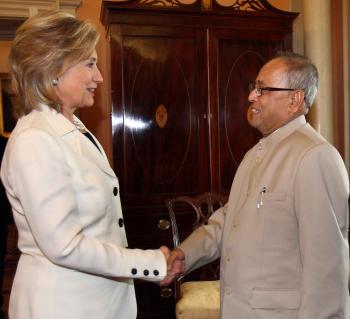 Finance Minister Pranab Mukherjee on Tuesday held a meeting with Secretary of State Hillary Clinton on the sidelines of a meeting of CEOs from India and the US.

They believed to have discussed bilateral relations, including economic ties. There was, however, no official word on what all came up for discussion between the two.

After the meeting, both the leaders joined the CEOs for a luncheon hosted by the state department in honour of the visiting Indian CEOs.

The meeting of CEOs, co-chaired by Tata Group Chairman Ratan Tata and Honeywell chief David Cote, discussed the draft recommendations, which are expected to be presented to Prime Minister Manmohan Singh and President Barack Obama during the latter's visit to India in November.

Emerging from the meeting, Tata, when asked, said the meeting went on fine. The CEOs Forum, which was reconstituted on the eve of the Singh's State visit to Washington last year, also discussed the ways and means through which the private sector from both the countries can contribute to enhance economic relations between the two countries.

"... We would be having the opportunity of reviewing the identified areas where deficiencies exits and how to improve those deficiencies," Mukherjee, who is leading the official Indian delegation to the meeting. He was interacting with Indian and American CEOs.

"There are some big, bold recommendations, that are going to take courage on both sides," President of the US India Business Council (USIBC) Ron Somers, who has been interacting with the CEOs on both sides, told PTI.

"On the Indian side, we are hopeful that the Monsoon (session) Parliament can open the education sector for foreign investment and lift the FDI cap in insurance," he said.

Among others are Biocon chief Kiran Mazumdar  Shaw; Analjit Singh of Max India and Deepak Parekh of HDFC.

Image: Pranab Mukherjee with Hillary Clinton at the state department on Tuesday.