A Trinamool Congress leader on Sunday said UPA Presidential candidate Pranab Mukherjee had all along been a "close friend" of the Marxists from the beginning of his political career to its end.

Subrata Mukherjee, West Bengal panchayet minister and an important TMC leader, said, "When Pranab babu began his political career in Bangla Congress in the 1960s, he was helped by the Marxists and remained a friend of the CPI-M even in the middle of his career."

"And now, when he is leaving party politics, he is again receiving

help from the Left parties. He has been a very close friend of the CPI-M all through his life," he said.

The CPI-M has given support to Pranab in his bid to become the President whereas the Trinamool Congress, though being the most important ally of the Congress in the UPA coalition, is yet to make up its mind whether to support him.

The former Union finance minister will fight against former Lok Sabha speaker P A Sangma, who is supported by the BJP, BJD, AIADMK and some other NDA constituents, in the July 19 Presidential election.
Source: PTI© Copyright 2022 PTI. All rights reserved. Republication or redistribution of PTI content, including by framing or similar means, is expressly prohibited without the prior written consent.
Related News: UPA Presidential, Trinamool Congress, CPI-M, AIADMK, BJP
Print this article 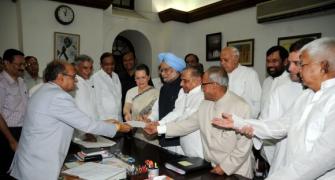