Mobile phones in Kashmir buzzed back to life on Monday, connecting 40 lakh post-paid subscribers to their families and friends in the country, the Valley and their neighbourhoods after 72 days but without any internet facilities. 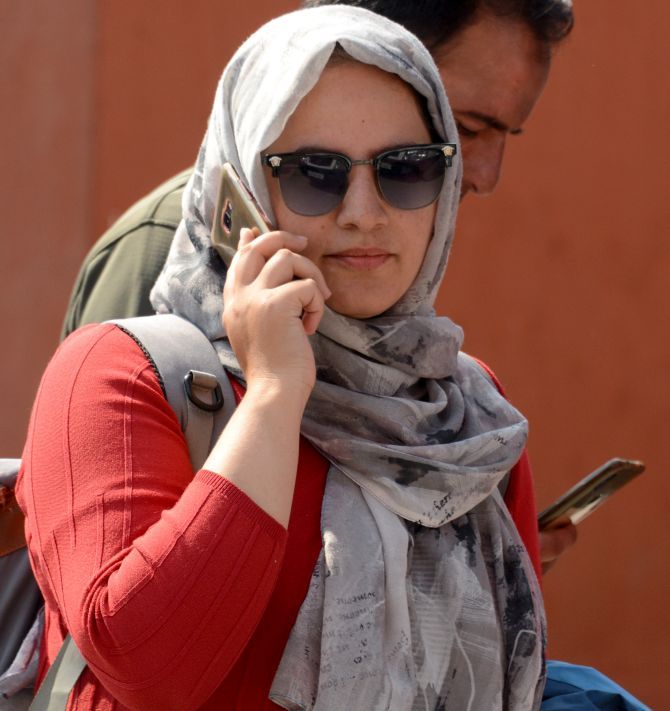 The phones started ringing from noon as promised by the government on Saturday and people across the Valley quickly dialled out to speak to those they had been unable to since August 5, when the Centre revoked Jammu and Kashmir's special status and reorganised the state into two union territories.

Over 25 lakh prepaid mobile phones and other internet services, including WhatsApp, will remain deactivated for now, officials said.

Connectivity was snapped exactly a week before Eid, celebrated on August 12. And so great was the relief on Monday that many Kashmiris wished each other Eid Mubarak.

Basharat Ahmad, a resident of the old city, lost no time in calling his friends and relatives within Kashmir and outside to just hear their voices after the long gap. In just an hour, he made 30 calls.

"I had not spoken to my relatives in Delhi and elsewhere outside Kashmir for 70 days. I want to hear from all of them and want to tell them we are still alive," Ahmad said.

It was a tough 72 days even for those whose loved ones stayed close by. 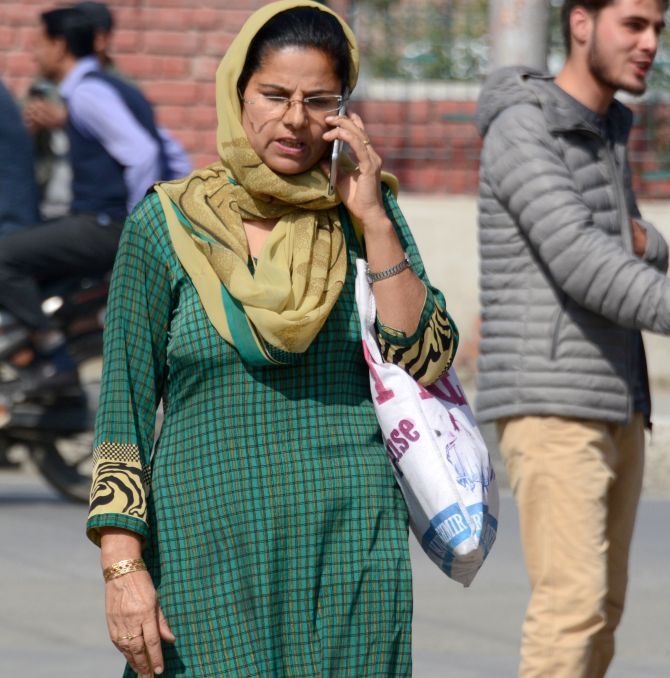 Yasir Ahad said he was talking to his fiancee when the lines snapped abruptly.

"I was not able to contact my fiancee who lives just five kilometres from my place. We got engaged in July this year and two weeks later we had no information about each others well being," Ahad said.

Ahad, who plans to get married next spring, said he would talk to his fiancee every day till the sudden communication blockade came into force in the early hours of August 5.

"I was talking to her when the signal went off. Initially, I thought there was something wrong with my phone but soon realised that the rumours ahead of August 5 were not unfounded," he added.

Security forces are fully geared to meet any challenge arising out of the opening of mobile communications, officials said.

The restoration of post-paid mobile phones of all services tops a number of steps taken in recent weeks to remove restrictions in the Valley.

Last week, the state was opened to tourists. Educational institutions are also open, but attendance has been slim.

On August 17, partial fixed line telephony was resumed in the Valley. On September 4, nearly 50,000 landlines were declared operational. The announcement that the services would be restored was made by Jammu and Kashmir Principal Secretary and spokesperson Rohit Kansal at a nationally televised press conference on Saturday.

Jammu and Kashmir Governor Satya Pal Malik had earlier said mobile phones were being used by terrorists to spread a hate campaign in the state.

Lack of mobile phone connectivity caused immense hardship to the people and the announcement of its restoration is the most significant step towards ending the communication blockade.

In Jammu, communication was restored within days of the blockade and mobile internet was started around mid-August. However, after its misuse, internet facility on cell phones was snapped on August 18.

Mobile communication in the Valley was shut down to prevent externally aided terrorists from disturbing peace and inflicting casualties, officials said.

"There are sustained attempts from across the border, both in the past and more so in the last two months, to promote militancy and terrorism in the state in order to create a sense of fear and terror among the people and keep the place in a disturbed condition," a senior official said.

Kansal had said restrictions were imposed in anticipation of Pakistan trying to foment trouble. Jammu and Kashmir Governor Satya Pal Malik on Monday defended the communication blockade in the Valley saying safety of Kashmiris was more important than mobile services which the terrorists use for their activities and mobilisation.

Mobile phones in Kashmir buzzed back to life on Monday, connecting 40 lakh post-paid subscribers to their families and friends in the country, the Valley and their neighbourhoods after 72 days but without any internet facilities.

"People used to make noise that there is no telephone. We stopped telephone services because terrorists were using them for their activities, mobilisation and indoctrination," Malik said at a function here.

"For us, the life of a Kashmiri was important and not telephone. People were living without telephones earlier also," he added.

Asserting that mobile phone services were restored now, he said people can go about their normal lives and claimed that tourists had begun arriving in the Valley.

He also ensured that internet services will soon be restored.

"Young boys and girls were having difficulties earlier but now they can speak to each other. Now, there are no issues. Very soon, we will restore internet services," he remarked.

The Governor said that the situation in Kashmir was normal and there had been no violence in the last more than two months.

He said in the last two months, "not a single bullet" was fired in the Valley and no protests had taken placed as he credited the security forces for their strict vigil.

"The prime minister (Narendra Modi) had congratulated me for this. I said that I am not worthy of the praise and you should thank the Kashmiri people and the police forces for taking steps to ensure that law and order is maintained," Malik said.