The National Investigating Agency has said that the charges leveled against Tawwahur Rana by the prosecution in Chicago are very similar to the information they have collected on the terror accused. The prosecution in its closing arguments made it clear that it was Tawwahur Rana who helped his friend David Coleman Headley carry out the 26/11 Mumbai attacks.

However, there was an interesting point made by the prosecution during the course of the arguments at the Chicago court. The prosecution apart from speaking about the 26/11 attacks had claimed that both Rana and Headley had plans for the future as well.

The NIA said that during their investigations they found that both Rana and Headley had set some future goals for India. Although the Inter-Services Intelligence was using both these men for global operations, the maximum data the NIA has managed to collect has been on India.

Sources in the NIA say that Rana had opened a branch office of his immigration law business, which is said to have provided cover for Headley when he went about scouting targets for the 26/11 attacks.

Rana had not only helped Headley for the 26/11 attacks, but also assisted him in each of his other operations, be it in Delhi or Pune, said sources. The agreement between the two was very clear; Headley had been trained to scout targets, while Rana, an expert with documents, helped him cover his operations.

The fact of the matter is that Rana was always in the know of what Headley was up to and they reported to the same handlers in Pakistan.

When the NIA manages to get permission to interrogate Rana, the questioning would be three pronged. The most important one would be pertaining to the 26/11 attacks, which would be followed by his ISI links.

The NIA also has in its possession certain documents relating to Rana's visit to Kochi in Kerala. Inspector General of Police, Loknath Behra said that the NIA had made some headway in its probe against Rana and in due course of time details will be made known.

Sources say that Rana was in Kochi to conduct a recce and local people helped him. Investigations so far have revealed that his visit was more of an exercise to lay the ground work.

Slain terrorist Ilyas Kashmiri had stated that he wanted cadres from Kerala to carry out his ambitious Ghazb-e-Hind project. When one looks at the Rana visit in the light of the statement made by Kashmiri, it clearly reveals Rana's reason for visiting Kerala. Moreover, Kashmiri was also in touch with Headley and their proximity is well-known.

Rana had visited Kochi under the guise of an immigration consultant. All through he was acting as per the instructions of the ISI, sources say. He may have set up fronts in Kerala like the way he did for Headley, so that terror cadres could carry out operations undercover.

The fact that Rana conducted a recce is yet to be ascertained, as he was not trained to do that.

The NIA says that his visit to Kerala was for a specific purpose and only his interrogation would reveal the exact details. When Rana was in Kerala, he had placed an advertisement in a local paper inviting visa seekers to both the United States and Canada. This, according to investigating agencies, was a cover up and this front was possibly used to get cadres under one umbrella of which Kashmiri spoke about.

The NIA which will probe Rana after the completion of the trial in Chicago will book him on charges of criminal conspiracy, sources said. 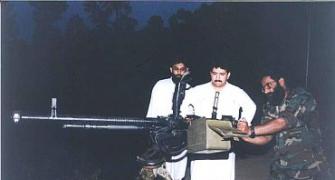