Nearly 70 per cent polling was recorded in the Uttarakhand assembly elections, which sealed the fate of 788 candidates including Chief Minister B C Khanduri and state Congress president Yashpal Arya.

The polling to elect 70 legislators to the state assembly largely remained "incident-free".

About 70 per cent of the 63 lakh voters exercised their franchise till the end of polling at 5 pm, state Chief Electoral Officer Radha Raturi told PTI.

The polling, which began on a dull note in the morning, picked up momentum as the day progressed.

Only 10 per cent polling was recorded during the first two hours till 10 am. However, as the day progressed, the number of voters reaching the polling stations increased.

Tight security arrangements were made for the election, which largely remained incident-free, Raturi said. The counting of votes will take place on March 6.

There are over 63 lakh electorates in the state where the ruling Bharatiya Janata Party is locked in a close fight with Congress.

Khanduri, who is BJP's chief ministerial candidate, said, "There is a very good response (from the people for the party)... We feel we will form the government comfortably but again it is for the people to decide."

After casting his vote, senior Congress leader Tiwari told reporters that there are bright chances of a change (of power) in the state. "People have seen the government of other party (BJP) in the past five years. I hope that they would now give a chance to Congress," he said.

The elections will also decide the fate of top state leaders including Khanduri from Kotdwar, Nishank from Doiwala, the Leader of the Opposition Harak Singh Rawat from Rudraprayag and Arya from Baajpur seats.

The main contenders BJP and Congress are both contesting all the 70 seats.

In the outgoing Assembly, the BJP has a strength of 36 members followed by Congress with 20, Bahujan Samaj Party (8) and  Uttarakhand Kranti Dal (3) while there are three Independents.

The Election Commission had made elaborate arrangements for the smooth conduct of polling, Raturi said, adding the poll personnel deployed in high-altitude areas were also provided with sleeping bags, snow-boot and jackets.

9,744 polling booths were set up across 13 districts in the state, of which 1,794 stations were declared as sensitive and 1,252 others as hyper-sensitive.

On the EC directive, all government, non-government offices, schools, colleges, industrial establishments and shops remained close today to ensure that the electorates could exercise their franchise. 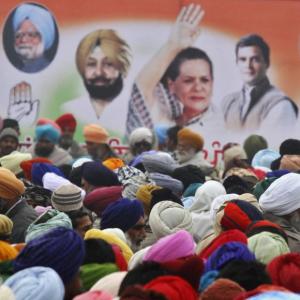 Tight security in place as Punjab, Uttarakhand go to polls