Kumar, a mathematician himself, said that by doing so, the prime minister had not only accorded honour to the great
mathematician, but also provided much needed encouragement to all those associated with mathematics in the country. He said that the announcement would go a long way in popularising mathematics as an academic discipline.

Kumar said it was heartening to see a prime minister expressing concern over waning interest in mathematics despite its huge potential in both pure science and social sciences. "I hope the government will now initiate concrete measures to popularise mathematics, which can happen only through competent teachers. It is important to use technology and have a system for preparing quality
teachers by acquainting them with new techniques and methodologies," he added.

Kumar said it was important for the country to produce quality mathematics teachers, who could make mathematics learning fun at the school level. "It is the school, which shapes a student. The teacher plays a key role. A good student at the school level excels at higher levels also. In mathematics, the key is to generate interest and it can happen only if the teacher is able to satisfy typical questions arising in the minds of students," he added.

The Super 30 founder said that the prime minister's concern that India was not producing enough mathematicians was valid and it needed a concerted approach to reverse the trend. "Nothing can substitute a good teacher. It is therefore important to accord respect to teachers and create an environment so that the talented ones felt encouraged to make a career in the subject  be it as a teacher or a researcher," he added.

He reiterated Singh's remarks that "the general perception that the subject does not offer attractive career possibilities is no more valid as new opportunities are now available to mathematicians". Anand said it was important to address the problem seriously and quickly.

"Teaching is a serious business and a good teacher is an asset to the society and the country," Kumar said. 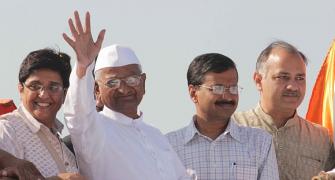 Anna's fast called off, but agitation to intensify A modern scientist, an ancient question