The Bharatiya Janata Party said on Thursday that Prime Minister Manmohan Singh appears to know about the problems plaguing the country as well as the solutions but he is unable to take action due to the United Progressive Alliance model of governance where the elected leader does not have the final say.

Leader of Opposition in Rajya Sabha Arun Jaitley said this while he expressed serious concern over the state of the Indian economy, saying the situation in the last year has been "extremely worrisome" and there is a "genuine worry" about where the country is headed.

Speaking at a CII programme here, Jaitley referred to the prime minister's speech delivered at the same forum on Wednesday.

"I have never really doubted his wisdom. He knew what the problem was. He probably knew the answers," Jaitley said, adding that despite this there are problems in solving them as he does not possess the powers.

"In a democracy, the leader must always have the last word. Unfortunately, in this government, the elected head does not have the last word," Jaitley said, in an apparent reference to the role of Congress President Sonia Gandhi.

The BJP leader said this has made it a "three-legged race" for the government as the leader of its party takes the decisions. He also sought to know what "roadmap" the government has to achieve its aim of 9 percent growth.

The BJP further claimed that growth depends on governance. "The quality of governance will decide how fast India moves," Jaitley said, adding that governance is in turn determined by leadership.

"Leadership needs clarity with respect to policy formulation and must have credibility. The government has to stop dragging its feet on important decisions," he said. 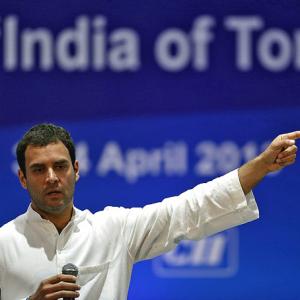