PM thanks Mamata for extending support to Pranab

Informing this, Trinamool Congress' Rajya Sabha MP Kunal Ghosh told PTI that Banerjee had called up the prime minister and told him about the party's decision prior to her press conference where he announced it publicly.

Earlier, Banerjee said at the press conference that the Prime Minister and Congress president Sonia Gandhi had rung her up to request her party's support for Mukherjee.

In a surprise move, Banerjee today announced her party's decision to vote for Mukherjee "in the interest of the UPA coalition, and in greater national interest and keeping in mind the people's interests". 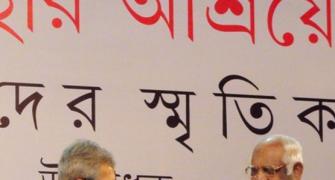 'Four-decade relationship with CPM ended just like that'
Special: How Congress used Mayawati to checkmate Mamata

Pranabda and the burden of two past Presidents