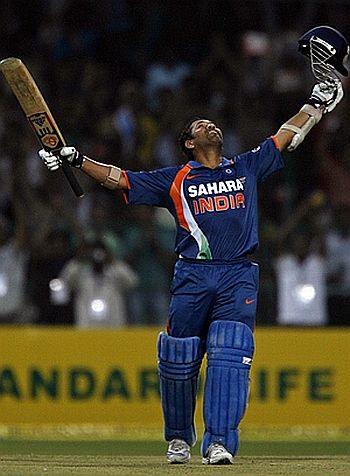 The magazine recognised the Indian prime minister's contribution towards liberalising the economy and now 'guiding India into the ranks of great powers.'

"The long history of India boasts many great leaders. But the much shorter history of Indian democracy is already creating its own heroes, and Manmohan Singh, 77, is one of them," Indra Nooyi, CEO of Pepsi, wrote in the magazine.

Former US president Bill Clinton Clinton heads the 'heroes' for his work as a fund-raiser and anti-poverty activist. The "leaders" list starts with the Brazilian President Luiz Inacio Lula da Silva who is recognised for his drive to bring social justice and end deep inequality in his huge Latin American country.

JT Wang, CEO of the Taiwanese PC maker Acer comes in at number two as a representative of the rise of Asian companies. The top US military officer, Admiral Mike Mullen, is third, with President Barack Obama only in the fourth slot.

Dr Perumalsamy Namperumalsamy, 70, was recognised for performing cataract surgery at the Aravind Eye Care Hospitals since 1976 and having treated 3.6 million surgeries to date -- a new one every 15 minutes.

"All people have a right to sight," Namperumalsamy is quoted as saying in the piece written by Brian Mullaney, co-founder of the Smile Train, which provides more than free cleft surgeries for children in developing countries.

"To millions of Indians and countless fans around the world, this act, which caps a career of record-breaking feats, arouses a sense of awe," he said.

The magazine recognised that humanitarian worker, Sanjit Bunker Roy', Barefoot College has trained more than 3 million people for jobs in the modern world, in buildings so rudimentary they have dirt floors and no chairs.

"Roy combines humanitarianism, entrepreneurship and education to help people steer their own path out of poverty, fostering dignity and self-determination along the way," it said.

A paramedic from Toronto, Rahul Singh was recognised for his relief work in Haiti in the aftermath of the devastating earthquake that hit the poor Caribbean nation on Jan 12.

Indian entrepreneur Kiran Mazumdar-Shaw was on the list for donating $ 2 million to support health insurance coverage for 100,000 Indian villagers.

Academy Award winner and Indian composer AR Rahman penned down his thoughts on Chetan Bhagat, "I've seen the effect Chetan has on his readers. He often writes about following your dreams and not bowing to others' expectations. That isn't easy in India, where family opinion matters and some professions are regarded as more serious than others."

Bhagat has written bestsellers One Night @ the Call Centre and Five Point Someone.

Indian-America doctor and Harvard professor Atul Gwande is also on the list for his contribution to medicine. "In this historic time for health policy, the need for smart, creative thinkers is greater than ever. Gawande certainly is one and it is equally certain his influence will grow," wrote former US State Senator, Tom Daschle.